After Sunmi showed support for his latest comeback, Park Jin Young took to Instagram to express his gratitude in a hilarious way!

On December 1, Sunmi shared a photo from the JYP Entertainment founder’s new music video for “Fever” on her personal Instagram account, asking her followers to “show love” for his new song and upcoming concert. Soon afterwards, she revealed that she had “lost about a hundred followers in a minute” since uploading the photo and jokingly added, “I didn’t mean to scare you guys… Chill out.”

Undeterred by the unexpected response to her first post, Sunmi persisted in showing her support for Park Jin Young. She later returned to Instagram to share another photo of the singer—this time, the cover image for his new single “Fever”—and playfully commented on her own post in English, “How much I’m gonna lose this time…” She then added in Korean, “[Park Jin Young] PD, you know I’m joking, right? Good luck!!!!” 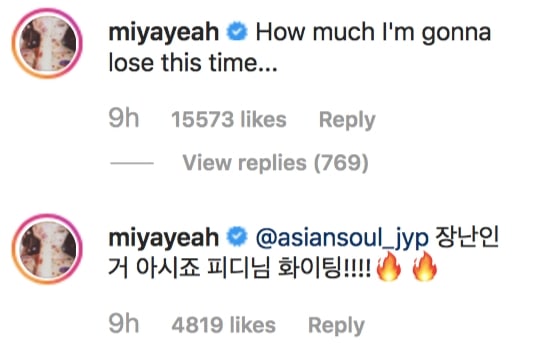 A few hours later, Park Jin Young shared a screenshot of Sunmi’s first post on his own Instagram account and wrote in both Korean and English, “Sunmi, I heard there were people who unfollowed you after posted this? I’m sorry.”

Sunmi jokingly responded to the post with a Korean acronym signifying that she was trembling in anger.

Sunmi originally made her debut under JYP Entertainment as a member of Wonder Girls in 2007. Although she parted ways with the agency in 2017, she has since maintained a friendly relationship with founder Park Jin Young, and both artists have often expressed their support for one another.

If you haven’t already seen it, you can check out Park Jin Young’s new music video for “Fever” here!