EXO’s Baekhyun discussed how he tried to get closer with SM founder Lee Soo Man.

On the November 4 episode of MBC’s “Radio Star,” EXO members Suho, Baekhyun, Chen, Chanyeol, Kai, and Sehun appeared as guests to promote their comeback with “Obsession.”

When the MCs asked if it’s true that Baekhyun feels uncomfortable around Lee Soo Man, Baekhyun replied, “It’s not that I’m uncomfortable, but I don’t have many chances to see him. I don’t feel envious, but I can feel that other agency CEOs and artists are close when I see clips of them. I think it was hard to get close to Lee Soo Man because he was always in a suit and tie whenever I saw him.” 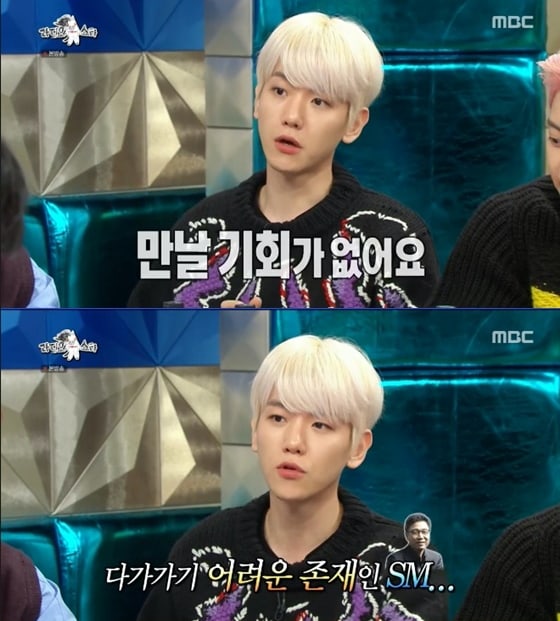 He continued, “But while promoting as SuperM, Lee Soo Man created a group chatroom and suggested we voice our opinions. In order to reflect that, I voiced my opinion over the phone while preparing for SuperM. He called me when my delivery food arrived, but we spoke on the phone for about three and a half hours. I got scolded a lot. He told me to voice my opinion, but I got scolded in return.”

“After listening to what he said, I realized that we can’t catch up to the discerning eye of the producer of a large agency,” said Baekhyun. “But my pork cutlet got way too cold.”

“After five years, I could start understanding the big meaning of the agency,” continued Kai. “I used to do it while feeling embarrassed, but I do it confidently. It feels as if it’s become our signature.” Kai added that they aren’t in charge of the computer graphics that add fire or make him “teleport,” so the members no longer feel like it’s an issue when they’re asked to show off their superpowers. 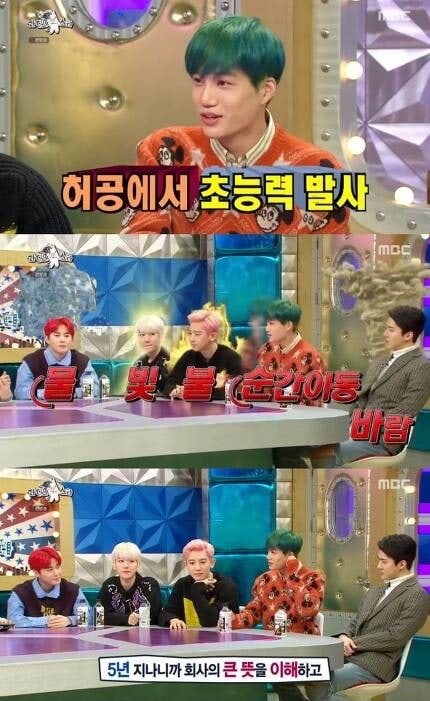 Sehun was asked about the time he wanted to avoid Lee Soo Man’s selection. “Before our debut, the agency told us our stage names,” said Sehun. “He began with Jun Myeon (Suho’s real name). He said, ‘Jun Myeon is Suho’ and the members burst into laughter because it was so funny. It’s not like he’s the guardian angel or something.” Suho explained, “It stands for defending EXO.”

Sehun continued, “He then announced Kai which sounded funny and cheesy at the time. My name was announced as Se-oul. My mind went blank. A few weeks later, they said to go with my real name since it would have been the same spelling as Seoul. That’s how I got to promote with the name Sehun.”

When the MC pointed out that Baekhyun was also promoting with his real name, the EXO member said, “I heard that my stage name was supposed to be something like Guan Yu.” 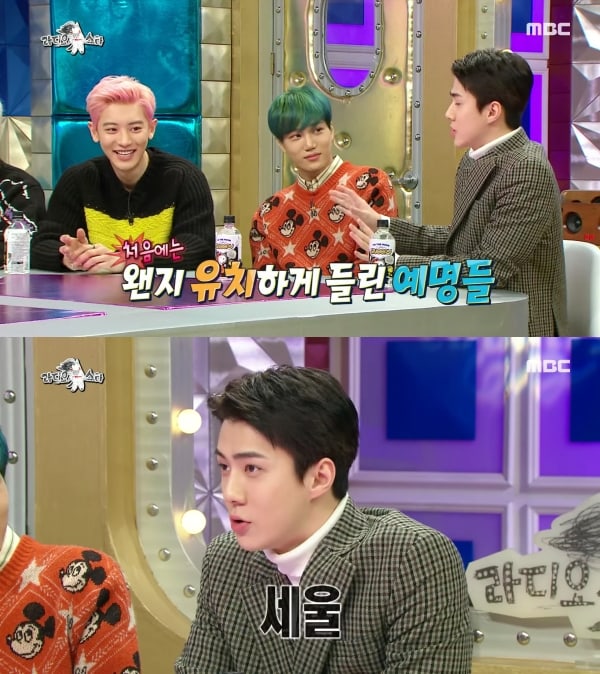 EXO
Radio Star
Baekhyun
How does this article make you feel?