The controversy surrounds the practice of sajaegi, the manipulation of sales numbers through an artist’s own agency bulk buying or streaming. In late November, Park Kyung wrote in a now-deleted tweet, “I want to do sajaegi like Vibe, like Song Ha Ye, like Lim Jae Hyun, like Jeon Sang Keun, like Jang Deok Cheol, and like Hwang In Wook ^^;;.” While the artists he mentioned are all taking legal action against him following the accusations, his comments have sparked a resurgence in calls for investigation into suspicious chart activity.

BTS won nine trophies at the ceremony on December 4, and during their speech for Song of the Year, Jin made a comment that appears to be about the industry’s recent controversy.

He played BTS’s “Make It Right” and said, “We listened to BTS’s song featuring Lauv. I saw that BTS won a lot of awards yesterday. They also gave a cool acceptance speech.”

Listeners also commented that his song choice seemed meaningful, due to the title of “Make it Right.” 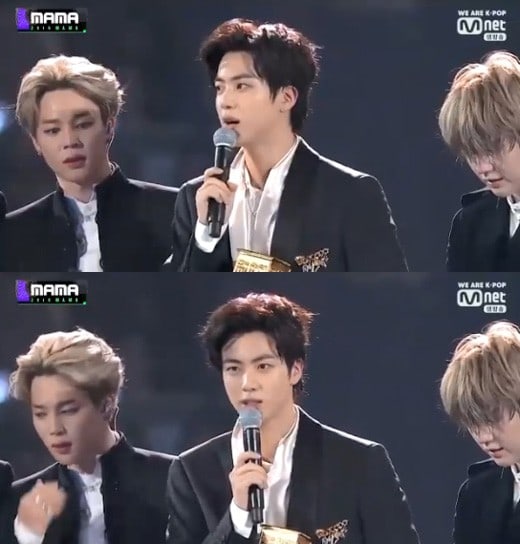 Many other individuals including Sung Si Kyung, the founder of Cube Entertainment, Crush, and Mommy Son have spoken up regarding the chart manipulation controversy, and an anonymous informant has put forth evidence that the manipulation does take place.

Note: This article has been edited for clarification.