On the December 8 episode of MBC’s “The King of Mask Singer,” the identity of contestant Park Shin Yang was unveiled! 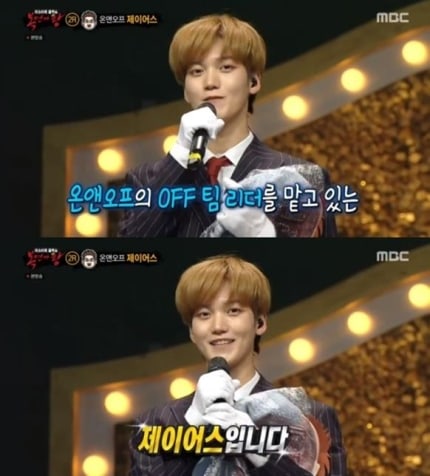 Yoo San Seul won the round with 65 votes to 34 and moved on to Round 3. Park Shin Yang took off his mask and revealed himself to be ONF’s J-Us!

ONF debuted in 2017 and is divided into two subunits: Team ON and Team OFF. J-Us is the team leader of OFF. He said on the show, “We’re a group that combines the emotional aspect of ON and the natural aspect of OFF.”

He added, “ON team leader Hyojin appeared on this show before. [B1A4’s] Sandeul also helped me a lot. He told me to sing with my story in mind.” ONF and Sandeul share the same agency, WM Entertainment.

J-Us continued, “I was really nervous singing a song by myself. I’m a dancer, so I don’t have a lot of opportunities to show my voice, but I want to keep challenging myself in future.”

Check out “The King of Mask Singer” here!

ONF
J-Us (ONF)
The King of Mask Singer
How does this article make you feel?