Tiffany shared her thoughts on her personal and professional life on MBC’s “Human Documentary: People Are Great.”

On the December 10 episode, the program chronicled Tiffany’s promotions in America which she described as “the first time in 15 years where we’re creating our own careers and controlling the pace.” 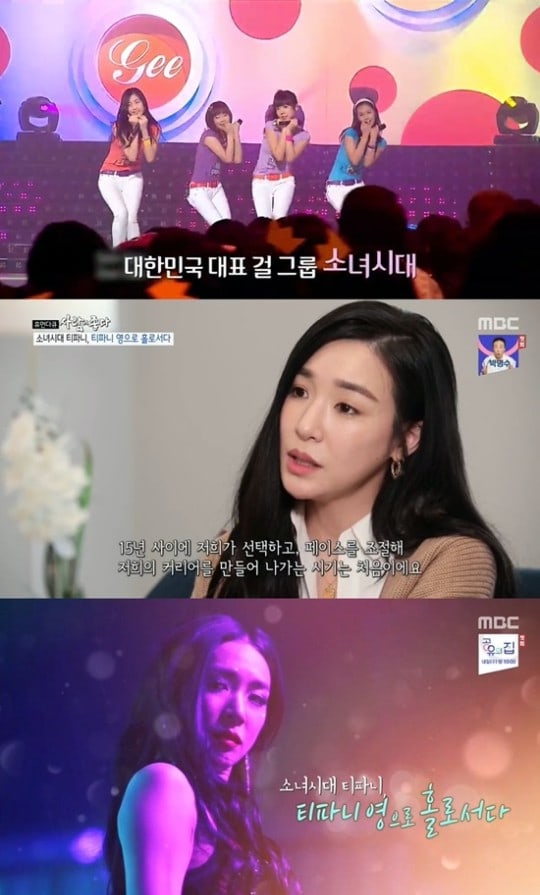 Tiffany released her first U.S. solo single “Over My Skin” in summer 2018 after signing with Paradigm Talent Agency under the name Tiffany Young. She explained, “I wanted to enter the U.S. market and wanted to try filling up the stage with my voice.”

Although she may appear shy when promoting with Girls’ Generation, Tiffany showed off her charisma as a solo artist in her 30s. She took the documentary staff on the road with her as she rehearsed and performed in America. She said, “It’s so fun” with a bright smile, and the audience cheered loudly in response. 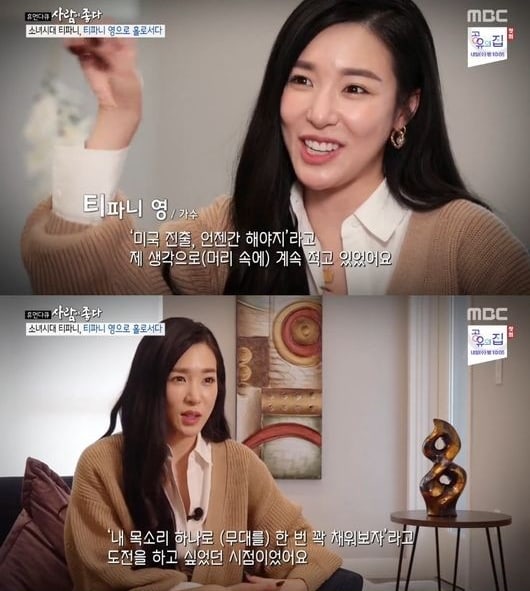 After the concert, she prepared for her next U.S. tour including 13 cities. On the tour bus, Tiffany said, “I took vocal lessons from the start all over again. Someone guided me when I promoted as Girls’ Generation, but I now have to take care of everything and go to the practice room on my own. It was like a test of patience. After setting out on my own, I thought about how I should be responsible until the end and spent meaningful time alone.”

A dancer working with Tiffany said, “She pays a lot of attention to everything including the stage set-up, costumes, makeup, and choreography. She’s not just a singer, but an artist who does everything. It’s like a dream come true being able to work with her.” 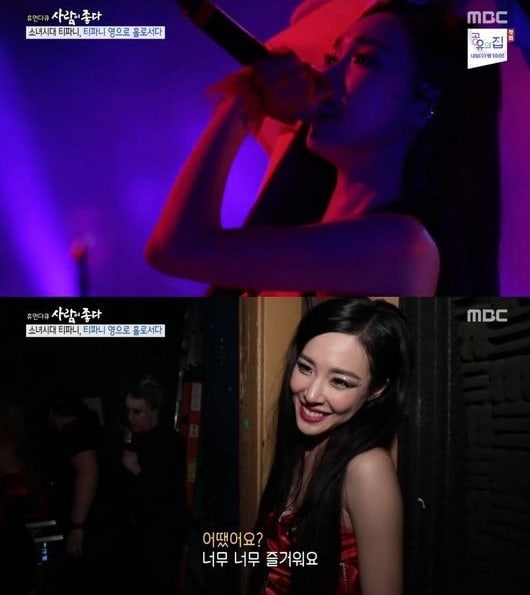 Tiffany was born in America and lost her mother when she was 13 years old. “After my mother passed away, music was what made me happy,” she said. “When I was thinking about becoming a musician, I was cast by a large agency at an audition.”

She then trained under SM Entertainment and debuted as a member of Girls’ Generation. Tiffany explained, “Out of 365 days in a year, I worked 340 days of them for eight consecutive years. I thought that I needed to take some time off and I had thought about resting, but I had never done so for the past 10 years. I really wanted to spend time with my family and older sister because I had worked without rest for 10 years to build my career.”

She continued, “I wanted to slowly create myself by studying, learning, and developing myself.”

She went on to talk about her family. In December 2018, Tiffany was mentioned in the news when her father faced accusations of fraud for an unpaid debt of 35 million won (approximately $29,354). At the time, the singer made a statement where she opened up about her difficult childhood due to her father’s issues and revealed she had repaid his debt multiple times in the past. She also revealed that she had broken off ties with him due to these ongoing issues.

Tiffany said on the show, “It’s important to try your best if you’re family. The situation was different then than it is now. We’re currently not in contact.”

She continued, “The moment my family’s story, which is very personal and something I had not spoken about, was revealed against my will, it felt a bit like my world was crashing down. I thought that I shouldn’t break down and approach it with honesty.” 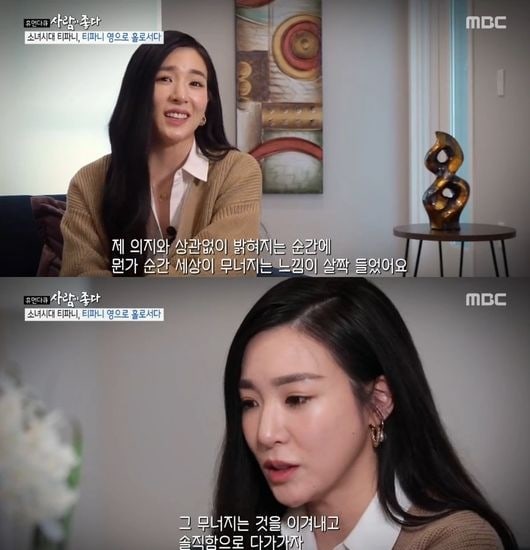 Opening up about her mental health, she said, “When I debuted when I was in high school, I had an obsession about appearing like a girl automatically on camera, speaking in a high tone, and having to give off good energy.”

She continued, “I received counseling to let some of this go and reassess myself. I’m also a human being who has feelings. I received a lot of counseling about being able to express when I’m mad, sad, or going through difficult times.” 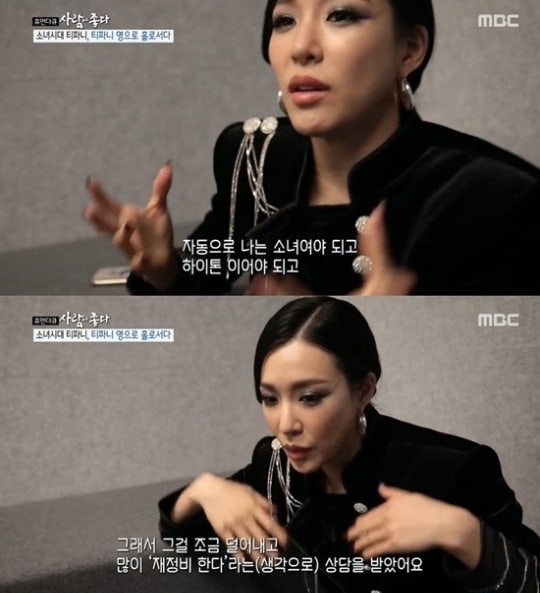 “There are times when you want to hide and give up, but I hoped that by gathering and showing courage, other people can also overcome their difficulties,” said Tiffany. “Now, I relate to the words, ‘It’s okay to not be okay.’ When depression came over me, my older sister told me, ‘It’s okay to not be okay, but you’ll be okay.’ I believe that other people will also be able to overcome their difficult moments if I show courage when I feel like hiding and giving up.” 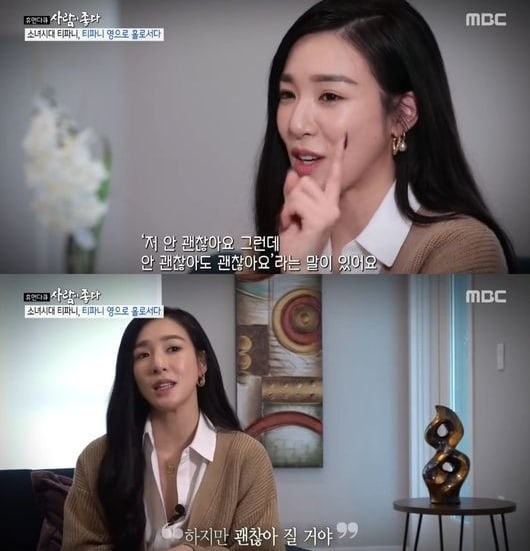 Tiffany also expressed her love for her Girls’ Generation members. She became teary watching video messages from Taeyeon, Seohyun, and Sunny. “I miss them,” she said. “I was able to start again thanks to the members’ support and I’m able to continue to challenge myself.”

She concluded, “I wanted to show you my life as I walked on the path that can’t be seen right now. I want to show that both the artist Tiffany and the person Tiffany are healthy and happy.” 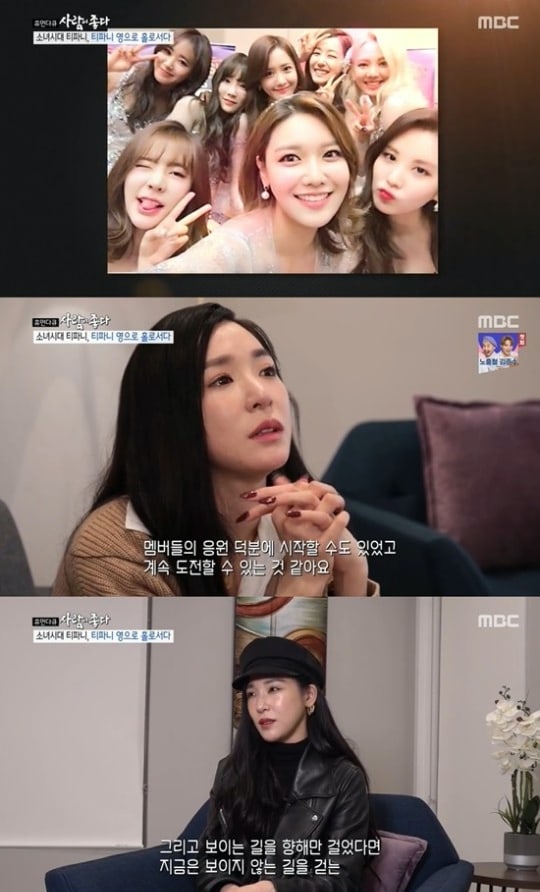 Girls' Generation
Human Documentary: People Are Great
Tiffany
How does this article make you feel?