Gong Yoo Opens Up About His Hiatus After “Goblin,” Why He Wants To Be Reborn As A Musician, And More

Gong Yoo spoke candidly about his career, thoughts, and hopes on SBS’s “Because I Want to Talk.”

The talk show also aired footage from Lee Dong Wook and Gong Yoo’s trip to Jeju Island. Lee Dong Wook asked, “What do you do when you’re resting?” and Gong Yoo answered, “I really like fishing. When I had too many thoughts and couldn’t sleep, I tried fishing and it helped a lot with my mental health.”

Actor Park Byung Eun joined them on a fishing boat to help the two rookie fishermen out. He said, “I think fishing is nice because you don’t have to think.” Gong Yoo agreed, adding, “It can help heal the emptiness after finishing a project. That’s why I think fishing is a good fit for actors.”

When asked what makes the person Gong Ji Chul (Gong Yoo’s real name) happy, he answered, “I’m an old guy who likes sports. The U.S. professional basketball NBA season has begun. I check the schedule beforehand and turn the TV on as soon as I wake up. That’s the joy in my life. I recently went to San Francisco to watch an NBA game live in person and it felt as if my heart was about to explode as soon as I walked into the arena. I’m not good at speaking English, but I stood up, yelled, and spoke as if the player were my friend.” Lee Dong Wook added with a laugh, “That’s what old guys do when they go to baseball games.” 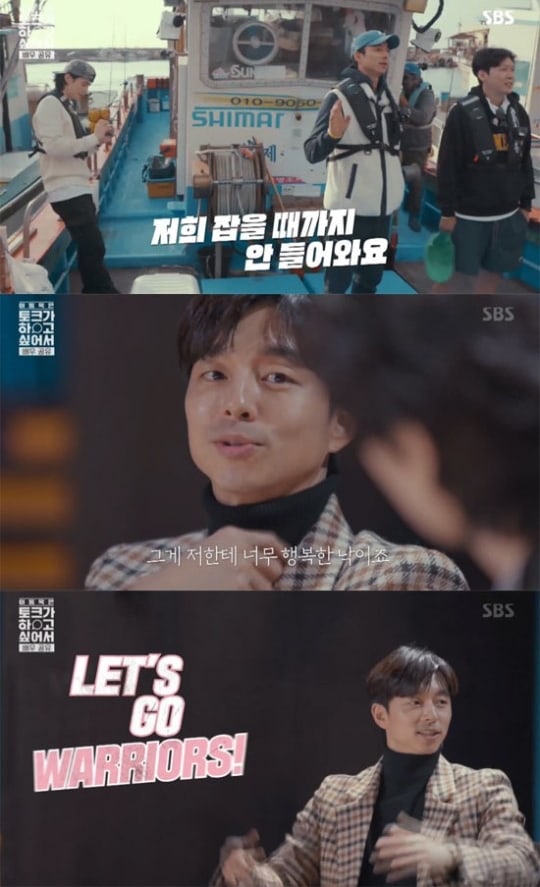 Gong Yoo also stated that he also enjoys watching films and recommended “Her” and “Moonlight.” He explained, “I’m interested in stories about marginalized groups.” Speaking about Clint Eastwood’s “Gran Torino,” he continued, “All of the things like each of his wrinkles and his hoarse voice seemed like his weapons. I hope I can age stylishly like that.”

He continued, “I don’t like horror films. I can’t watch them alone.” When Jang Do Yeon brought up his zombie apocalypse film “Train to Busan,” the actor replied, “The costume and makeup for ‘Train to Busan’ were so realistic that I fought to the death despite knowing that they were fake. I used all of my strength to run when they chased after me.”

Expressing pride in Korean recognition abroad, Gong Yoo commented on “Train to Busan” being recognized at the Cannes Film Festival in 2016. He said, “It was cool to see the work created in Korea with our effort was cheered and acknowledged by Cannes, which can be seen as the home [of films]. I realized that the status of Korean films had changed and I felt proud to be a Korean actor.”

He added, “This is a different genre, but I think that BTS is doing something amazing. They’re enhancing the nation’s prestige. I think these types of things are unique things that only culture can accomplish.” 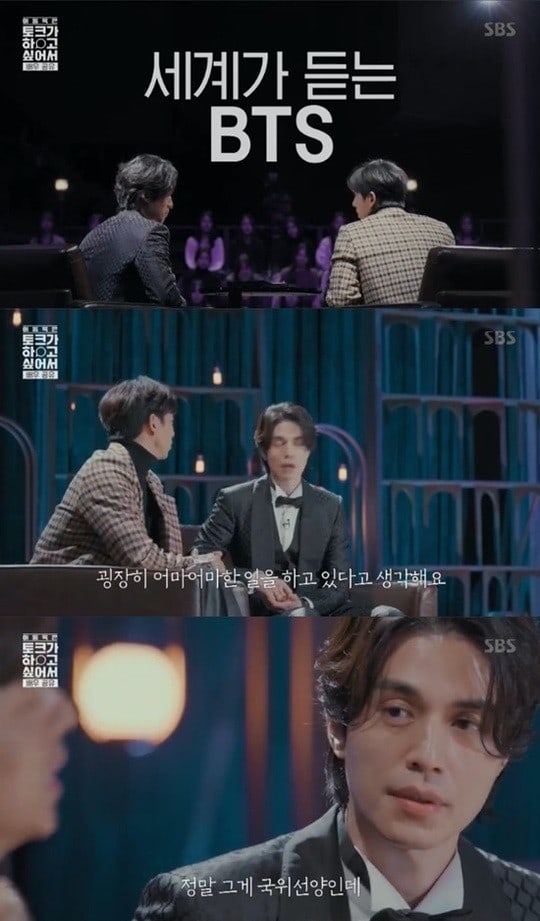 “I think musicians are great,” continued Gong Yoo. “If I’m born again, I want to become a musician. In some way, we’re tools used to express stories written by writers or directors in films and dramas. So if I’m reborn, I want to live life telling my story as a musician.” He added that he likes listening to ballads and that he’s a fan of Yoo Jae Ha and Kim Dong Ryul.

Gong Yoo also spoke on the topic of loneliness. “I feel it when I go home feeling really tired after work and turn on the light in a dark home,” he said. “I’m not someone who feels lonely a lot. I’m someone who doesn’t think that it’s difficult to be alone.”

Lee Dong Wook and Gong Yoo then pretended to go on a blind date with Jang Do Yeon and opened up about their thoughts on dating. Describing his ideal type, Lee Dong Wook said, “I like people who are maternal. I hope it’ll be someone I can lean on and someone I can talk with when I’m going through something difficult.” Gong Yoo added, “I think assertive women are charming. Times have changed and people no longer think that men have to be the ones who propose. I don’t have thoughts about getting married yet.”

Sharing his strengths as a partner, he added, “I’m someone who places importance on meals. I don’t confess right away if there’s someone I like. I’m the type to remember that feeling, but not the type to act on that feeling.”

Both actors admitted to sending text messages to ex-girlfriends in the middle of the night. When asked to choose between love and friendship, Lee Dong Wook chose love while Gong Yoo chose friendship.

Discussing his filmography, Gong Yoo brought up the popular 2007 drama “Coffee Prince.” “I didn’t appear in a lot of romance dramas,” he said. “It became engraved because many people liked it. I felt happy and burdened by it. It was a project I came across when I was feeling doubts as an actor. I actually worked hard not to do it. I was about to enlist in the military then in my 30s. I wanted to have my own unique characteristics, so I worried a lot. But it’s a project that reawakened my dimming passion, so it’s meaningful to me.”

He continued, “The 2011 film ‘Silenced’ was a critical time for me. I think I felt a lot of sympathy about the grim reality. I suggested it first. I felt angry when I read the original work and was in disbelief. I thought about what I could do as an actor and hoped that the audience would naturally feel the emotions.” 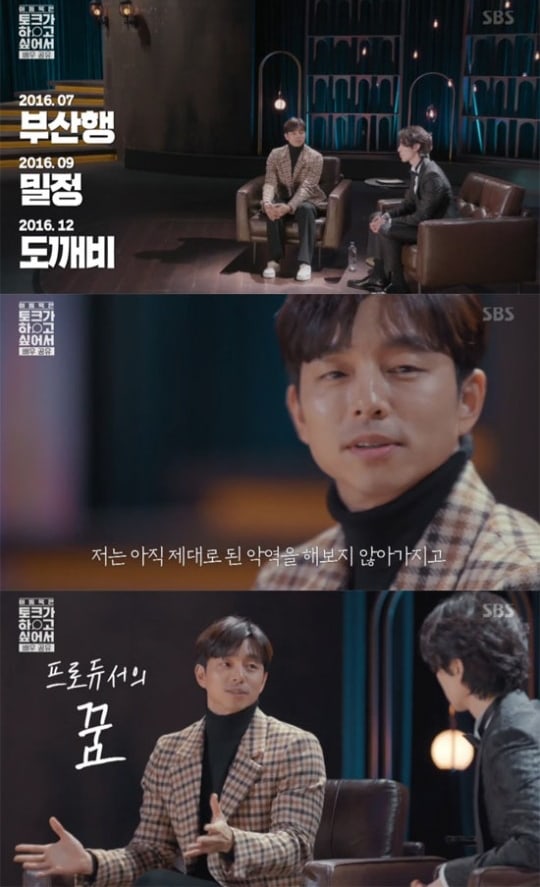 In response to the view that Gong Yoo favored films with heavy messages about society such as “Silenced” and most recently “Kim Ji Young, Born 1982,” he stated, “I don’t intentionally prefer films about society. I’m not someone with a bold enough personality to revolt. I think about what I can do as an actor. I want to act as a bridge for people to easily approach other people and stories about us. I think that it’s best to be a good influence when I can do so.”

As for his decision to appear in “Kim Ji Young, Born 1982,” Gong Yoo stated, “I thought that it wasn’t the story of one woman, but about the pain of a human being. That’s why I was able to appear in the film. My proudest moment was receiving text messages from my older male friends with children. I felt so happy when they said, ‘Thank you for showing me this film.'”

The actor also spoke candidly about his two-year hiatus after tvN’s “Goblin.” “It was a time where I needed to rest,” he said. “I felt a lot of pressure because it was so successful. I couldn’t fully enjoy that moment. I also felt as if I was being crushed down by it. I guess that’s just how much I can handle.”

Lee Dong Wook then thanked Gong Yoo for spotting his slump. Comforting the actor, Gong Yoo explained, “After going through it myself, I began to watch out for and observe small details. Every one calls for help in their own way. It’s necessary for someone to carefully watch you while being by your side.” Lee Dong Wook explained, “I gained lots of success and happiness through my character [in ‘Goblin’], but I went through a difficult time because I wasn’t experienced at separating my character from myself.”

Gong Yoo concluded, “I’m telling 10 years’ worth of stories. It’s my first time telling my story. Speaking about my past, I think I made a good decision coming on the show. I feel as if I’m slowly becoming an adult. I’m leaving after feeling emotions I had never felt before.”

Watch “Because I Want to Talk” now!

Lee Dong Wook
Gong Yoo
Because I Want to Talk
How does this article make you feel?