As of 2:30 p.m. KST on December 12, Baek Yerin’s new song “Square (2017)” has achieved a certified all-kill. The English-language song is one of the three title tracks of her album “Every letter I sent you” and had risen to the top of major music charts soon after its release on December 10 at 6 p.m. KST. 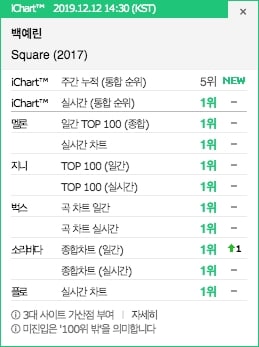 A certified all-kill is given to songs that score No. 1 on the daily and realtime charts of Melon, Genie, Bugs, and Soribada; and the realtime charts of Flo and iChart. It remains to be seen if Baek Yerin will also score a perfect all-kill, which includes topping the iChart weekly chart as well.

Congratulations to Baek Yerin on her first-ever all-kill!

Baek Yerin
How does this article make you feel?