Ha Jung Woo revealed the funny nicknames he came up with for his “Ashfall” co-stars.

During the radio show, one listener pointed out Ha Jung Woo is famous for coming up with good nicknames, so radio DJ Choi Hwa Jung asked if he came up with nicknames for his “Ashfall” co-stars as well.

Ha Jung Woo shared, “Suzy’s nickname is ‘President Bae.’ We have a big age difference, but she always pays first. When we hang out, she has a habit of going up alone and paying first. Ever since then, I’ve been serving her as the president.”

Then he revealed, “Ma Dong Seok hyung has a lot of nicknames, like Ma Dong Dong, Ma-vely, and more. So I just call him ‘Dong Seok noona,'” making everyone laugh at the unexpected answer. He explained, “Ma Dong Seok is delicate and sensitive. What’s even more funny is that he usually wears a mask. Anyone can tell he’s Ma Dong Seok, so it’s funny he still goes around with a mask on.”

About Jeon Hye Jin, he commented, “Jeon Hye Jin is interested in stocks, so I just call her ‘Super Ant’.” In Korea, individuals who trade in stocks are known as “ants.”

When it came to Lee Byung Hun, however, he revealed he hasn’t come up with one yet and added, “It’s too hard.” 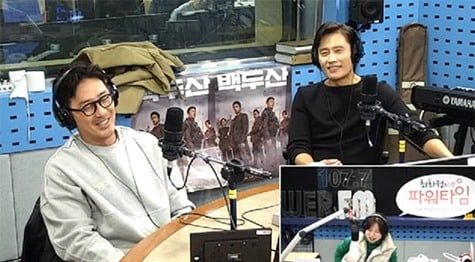 “Ashfall” follows what happens after a volcano on Mount Baekdu erupts, leading to pandemonium over fear of a final eruption that could wipe out both North and South Korea. A team of people set out to stop the terrible disaster from happening.

“Ashfall” hits theaters in Korea on December 19. Check out the trailer here!