Na Young Suk Promises To Not Make Any More Promises, Talks About “New Journey To The West” Costumes, And More

Na Young Suk shared his thoughts on his variety programs.

They first spoke about the “People Quiz” on “New Journey to the West.” A clip of Block B’s P.O. relieving his past sorrow after correctly guessing the Russian president Vladimir Putin went viral online.

Writer Choi Jae Young began, “We give easy questions. We didn’t think he’d get it correct when Putin was the answer, so everyone reacted with shock.” PD Na Young Suk said, “Before this, we prepared questions that would be fun for each member’s personality. But viewers kept saying it was rigged, so we can’t do that anymore. We really just ask questions in sequential order.”

Speaking about going to the East Sea for the “Music Quiz,” PD Na Young Suk said, “Because the weather is unpredictable, the writers always carry around people and music quiz questions with them.”

SECHSKIES’s Eun Ji Won and Lee Soo Geun‘s “Iceland in Three Meals” also created buzz for its five-minute air time. The writer explained, “It wasn’t a punishment, but a reward. I also went, and it was a series of mismatched words and actions. They didn’t want to go but had smiles on their faces, and they ate well although the food didn’t suit their tastes. Lee Soo Geun especially had some concerns about the long flight, but he had a good time once he was there.”

As for the five-minute air time, the PD said, “We think about trying new things, but we’re not strategic people. While talking about something, Kang Ho Dong said that we should film an Iceland episode for five minutes and add it at the end of ‘New Journey to the West.’ But they said this wasn’t allowed due to broadcasting rules, so we got a separate five-minute slot.” 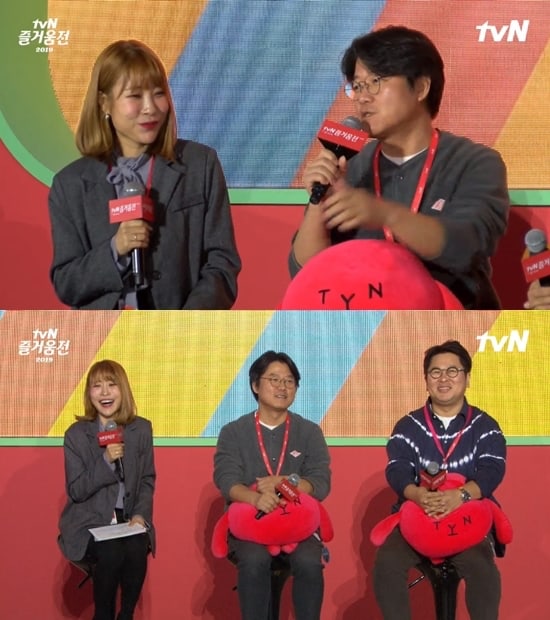 “New Journey to the West 7” caught viewers’ eyes with the cast’s hilarious costumes. Writer Choi Jae Young explained that the costumes were inevitable because the variety show was inspired by the Chinese novel “Journey to the West.” “With each season, the transformations are getting more intense since there’s no going back,” he said. “But they’re all gradually enjoying it.”

PD Na Young Suk continued, “These days, they try to dress up in the way they want. Kang Ho Dong tries not to do plain ones.” He also added that the show’s idol members, Super Junior’s Kyuhyun, Block B’s P.O, and WINNER’s Song Mino, are also ambitious about the transformations.

The PD and writer both chose Kang Ho Dong’s costume as the best costume. PD Na Young Suk explained, “There was never a time when we thought a costume was hilarious. I feel nervous wondering if it’ll be uncomfortable for the cast and viewers. But Kang Ho Dong’s transformation into Shin Myo Han was memorable.”

The PD also brought up the outrageous promise he made to send Eun Ji Won and Lee Soo Geun to the moon if his YouTube channel reached 1 million subscribers. “I decided to talk a lot less,” he said. “I’m going to be careful of what I say, and there won’t be any more pledges. That was my first time doing a live broadcast. I have done TV broadcasts for a while, but I’m a rookie YouTuber. I thought of it simply at first, but the comments said that I couldn’t do all of the things I had thought about. So I thought that I should apologize quickly. I then came up with the idea of an ‘unsubscribing campaign.’ It was the only thing I could come up with.”

Thanks to his “campaign,” the PD succeeded at reducing the number of his subscribers to 999,000 subscribers. He commented, “That was the most thrilling moment in the last three years. I was thinking that I could do anything for these people. 20,000 people unsubscribed while watching the broadcast.”

He concluded, “This is my pledge of no pledges. If I pledge again, then…” and stopped himself before making another promise.