MONSTA X shared thoughts on their latest promotions in the United States, their gratitude for fans, and their hopes for the future.

The group successfully wrapped up their second iHeartRadio’s Jingle Ball tour where they were part of lineups of popular artists and performed for fans in Chicago, Minneapolis, Philadelphia, and New York City.

In an interview with OSEN, MONSTA X began, “The Jingle Ball tour is a year-end concert that’s popular in America. It’s a very valuable performance to experience even once, so we had big expectations about being able to participate two years in a row. But we were really happy when we received the offer to participate again this year. We experienced what it’s like last year, so we were happy that we could stand on that stage again. Most importantly, they asked us again after seeing our previous performance, so it felt as if we were being acknowledged. It was a really fun time.”

The idols continued, “Our first time and second time participating felt a bit different. Looking back, we did a world tour and so it wasn’t our first time performing overseas. But last year during our first performance, we were nervous and had some regrets. But since it’s a stage we’d been on before, we were able to go about it more smoothly and enjoy performing. We felt proud to have improved compared to last year and we were happy that the crowd reacted positively.” 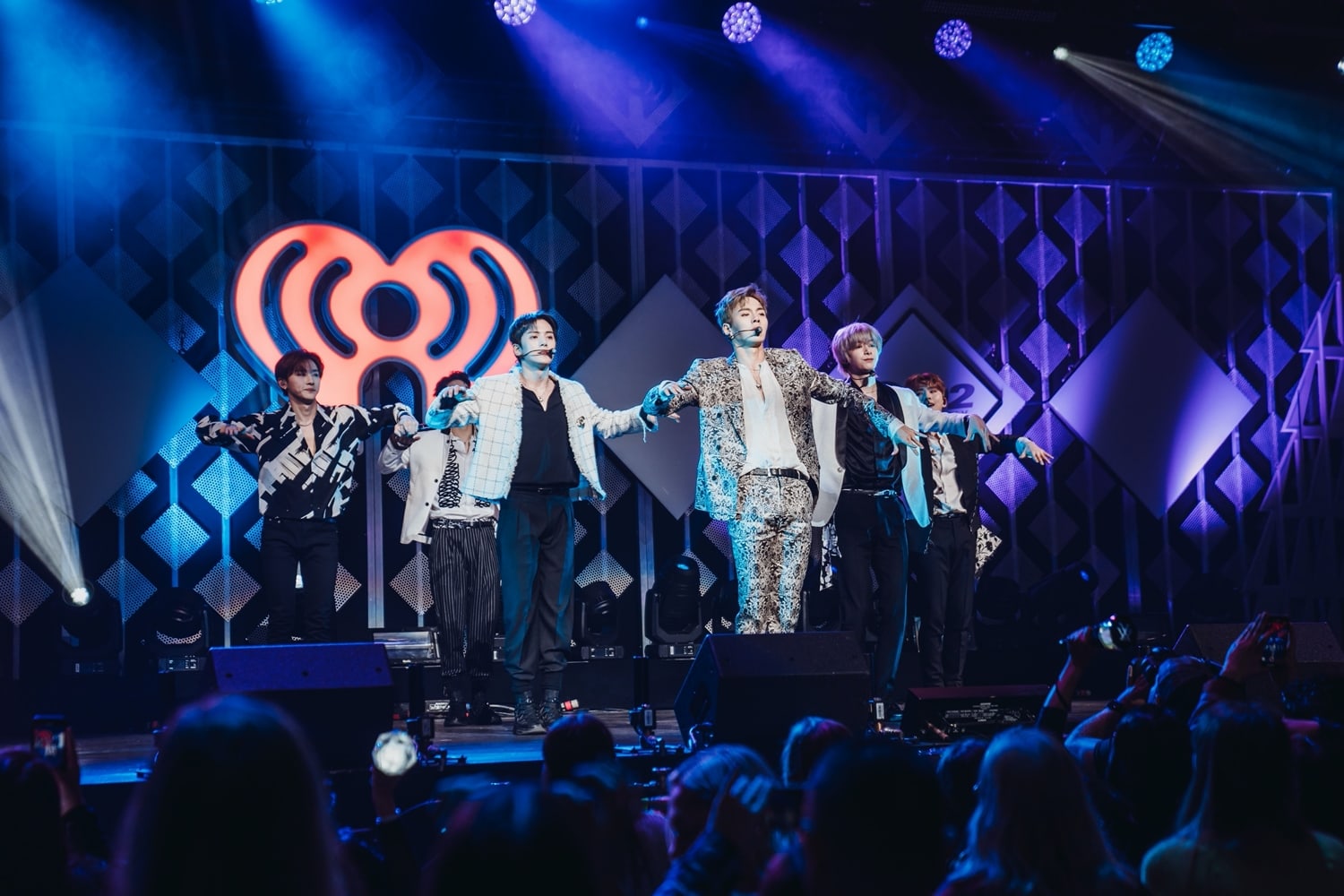 From their first performance in Chicago to their final stop in New York City, MONSTA X’s fans Monbebes welcomed the idols with light sticks and fan chants. When asked to choose the most memorable moments, Joohoney answered, “I remember Monbebe’s fan chants the most. They endlessly chanted along to most of our songs. Monbebes sang our songs in really loud voices inside of the venue, and it was so moving. I, unfortunately, joined the group later on in Philadelphia, but fans kept calling my name so I remember feeling really grateful and gathering more strength while performing.”

“Everything was memorable, but we’d have to choose the concert in New York,” continued MONSTA X. “It was the concert where the largest number of singers participated and there were so many people in the audience so it was an exciting stage where you could feel the energy of the concertgoers. It was also full of year-end and Christmas vibes, so we were even more excited and happy when performing.”

They continued, “Beside the performance, we remember the things that happened with Camilla Cabello. We met for the first time last year at Jingle Ball and took photos. A year later, we reunited as Epic Records labelmates and took another photo.” 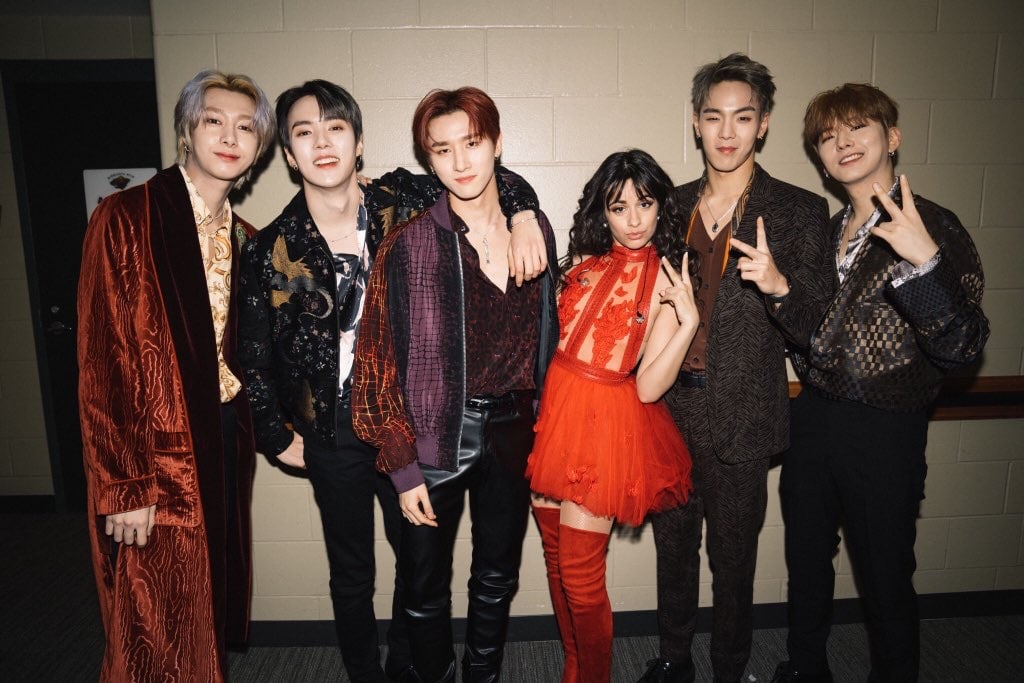 Reflecting on their growth, MONSTA X stated, “The reaction from the audience was different from last year. As you may know, Jingle Ball isn’t MONSTA X’s solo concert but a collaboration stage between really famous and popular artists. So our fans are in the audience along with fans of other artists. But among them, quite a few of the audience members knew us and passionately enjoyed our stage. Seeing this, it made us think that we’d grown and we were proud.”

Speaking about their efforts to improve their performance, MONSTA X explained, “We showed many new things on stage. MONSTA X is known for powerful, fierce performances. But by showing groovy, softer, pop-style performances like for our latest track ‘Middle of the Night,’ we believe that we were able to show various other things. We also showed fun performance-centered songs like ‘Follow’ and could prove that we are a group capable of pulling off various types of music.”

During the Jingle Ball tour, MONSTA X also carried out other U.S. promotions. They were invited to perform at the Chanel N°5 party in New York City and performed on ABC’s morning show “Live with Kelly and Ryan.” 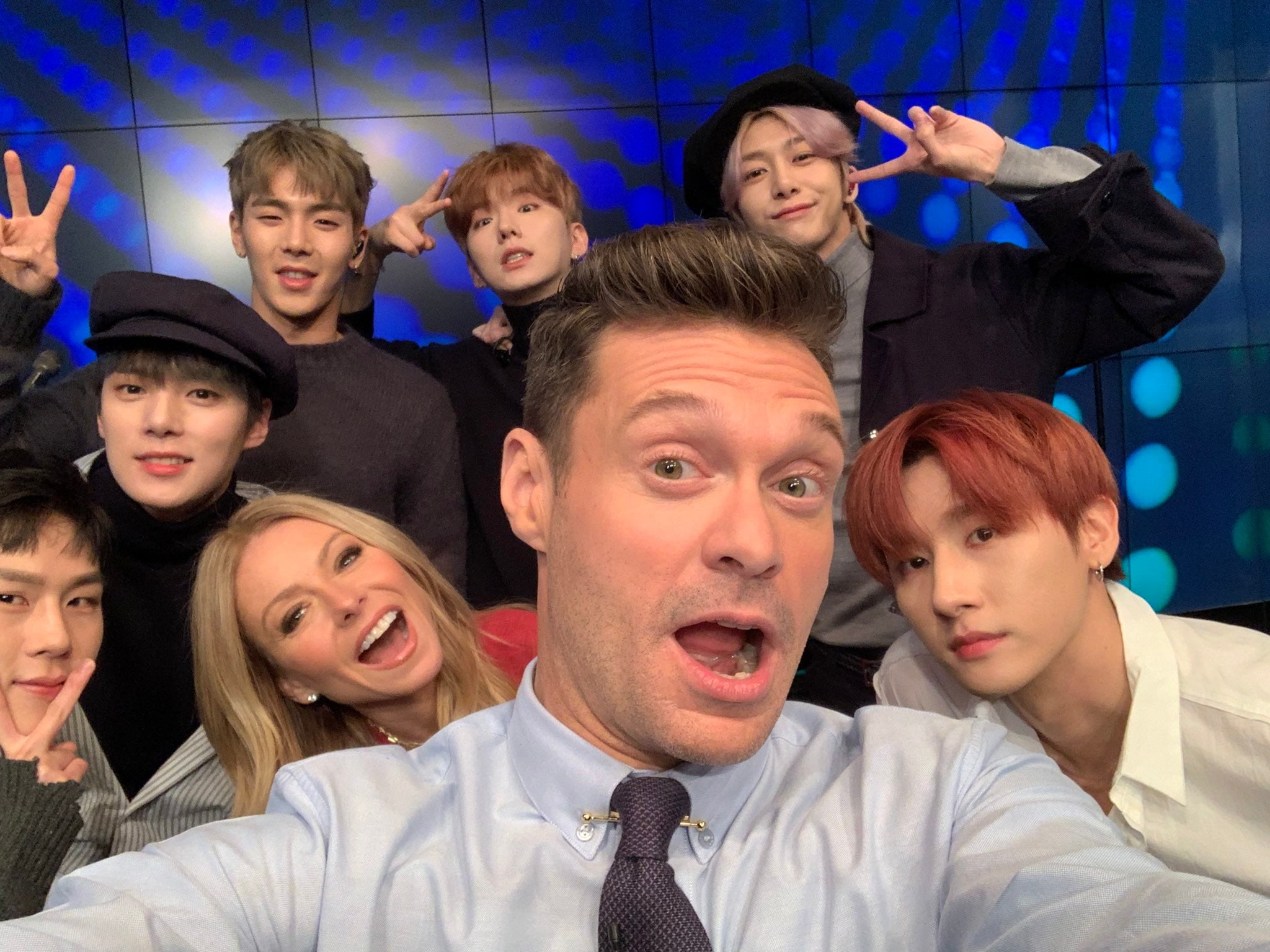 “As for the [Chanel] collection party, we were nervous because it’s the collection of a world-famous brand,” they said. “It was really nice to see model Soo Joo there. She’s a global model who represents Korea. It was fascinating to see her somewhere like New York and not Korea, and she was really cool like the top model that she is.”

MONSTA X continued, “It was really cool meeting actor Jack Black who was a guest on the same day on the ABC talk show. He’s a famous Hollywood actor who appeared in our favorite films, and he came to our dressing room to take selfies and videos. We were surprised by his fun, easygoing personality and we became fans.” 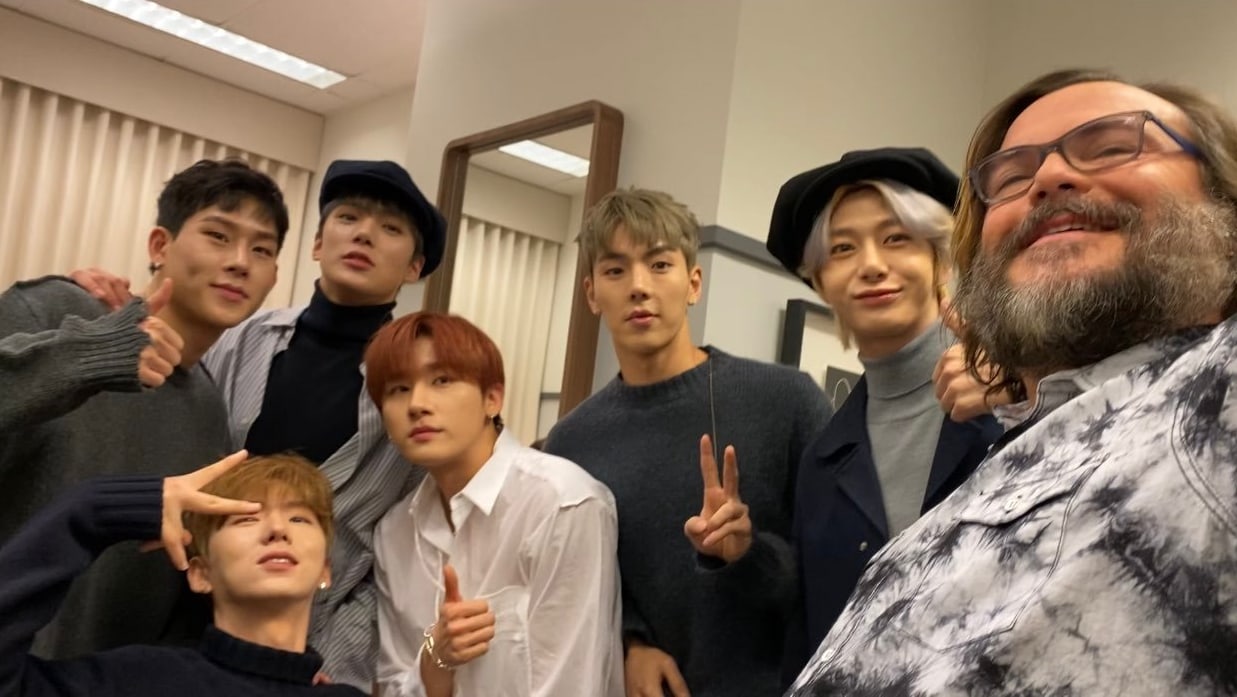 Earlier this month, MONSTA X released their latest single “Middle of the Night” and gave fans a preview of their upcoming English album. “Since there are two months left, it’s difficult to give detailed spoilers,” said the group. “But the album title is ‘All About Luv‘ and since it’s being released on Valentine’s Day, it’ll contain many songs about love. Each song captures various aspects of love and we think that many people will be able to relate to it. Since all of the songs are in English, you’ll be able to experience our various charms in a new musical way.”

The idols also upped excitement about their upcoming events. They stated, “First, we’re going to be busy with year-end and beginning of the year award shows. We received good reactions from viewers and fans for our various award show performances thus far. Our water performance at one of the previous award shows gained us a lot of attention. This year, we’re brainstorming to come up with a more upgraded, spectacular performance than that one. Please look forward to it.”

They continued, “In 2020, we have a fan meeting with Monbebe so we’ll be busy preparing for that fan meeting. In order for it to be a fan meeting filled with good performances and fun memories, we have a lot of things to prepare. It’ll be our first time in a while spending time with fans after the April concert in Korea, so we think it’s going to be really happy and joyful.”

MONSTA X concluded the interview by expressing gratitude for their fans. “This year, we met many Monbebes all around the world,” said the group. “We hope that there will be opportunities for us to share happiness with even more Monbebes around the world next year. We also really wanted to say thank you for always supporting and loving MONSTA X. Because of all of you and every time we receive your overwhelming love, it warmly comforts us and gives us the strength to work hard and move forward. We always cherish your love deep within our hearts and thank you. We’ll become MONSTA X who always gives happiness to our Monbebe through good music and performances. Thank you.” 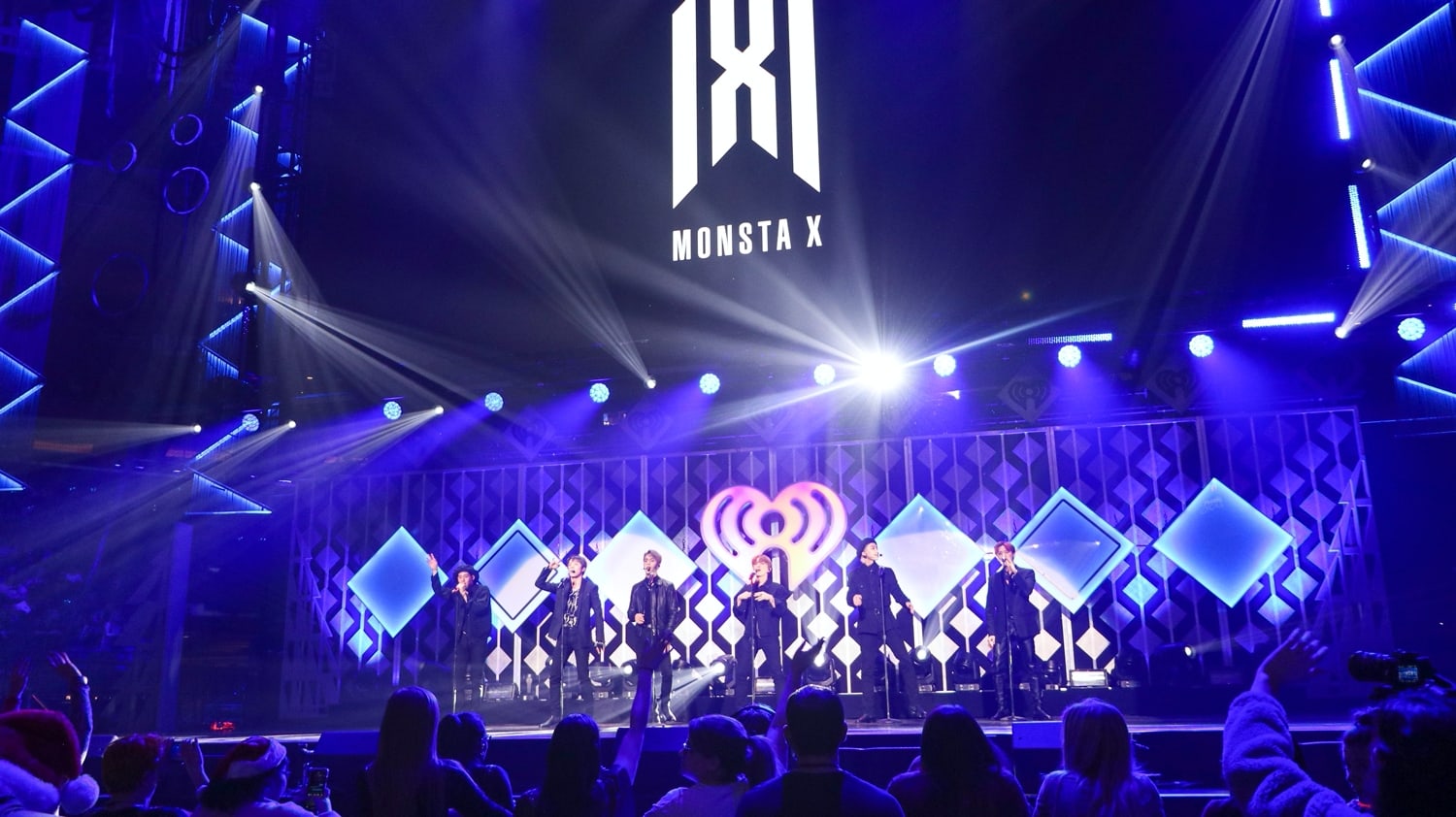