On December 19, a press conference was held for Yoo San Seul’s goodbye concert for his first album. Yoo Jae Suk has chronicled his debut as a trot singer on the variety show “How Do You Play?” which is led by producing director (PD) Kim Tae Ho.

This latest event was a hidden camera prank and Yoo Jae Suk only found out about it when he arrived at the venue.

“This isn’t the first time something like this has happened,” began Yoo Jae Suk. “I learned about the goodbye concert in a similar way.” Looking at producing director Kim Tae Ho who orchestrated this situation, Yoo Jae Suk said, “PD Kim Tae Ho should also go through this.”

Getting into character and promoting his concert, Yoo Jae Suk said, “A solo concert is something I couldn’t even, hadn’t even, dreamt about. I feel very sorry about holding a solo concert with two songs.” 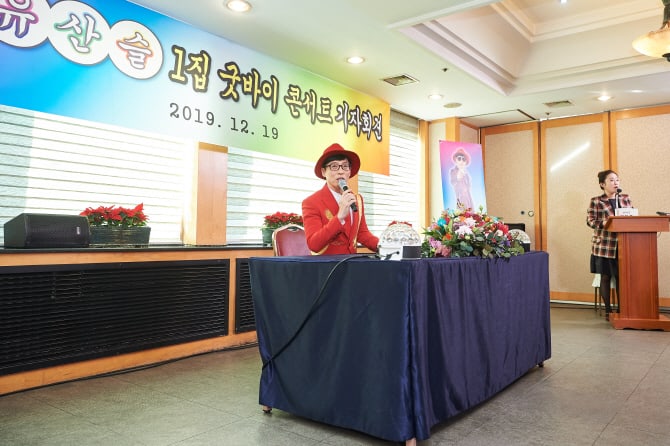 Along with the EBS trainee penguin character Pengsoo, Yoo San Seul has also become a rising star of 2019. In response to whether he feels a sense of rivalry with the beloved character, Yoo Jae Suk replied, “I’m not at the level of Pengsoo’s popularity. Pengsoo is a character that I also like.”

About his surprisingly elaborate promotions for a rookie singer (from a press conference to a solo concert), Yoo Jae Suk said, “Yoo San Seul is a rookie who receives special treatment, so I feel sorry about that. But through the show, I hope it becomes known what a fun genre trot is. I hope it’ll become a genre loved by more people and that its popularity continues and doesn’t end here.”

Speaking about his singing skills, he said, “I feel that I’ve improved compared to the beginning. I came here after practicing not too long ago. But I’m greatly lacking compared to singers and feel sorry even while I’m singing. If I was to score my singing, I’d give it about 78 points.”

He then said, “I feel confused as well” about promoting as both Yoo Jae Suk and Yoo San Seul. He explained, “The autograph is confusing too. I signed as Yoo Jae Suk, and they asked me to sign as Yoo San Seul. It made me wonder, ‘Do I need to make up an autograph for Yoo San Seul?'”

“It’ll be an honor if I could sing a duet with Song Ga In,” concluded Yoo Jae Suk. “I hope many people will enjoy and gain strength from the character Yoo San Seul. I hope I can give you energy even just for a moment in your monotonous everyday life.” 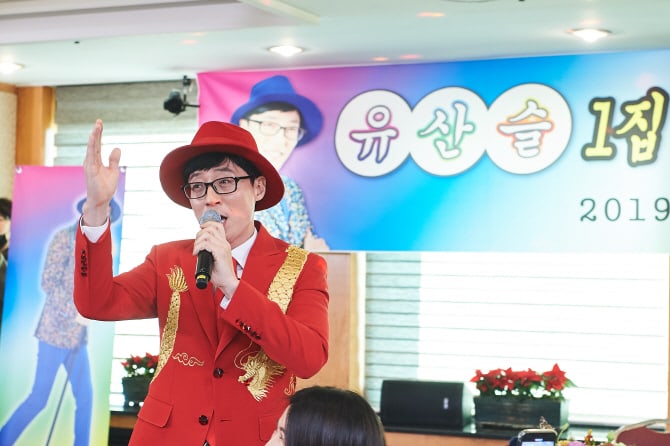