Tickets for GOT7’s stadium concert in Bangkok are sold out!

Starting with their Seoul concert in June, GOT7 kicked off their 2019 world tour “KEEP SPINNING.” In September, GOT7 announced additional concert dates for 2020, which included venues in Bangkok, Singapore, Macau, Kuala Lumpur, and Taipei.

On December 21, tickets for the February 15, 2020 concert in Bangkok sold out within two hours. The server experienced loading issues due to a large influx of users trying to access the site at once. Fans also lined up at the ticket window to purchase the tickets in person even the day before tickets were available for sale.

In response to popular demand, JYP Entertainment announced an additional concert date for February 16, 2020. GOT7 will thus be performing at the Rajamangala National Stadium in Bangkok for two days on February 15 and 16. 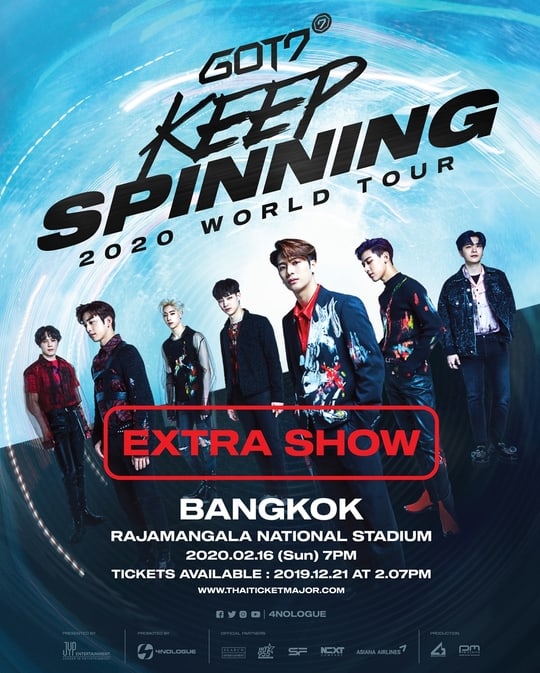 Rajamangala National Stadium is the largest stadium in Thailand with a seating capacity of 49,722, and GOT7 will be the second K-pop group to perform two shows at the venue. The concert will be even more meaningful as it will be GOT7’s first solo concert of a stadium scale since their debut. Meanwhile, in 2017, GOT7 became the first K-pop group to tour five cities in Thailand. Earlier this year, GOT7 also held their fan meeting “GOT7 FAN FEST 2019 ‘SEVEN SECRETS’ IN BANGKOK” for four consecutive days with a total of seven shows.