Kim Gura came to Park Na Rae’s defense after she came under fire for her response to his remarks during the 2019 SBS Entertainment Awards.

During the 2019 SBS Entertainment Awards on December 28, host Kim Sung Joo interviewed the nominees for this year’s Daesang (Grand Prize). Kim Gura was one of eight nominees, and he made headlines for his brutally honest statement about the current state of award shows and the need for change. Kim Sung Joo was taken aback by Kim Gura’s answers and laughed in response before asking his co-hosts, Park Na Rae, and Jo Jung Shik, for help. Park Na Rae was not shown onscreen, but could be heard saying, “Kim Gura, please calm down,” followed by an audible sigh.

Shortly afterwards, “Park Na Rae sigh” became a trending realtime search on Korean portal sites, and some people criticized the comedienne for being disrespectful towards a senior in the industry. Others pointed out that Park Na Rae sighs frequently in her variety shows and that it was not necessarily a sign of disrespect.

On December 29, Kim Gura attended the 2019 MBC Entertainment Awards, where he spoke about his comments from the night before.

“I became a star overnight,” said the comedian. “My son called me last night asking me what happened. I felt apologetic because I was on the list of trending searches, when it was Yoo Jae Suk who had received the Daesang. Thank you for being entertained by my thoughts and exaggerated performance.”

He went on to joke, “Lots of PDs [producing directors] contacted me afterwards. One of them said that they would try to get rid [of award shows] if they become the director, but that person is not exactly director material.”

Kim Gura continued, “I’ve participated in these kinds of events 12 consecutive times since 2017. I said that entertainment award ceremonies were in danger no matter who won, but MBC isn’t in danger. MBC puts the focus on people, so you can count on its viewership ratings.”

Kim Gura then chose Park Na Rae and Yoo Jae Suk as the top contenders for this year’s Daesang, before predicting that Park Na Rae would take home the award. “Since Yoo Jae Suk received [the Daesang] yesterday [at the SBS Entertainment Awards], I think there will be a change this time around,” he said.

Addressing the controversy surrounding Park Na Rae’s sigh, Kim Gura remarked, “I heard that Kim Sung Joo and Park Na Rae received criticism during my exaggerated performance. I think of their reactions as variety-style reactions [intended to be comic and entertaining], so please don’t misunderstand them.” 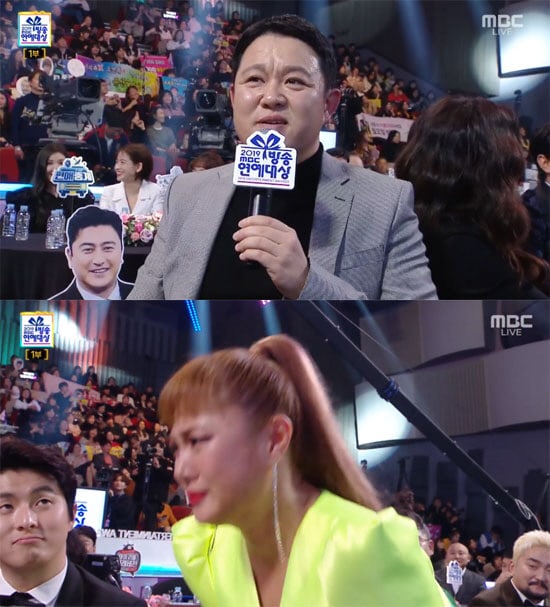 The 2019 MBC Entertainment Awards will soon be available on Viki.

In the meantime, you can watch the 2019 SBS Entertainment Awards below: