On January 4, day one of the 34th Golden Disc Awards took place at the Gocheok Sky Dome in Seoul. The first part of the two-day ceremony focused on recognizing achievements in digital music releases, and the night’s biggest award was the Grand Prize.

After winning a Bonsang for their success in digital music in 2019, BTS was announced as the winner of the night’s Grand Prize. Big Hit Entertainment founder and producer Bang Shi Hyuk accepted the award on BTS’s behalf.

“First, I’d like to sincerely congratulate BTS on becoming the stars of the Digital Song Grand Prize,” Bang Shi Hyuk commented. “Last week, I attended Park Jin Young’s concert. When I went there, I became deeply moved as I reminisced about the mood, and even the smell of the studio we worked in together 20 years ago. Now that I think about BTS, it’s already been seven years since their debut. The success they’ve achieved until now is unbelievably amazing, and I’m positive that they’ll achieve even greater things in the future as well, but I think that in 13 years, they’ll still be able to laugh with me as we talk about music. I hope they’ll continue to be singers who love music, and I pray that BTS will be able to continue making music happily.”

He continued, “I will now read this letter written by the members for the fans: ‘To ARMY all over the world who love our music, thank you very much. We’ll continue to be with you through our music in 2020, and in the future as well. As long as ARMY is there to listen to our music, BTS is happy, and BTS will be happy.” 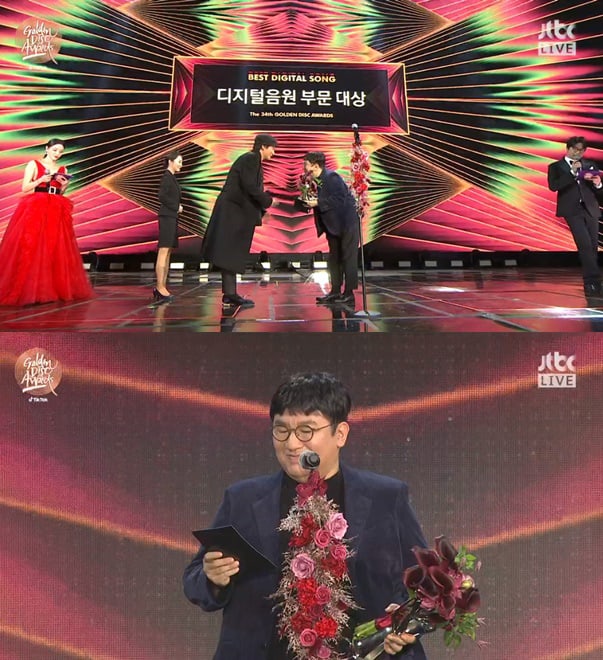 Jimin later took to Twitter to write, “Although we couldn’t attend [the ceremony] today, we won the Grand Prize in the Digital Song category at the Golden Disc Awards. We’re always thankful towards ARMY who listen to our music and support us. We will become a [group] that works even harder from now on. We’re always thankful, and we love you.” He also added the hashtags, “#OurARMYWonAnAward” and “BangPDThankYouILoveYou.”

Congratulations to BTS! The second night of the 34th Golden Disc Awards will be held on January 5 to recognize achievements in physical music releases in the past year.