Park Hae Jin plays Kang San Hyuk, an elite specialist at an investment firm who will do whatever it takes to achieve his life goal of obtaining 1 trillion won (approximately $863 million) in personal assets. Noh Kwang Sik play Choi Chang who grew up without any financial concerns thanks to his father but went against his father’s wishes in order to follow his dream of being an emergency rescue team member. The two will showcase interesting chemistry in which they always compete to see who’s better off whenever they meet.

In the newly released stills, Kang San Hyuk and Choi Chang are glaring daggers at each other in their first encounter at Miryung forest. In order to capture a wider view of Miryung forest with his camera, Kang San Hyuk steps on a dead tree, but Choi Chang suddenly appears and blocks his view. The two use all their might in order to claim a more elevated position than the other, facing off in a fierce battle of pride. 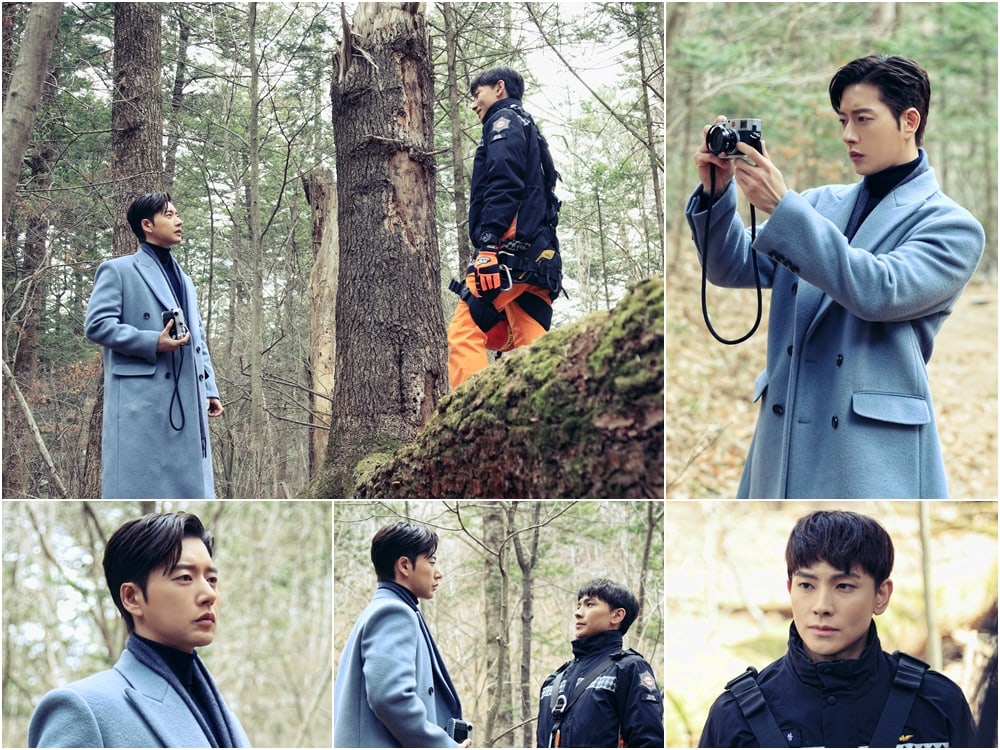 The filming for the particular scene took place in Pyeongchang county of Gangwon province, and the two actors used witty adlibs to brighten up the atmosphere on set and to liven up their characters’ chemistry. They immersed themselves into their roles once filming began, and as soon as Park Hae Jin and Noh Kwang Sik wrapped up the scene, the set exploded with laughter at their characters’ hilarious chemistry.

The production team shared, “Park Hae Jin and No Kwang Sik’s tsundere (cold on the outside, warm on the inside) chemistry will be one of the interesting points to look out for. Please show lots of interest for ‘Forest,’ which premieres in seven days, to find out who grasped victory between the two in their first encounter.”

KBS 2TV’s upcoming Wednesday-Thursday drama “Forest” will premiere on January 29 at 10 p.m. KST as the follow-up to “Woman of 9.9 Billion.” Watch a teaser for the drama here!

In the meantime, watch the latest episode of “Woman of 9.9 Billion” below!