The romance is heating up in tvN’s “Crash Landing on You”!

Below are three of the most memorable romantic scenes from the drama!

Yoon Se Ri was headed towards the airport in order to return to South Korea when a mysterious truck convoy suddenly conducted a siege. Ri Jung Hyuk, who was secretly protecting Yoon Se Ri from behind, suddenly appeared to rescue her. To the viewers’ dismay and shock, Ri Jung Hyuk was injured in his shoulder during the shoot-out. Not only did the scene in which Ri Jung Hyuk appeared riding his motorcycle captivate viewers, but the romance between Ri Jung Hyuk, who’s willing to risk his life for his love, and Yoon Se Ri, who’s unable to leave for South Korea with Ri Jung Hyuk in critical condition, is keeping viewers on their toes.

A match made by fate

Ri Jung Hyuk also stunned viewers with the scene in which he’s playing the piano by the lake shore in Switzerland. A few years in ago, Yoon Se Ri, who was going through an extremely difficult period in her life, left to travel Switzerland alone and coincidentally came across piano music that lifted her spirits. Ever since then, she’s kept that melody deep within her heart. When Yoon Se Ri heard Ri Jung Hyuk play the piano, she was shocked to discover that the two had been connected by that fateful moment in the past, and a beautiful scene plays out in which they’re back at the same lake, meeting each other’s gazes. 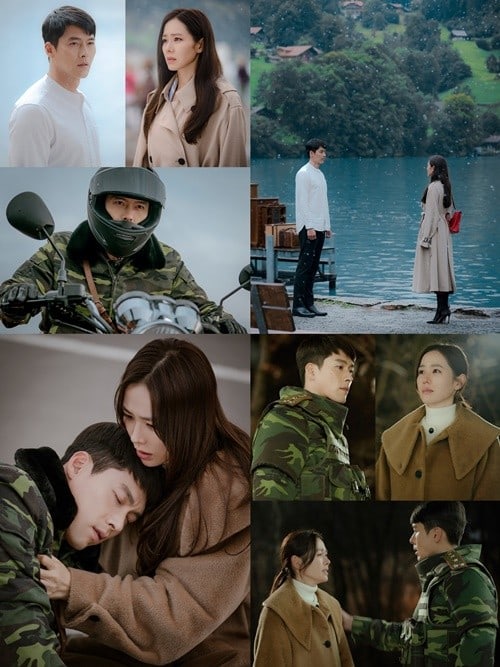 Although Ri Jung Hyuk and Yoon Se Ri love each other, they know they must part. Yoon Se Ri was set to return to South Korea through the demilitarized zone, but Ri Jung Hyuk wanted to stay by her side as long as possible before parting. With the military demarcation line in front of him, Ri Jung Hyuk said, “I can’t step one foot past here.” However, when Yoon Se Ri walked away crying, Ri Jung Hyuk suddenly grabbed her from behind, saying, “One step should be okay,” and the two shared a beautiful farewell kiss.

The upcoming January 25 broadcast of “Crash Landing on You” will not air a new episode and will instead broadcast a special episode including behind-the-scenes content due to the Lunar New Year.