Block B’s Zico has earned a triple crown on the Gaon charts for the second consecutive week!

After sweeping all three of last week’s digital charts with his latest hit “Any Song,” Zico managed to repeat the feat this week. The song held onto its spot at No. 1 on the overall digital chart, the digital download chart, and the streaming chart for the week of January 19 to 25.

Congratulations to Zico on another amazing achievement!

JYJ’s Kim Jaejoong’s “Ayo” maintained its position at No. 1 for the second week on the physical album chart, while Baek Yerin’s “Every letter I sent you” rose to No. 2. Shinhwa’s Kim Dong Wan’s “…LER” debuted at No. 3, followed by Red Velvet’s “The ReVe Festival: Finale” at No. 4 and BTS’s “Map of the Soul: Persona” at No. 5. 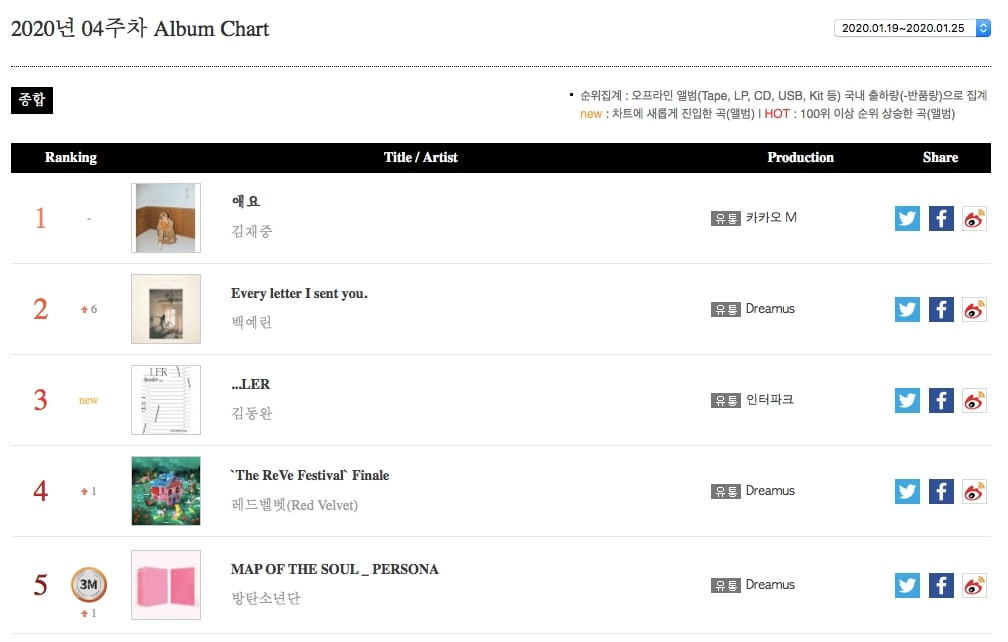 The top five songs on the overall digital chart and the streaming chart were exactly the same this week: Zico’s “Any Song” topped both charts, with Changmo’s “METEOR” and Red Velvet’s “Psycho” also holding onto their spots at No. 2 and No. 3 respectively. IU’s “Blueming” took No. 4 for the week on both charts, with Baek Yerin’s “Here I Am Again” (from the OST of “Crash Landing on You”) at No. 5. 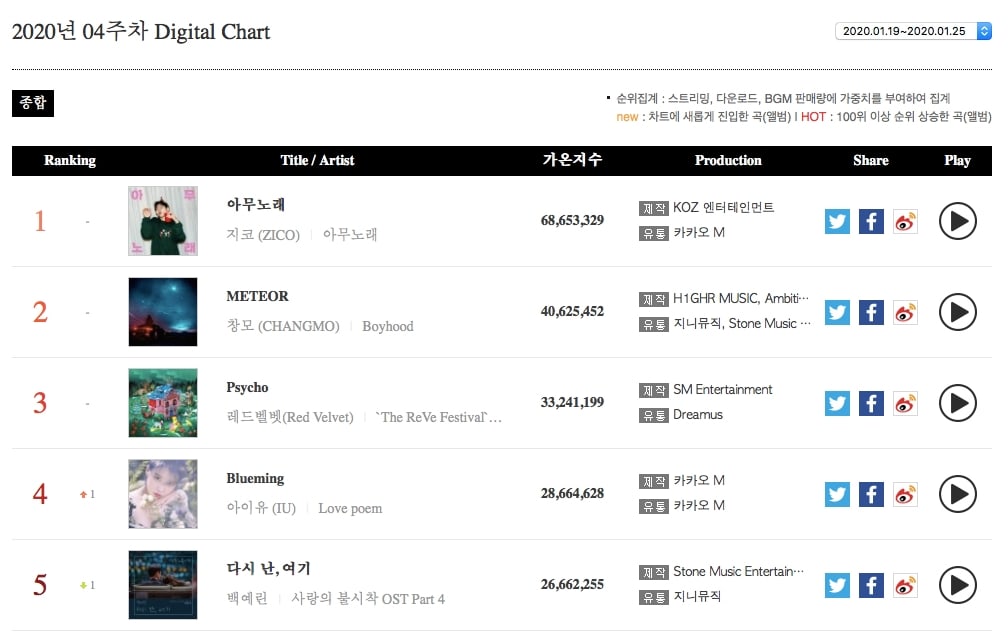 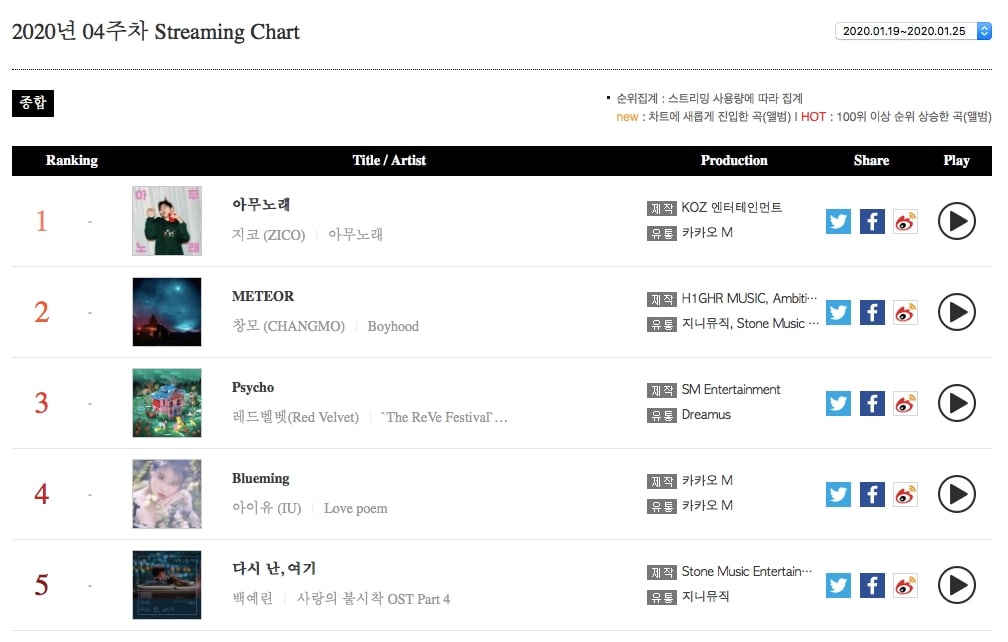 Zico’s “Any Song” remained No. 1 on this week’s digital download chart, while Kim Jae Hwan’s “One Day” (from the OST of “Crash Landing on You”) debuted at No. 2. Paul Kim and Chungha’s new collaboration “Loveship” entered the chart at No. 3, and BTS’s “Black Swan” and Baek Yerin’s “Here I Am Again” rounded out the top five at No. 4 and No. 5 respectively. 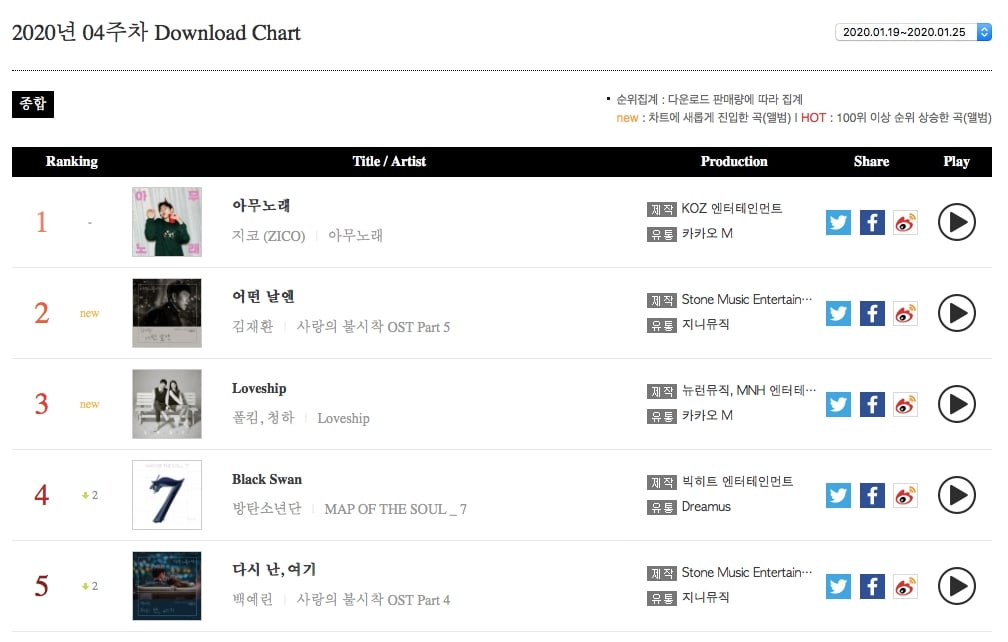 BTS held onto its spot at the top of Gaon’s “Social Chart 2.0” for yet another week, followed by trot singer Song Ga In at No. 2 and Kim Jae Hwan at No. 3. Impressively, SF9’s Rowoon came in at No. 4 for the week, while his group charted separately at No. 5. 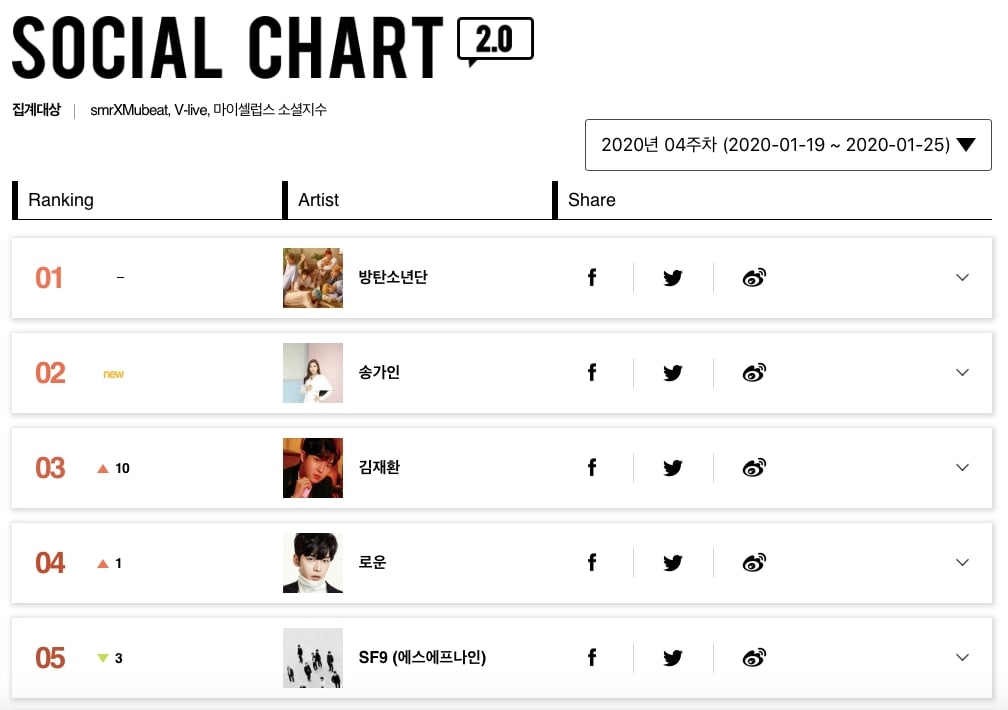