One of the reasons why “Dr. Romantic 2” appeals to the viewers is because of its realistic and relatable details.

The drama recently surpassed the impressive 20 percent mark in viewership ratings and has consistently ranked as the most-viewed drama in its time slot across all public and cable channels.

“Dr. Romantic 2” focuses on the development of a story in which a large number of trauma patients are transported to the emergency room of Dol Dam Hospital. In particular, all surgical cases, including emergency medicine, surgery, cardio, and orthopedic surgery, are being carried out as they contain cases of serious trauma patients who were not covered in any medical drama, such as gunshot wounds, stab wounds, multiple fractures, or traffic accident damage that cannot be treated in a general emergency room.

Here are some real-life medical cases that add reality to the series:

Coma due to external shock

In one episode, a paramedic fell into a coma after suffering an external shock. She received several bows to the head while rescuing a drunk on the street. The brain CAT scan revealed that the head impact and causality were completely unrelated, but she was determined to be brain dead without spontaneous breathing and brain stem reflections. This scene was created using the motif of a real paramedic who died of a cerebral hemorrhage after being assaulted by a drunk.

In the same episode as the paramedic who fell into a coma, there was the case of a patient in his twenties who ended up as a lifer in prison after committing two murders. The young inmate suffered from end-stage renal disease and had to receive dialysis. A hemodialysis catheter was inserted in the neck for dialysis, but the inflammation from tattoos all over his body became more severe, reaching the point where the device could not be inserted. The patient, who was found to be unable to receive blood dialysis for more than three days, ended up living a new life when he received a kidney from the paramedic.

One detective appeared at Dol Dam with a gunshot wound to the liver. The bullet was still embedded in his body, and he even experienced a cardiac arrest. Since the gunshot patient suffered great damage to his liver, the surgery was completed through a segmentectomy once the bullet was removed. 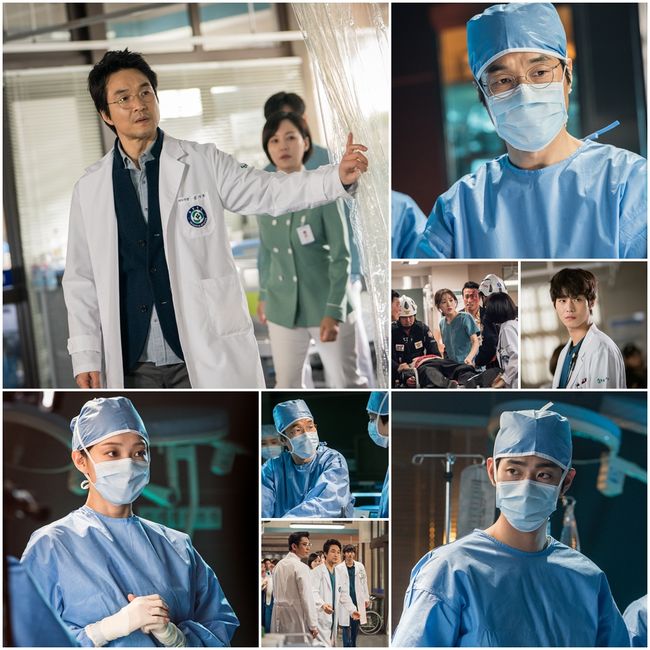 A gang leader who was stabbed in the chest was brought to the emergency room with a condition called cardiac tamponade, where blood, fluid and air are tight between the long and outer walls surrounding the heart. Kim Sa Bu (Han Suk Kyu) had to operate on another patient, so he ordered Cha Eun Jae (Lee Sung Kyung) to perform pericardiocentesis by using a needle and catheter to remove fluid from the sac around his heart.

In another episode, one man inhaled drugs and attempted to commit family suicide. After jumping from the fifth story, he complained of a severe stomachache. In the hybrid room, the patient was diagnosed with pulseless electrical activity and had to undergo surgery for bowel perfusion and hemoperitoneum. Seo Woo Jin (Ahn Hyo Seop) stopped the bleeding vessels until Kim Sa Bu arrived, and Kim Sa Bu, who studied the intestines and found the damaged area, asked Seo Woo Jin to finish up the operation by removing the damaged part and giving him an end-to-end anastomosis.

Production crew Samhwa Networks said, “In ‘Dr. Romantic 2,’ a variety of trauma patients are appearing in the emergency room at Dol Dam Hospital. We wanted to convey the meaning and importance of trauma to viewers through various cases. Please look forward to seeing what other trauma patients will bring to the emergency room of the Dol Dam Hospital.”

Dr. Romantic 2
How does this article make you feel?