Jung Chaeyeon and Nayoung recently met up for a little reunion!

On February 8, DIA’s Jung Chaeyeon posted a photo of the two of them posing like models for a photo shoot. Nayoung replied to the photo with the comment, “Oh yeah [emojis].”

Joining in the mini I.O.I reunion was gugudan’s Mina, who commented on the post, “This is crazy.” 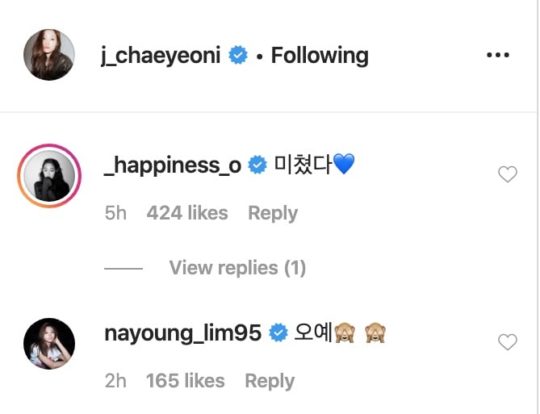 After PRISTIN disbanded, Nayoung signed with Sublime Artist Agency and has communicated to fans about her future solo career and acting prospects. Jung Chaeyeon continues to promote with DIA, who most recently made a comeback in March 2019, on top of her own acting career, most recently appearing in the Netflix drama “My First First Love.”