PENTAGON Shares 1st Place Promises For Comeback, Updates On Yan An, And More

PENTAGON is back with a new look and album!

On February 12, PENTAGON released their first studio album “Universe: The Black Hall” and held a showcase at the Yes24 Live Hall in Seoul. The title of the album signifies the vast, mysterious universe that unfolds in front of PENTAGON after meeting each other by fate.

Hui began, “It’s been three years and four months since our debut. Since then, we’ve released nine mini albums and this is our first time releasing a studio album. I can describe this album as a compressed collection of our previous mini albums. We have songs of various genres and emotions, so I hope many people will enjoy it.”

About the long time it took the group to release a full album, Jinho said, “During the three years and four months, we released many mini albums in Korea. When we first debuted, we didn’t start with self-composed songs and think that we found our musical colors through the nine mini albums. So we confidently released a studio album this time. It might feel belated, but we wanted to release it when we felt confident.”

Kino added, “PENTAGON and the universe cannot be separated. As expected, we conveyed the universe in our album. We created it with only good things after compiling the ideas of our experts, agency employees, and the members.” 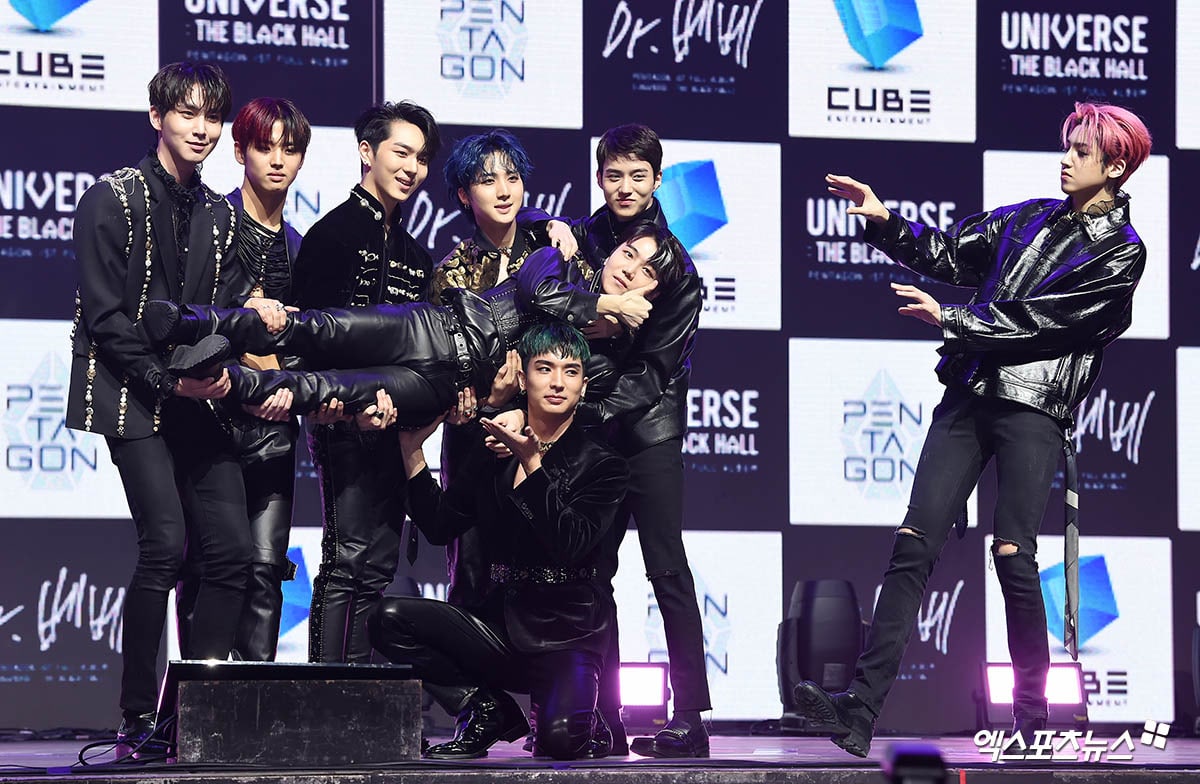 “The overall arc of this album is the universe,” explained Hui. “It means that the eight members of PENTAGON met in the universe and began creating a separate world together. We paid attention to the details and the things we wanted to express according to the title.”

PENTAGON’s latest title track is “Dr. BeBe,” which is an electronic track with a hip hop rhythm. Hui participated in writing the song and lyrics. Centered around the four themes of “Love, Fall, Hurt, and Crazy,” the song talks about the repetitive cycle of falling in love, hurting, going crazy, and falling in love again, and the one “BeBe” that can heal one from this cycle. 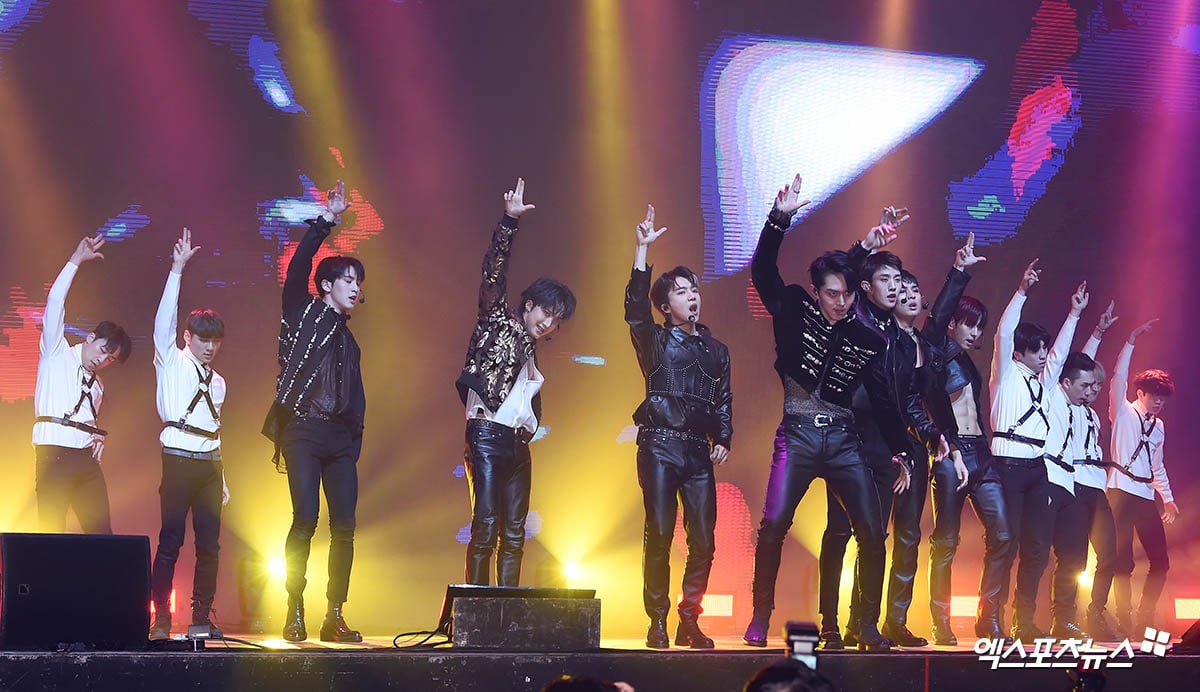 Sharing the story behind the group’s title track, Hui said, “Our title track is chosen through many processes, and it kept falling short. ‘Dr. BeBe’ is the song I wrote the latest and completed within a day. The agency employees also really liked it.”

“There was a member who gave a standing ovation after listening to it for the first time, and there was also a member who said, ‘You worked hard,'” said Shinwon.

Earlier this month, Cube Entertainment announced that Yan An would not be participating in this comeback due to ongoing health issues after their initial notice in July 2019 that Yan An would be sitting out on promotions to focus on his recovery.

Giving an update on his fellow member, Hui stated, “I’m constantly in contact with Yan An and he’s doing well. He contacted the members yesterday as well and cheered us on. We were able to work harder to prepare because of his support.” 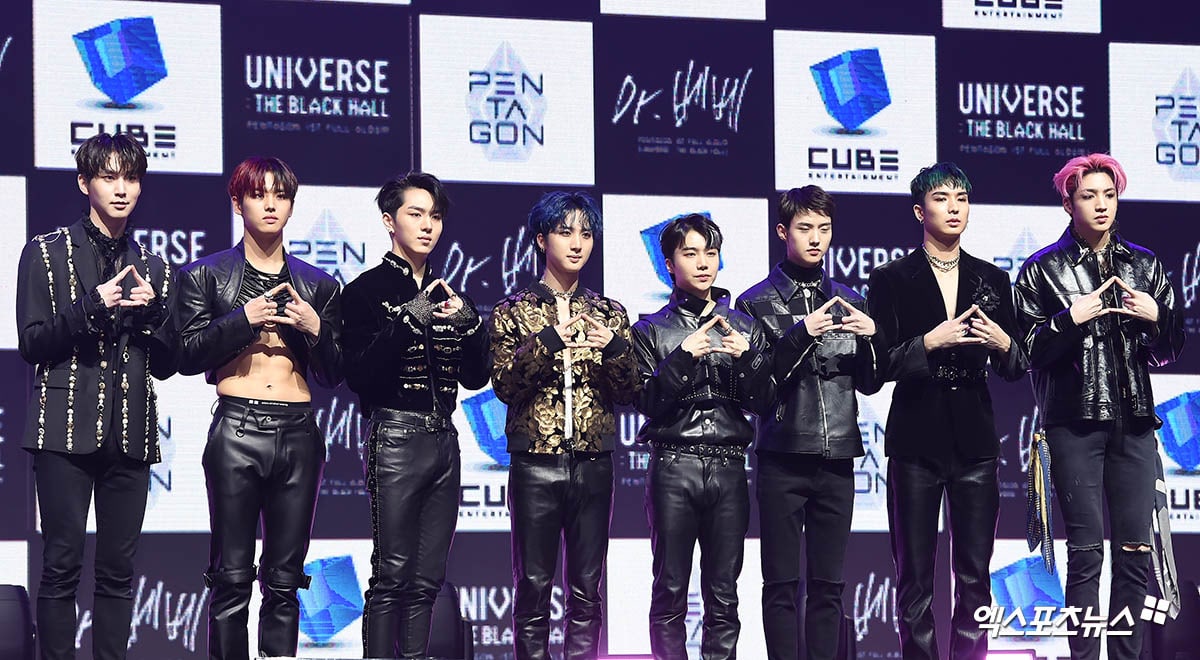 PENTAGON made various first win promises. Kino said, “If we get No. 1 on a music show, I’ll build up abs and dance while wearing a crop top.” Shinwon added, “I’ll go through the members’ hard drives and release an unreleased track.” Yeo One revealed, “If we enter the chart within the top 50 ranks, we’ll show you new charms while wearing animal pajamas or new outfits.”

PENTAGON
XPN
How does this article make you feel?