The identity of Mojito was revealed on MBC’s “The King of Mask Singer!”

On the February 16 episode, four semi-finalists competed for the chance to battle it out against the four-time winner and reigning king, Sonorous 18.

Mojito, who had previously beaten out actor Kim Hyung Mook and former volleyball coach Kim Se Jin to advance to the second round, faced off against Brachiosaurus. Mojito sang Lee Ki Chan’s “Beautiful Women” and immersed the audience into her performance with her husky voice. Brachiosaurus sung 2NE1’s “Come Back Home” and impressed with her high range and soulful tone.

In the interview portion, Mojito also charmed the audience with her animal sound impersonations. In the end, Brachiosaurus advanced to the next round with 74 votes and Mojito took off her mask to reveal herself as CLC’s main vocalist Seunghee! 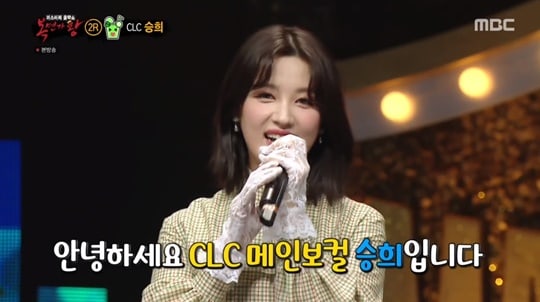 Seunghee is the second CLC member to appear on “The King of Mask Singer” after Yujin last year. Seunghee explained why she’d sung songs by male vocalists throughout her run on “The King of Mask Singer” and said, “My older brother is nine years older than me. He listens to a lot old songs by male singers, so now I enjoy singing those songs too. I wanted to reinterpret those songs with the feelings of a woman.”

She added, “I hope that this year will be an improvement on last year [for CLC]. I will work hard this year to sing and be happy.”

On social media, Seunghee wrote, “Thank you for waiting despite your curiosity (but honestly, you all knew anyway). ‘The King of Mask Singer’ was as fun as I expected! Mojito was me, Seunghee. Bonus shot from on my way home.”

Watch “The King of Mask Singer” below:

CLC
Seunghee (CLC)
The King of Mask Singer
How does this article make you feel?