On February 19, Naver’s operations team posted on its official blog to say, “Despite many different attempts to protect two-sided conversations, one of the internet’s fundamental valuable aspects, we became increasingly concerned when we considered the unique case of celebrities, who are the subject of a large amount of attention.”

Naver stated that they are working on technological solutions and operational policies to solve the problem. In the interim, they are putting celebrities’ wellbeing first and they stated that the efforts they’ve taken up to now using technology to try to solve the problem haven’t been enough to shield celebrities from the pain they undergo due to these violations of their rights. “We’ve decided to close down comments on entertainment news articles until structural changes to the entertainment news service are completed,” they stated.

In addition to comments, the related search term service has also been an issue. When people type a name into the search bar, related terms automatically come up as suggestions. Naver stated, “There have been cases where unconfirmed rumors or keywords that violate personal rights have come up. In order to respect their personal rights and minimize harm to their personal lives, we are abolishing the related search terms feature completely.” The only aspect that will remain is the auto-completion feature for the convenience of the user.

Last October, portal site Daum decided to remove its comment feature for entertainment news articles and pages. In addition, both Daum and the messaging app Kakao Talk removed related searches for people, and Daum is also removing the display of realtime trending searches on its site.

Naver will be suspending its entertainment news article comments and related search terms for names starting in mid-March.

Girls’ Generation’s Sooyoung shared a screenshot on Instagram of an article about the changes, which describes Naver’s decision to close down comments and Daum’s removal of the display of realtime trending searches this month. The article states that Daum removed its comment feature on entertainment news articles as well as related search terms last October after malicious comments became seen once again as a societal problem following the passing of Sulli.

Sooyoung wrote, “A child who lived like a spectacular wave became a sea wall.” 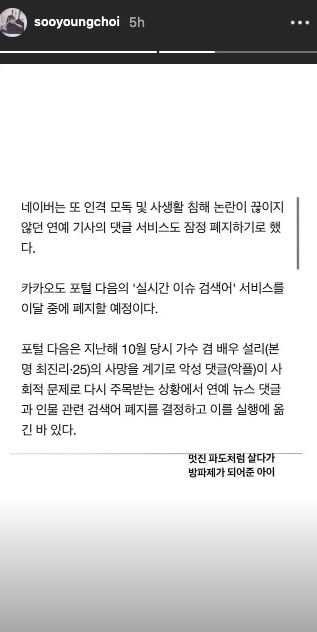 Girls' Generation
Naver
Sooyoung
How does this article make you feel?