Lee Kwang Soo is back on “Running Man”!

On the March 22 episode, the cast participated in a race along with Lee Kwang Soo who returned after recovering from a fractured ankle following a car accident. Lee Kwang Soo began, “I wanted to come to the set so badly. Thank you for worrying about me and waiting for me.”

Kang Daniel, actresses Lee Il Hwa, Hwang Young Hee, and comedienne Park Mi Sun joined the cast in this race where they had to hit their opponent’s back with a slipper and the person whose nametag was hit then got more rice cake in their basket. Lee Kwang Soo, Kang Daniel, Jun So Min, and Hwang Young Hee competed in the race as one family. Instead of running, Lee Kwang Soo participated by cutting rice cake.

Yoo Jae Suk was shocked after seeing the amount of cut rice cakes in his basket. Despite all of this, Lee Kwang Soo’s team was still a strong contender for last place. Ji Suk Jin then told Lee Kwang Soo, “I have Jun So Min‘s name tag so betray her if you don’t want to be in last place.”

As soon as he heard this, Lee Kwang Soo worked harder at the task at hand. He told Ji Suk Jin, “Run away from Jun So Min as much as possible.” Once she got wind of this, Jun So Min called him out for betraying their team and chased after Ji Suk Jin. Lee Kwang Soo commented, “I didn’t know just cutting rice cake would be this fun. It feels as if I’m really alive.” 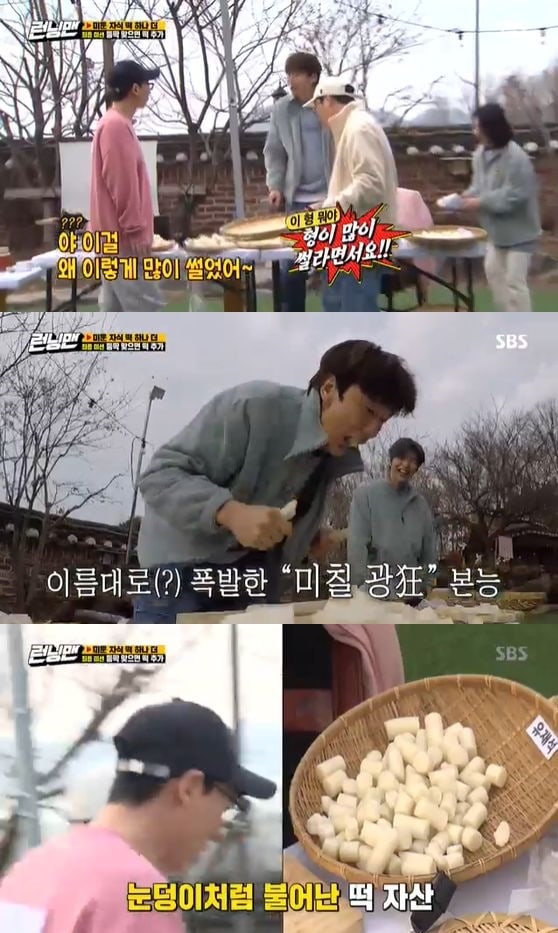 With a smile, Lee Kwang Soo said, “It really feels like I’m at ‘Running Man’ now.” The mothers then congratulated Lee Kwang Soo on his comeback by pretending to throw water at Jun So Min and splashing Lee Kwang Soo’s face instead.