On the March 25 broadcast of “Radio Star,” Yoon Eun Hye appeared as a guest and discussed some changes in her life.

Yoon Eun Hye talked about making a long-awaited return to variety television by coming on the show. She said, “It was difficult [not appearing on TV]. It wasn’t because I didn’t want to, but I thought that I needed to be cautious for many reasons. I feel pressure to be funny when I appear on shows like this but I thought that it would be okay for my health. I’m also appearing so that I can overcome my trauma, so I hope it will be a good memory.”

Yoon Eun Hye was a frequent guest on the popular SBS variety show “X-Man” where she earned the nickname “strong girl.” She explained, “I’m weak at arm wrestling and am only good at wrestling. I liked that I had a healthy image, but it was difficult when I began appearing in dramas. I had difficulty for about two to three years because of the nickname ‘strong girl.'”

She revealed that Kang Ho Dong, one of the former hosts of “X-Man,” praised her strength and told her he would give her a thigh band used in wrestling as a gift when she gets married. When the “Radio Star” hosts named Chae Yeon as her rival, Yoon Eun Hye said, “No, it was the men.” This was proven as they watched a clip of her flipping over SECHSKIES’s Eun Ji Won and Lee Min Ki with ease. She then proved her strength by flipping over Kim Gura in the studio. 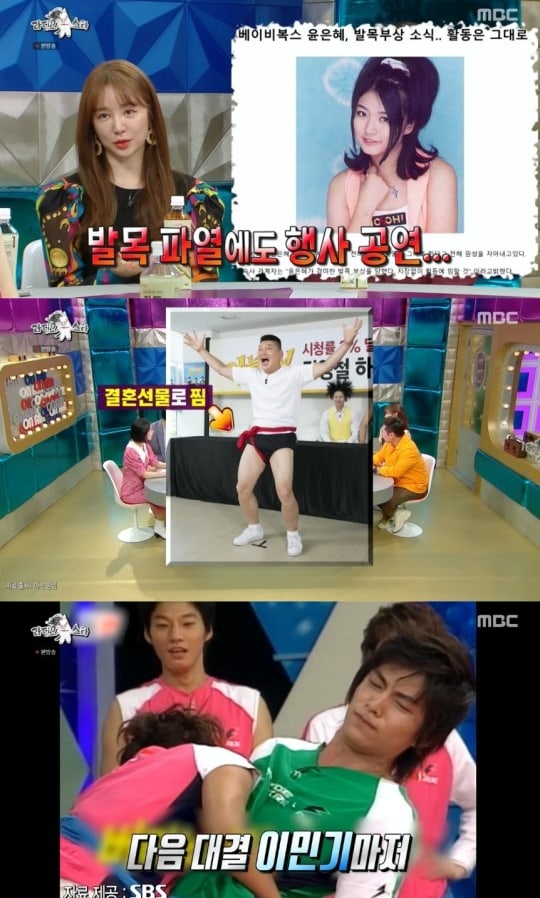 Speaking about a lifestyle change, she said, “It’s been eight years since I quit drinking. At the time, it wasn’t that I drank because I enjoyed it but rather because I had such severe insomnia. After many bad incidents happened when I was 29 years old, I couldn’t sleep without drinking. I could naturally doze off after feeling the effects of alcohol, so it wasn’t getting drunk but feeling comfortable.”

“After that, there was a time where I considered quitting drinking for about a week,” she said. “During that time, my insomnia was cured. I don’t know if it was because of the alcohol, but my mind felt at ease at the time. After changing my lifestyle pattern, I fell asleep easily. I really liked that and began not drinking alcohol.”

Yoon Eun Hye added, “I don’t drink at all now. If I eat chocolate and taste alcohol, I spit it out. It’s my way of controlling. But my dating life also naturally ended too [for eight years]. I stopped going out to those kinds of places and only go to my agency to talk with my CEO. I used to not tell anyone about my difficulties, but after meeting my CEO who’s like a mother figure, I became a chatterbox. So I don’t really feel lonely.”

When the hosts expressed disbelief that someone as beautiful as Yoon Eun Hye hasn’t dated for eight years, she explained, “No one asked me out or asked me for my number. I realized that when I was filming a drama or project and would have physically affectionate scenes, it would be my first time in years. So I’d feel nervous.” 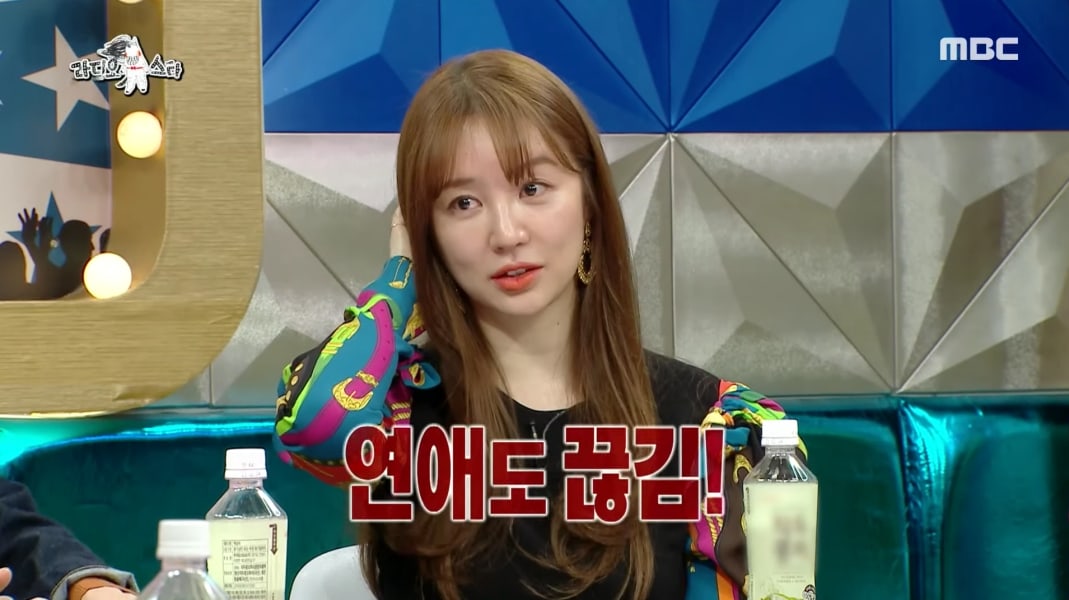 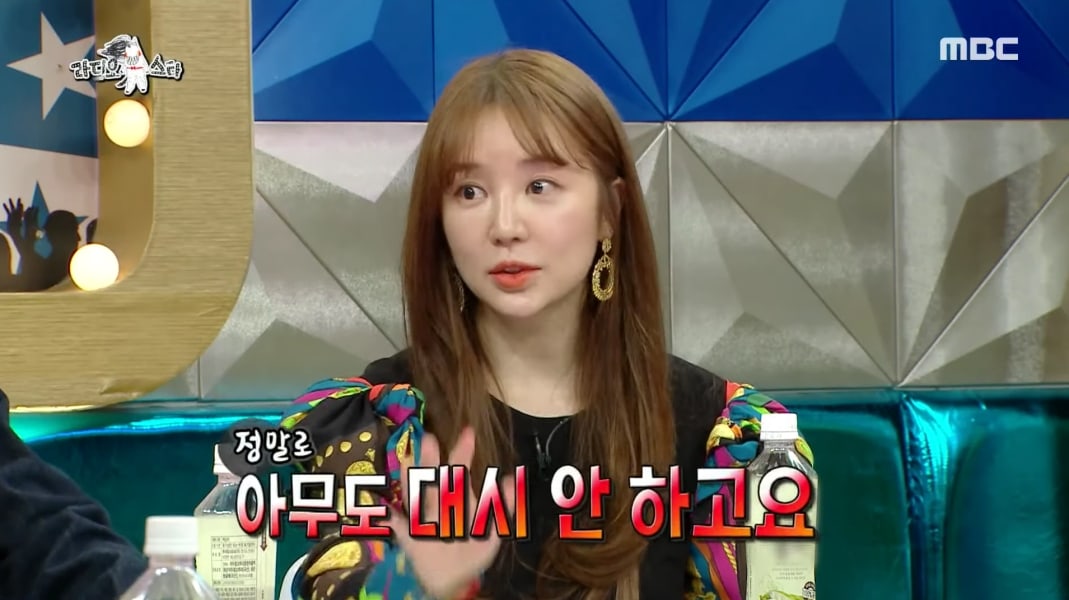 Describing her ways of taking care of her mental health, the actress said, “I try to work through things every day, so I listen to good music and also cry. A while ago, I watched a show starring Kang Soo Ji where she said she cries a lot. I recently remembered that. I tend to cry easily, so I think about difficult things. Strangely enough, I cry a lot when listening to good music.”

She continued, “If someone is mean to me, I dislike that person and focus on that person. But [after crying], I can see my mistakes and weaknesses, and I self-reflect on my tendencies that I haven’t been able to fix yet.”

When asked how long she cries, Yoon Eun Hye answered, “I cry for three to four hours if I’m really upset about something and that’s when my energy gets drained. But usually, it’s for about 30 to 40 minutes.”

She added, “I cry every day. I don’t cry because I’m sad. For example, if I hear about an old rumor about me, I get upset thinking about how that rumor spread when I was just trying to be perfect. I feel so sad about that and cry while self-reflecting on why I lived that way. I then feel lighter after realizing that I shouldn’t live that way now. I used to suppress my emotions, but I felt free after crying every day. I became healthier after breaking free from being judged.” 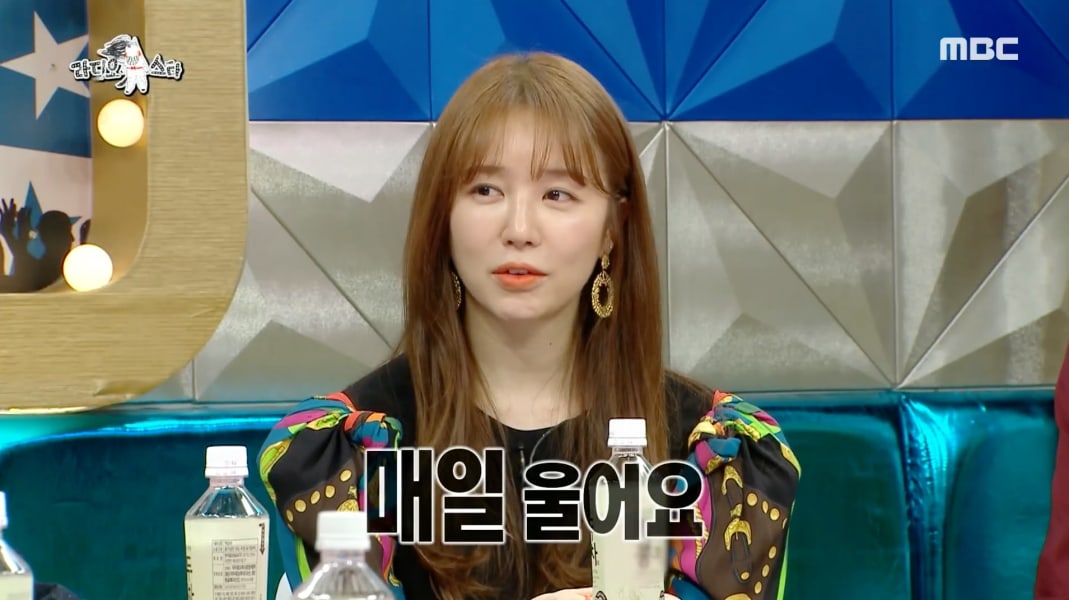 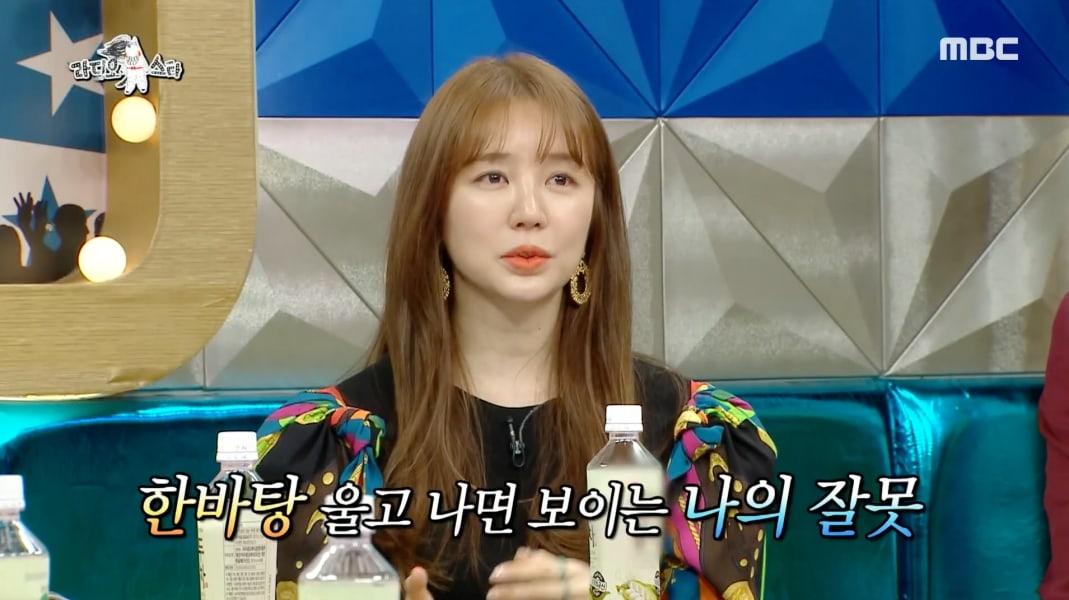 Yoon Eun Hye
Radio Star
How does this article make you feel?