William and Bentley recently came across a mysterious doll!

On the April 5 episode of KBS 2TV’s “The Return of Superman,” William set out to organize his large toy collection. After taking many of his toys to a recycling centre, he could not bear to part ways with them so quickly, so he took a long, sulky stroll around the store.

In contrast to Bentley, who was excited by almost all of the items he saw, the only toy that caught William’s eye was a small baby doll.

Looking at the doll, William said, “It keeps staring at me. I think it likes me.” After seeing that the price was 1,200 won (approximately $1), William announced that the doll had the same name as him, because “one-two-zero” in Korean is pronounced similarly to “William” (and the price was written out as W1,200). 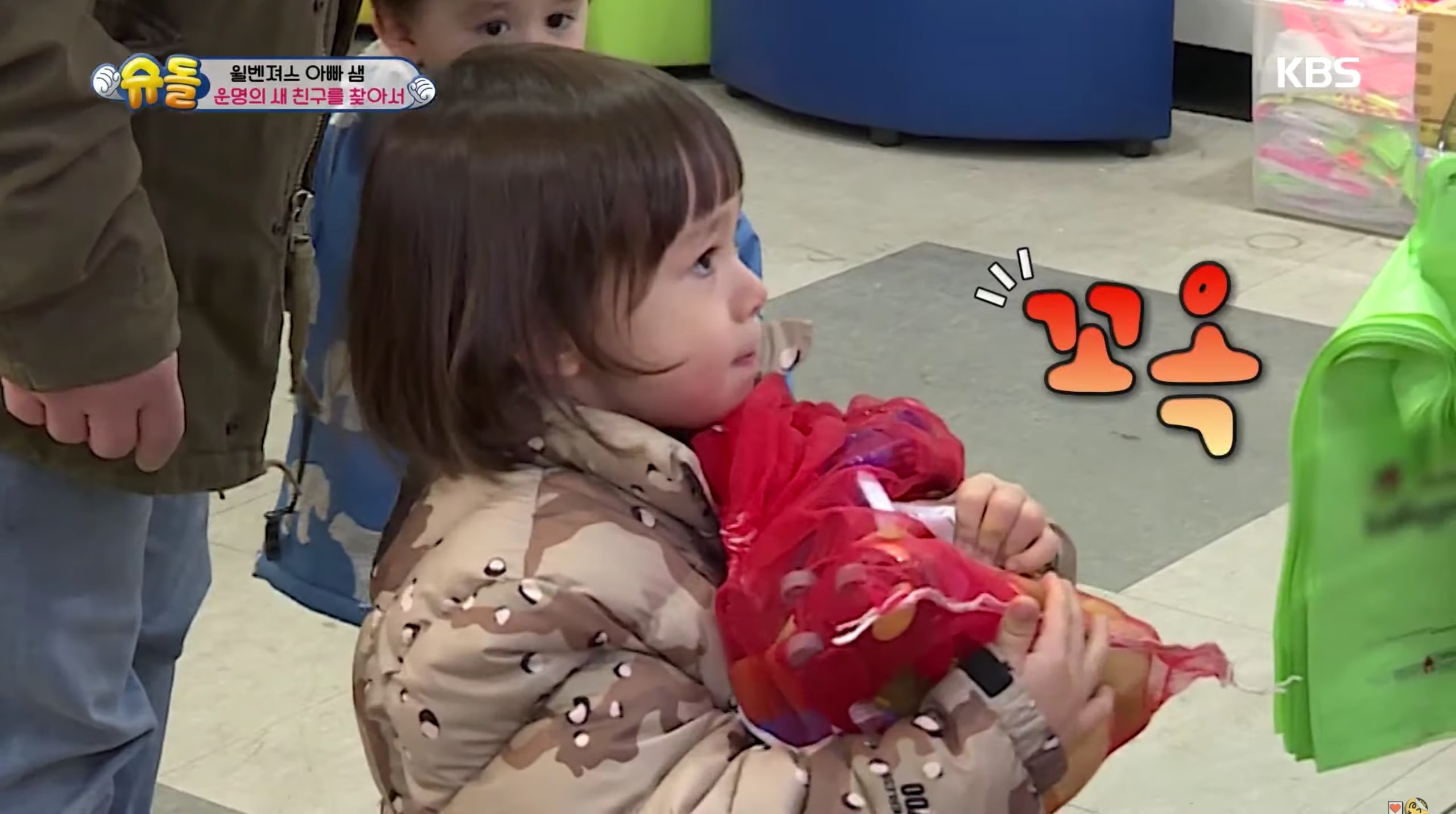 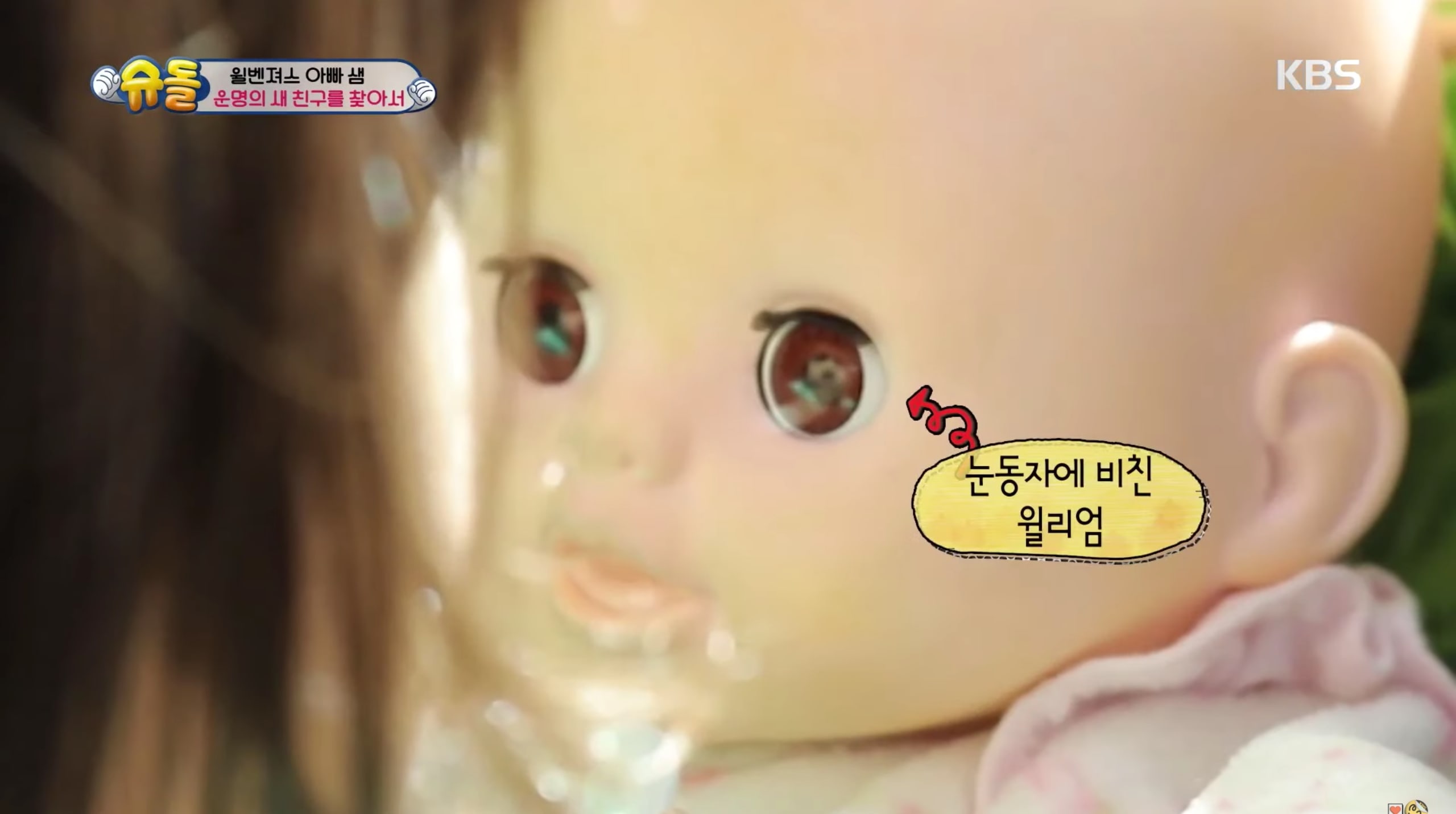 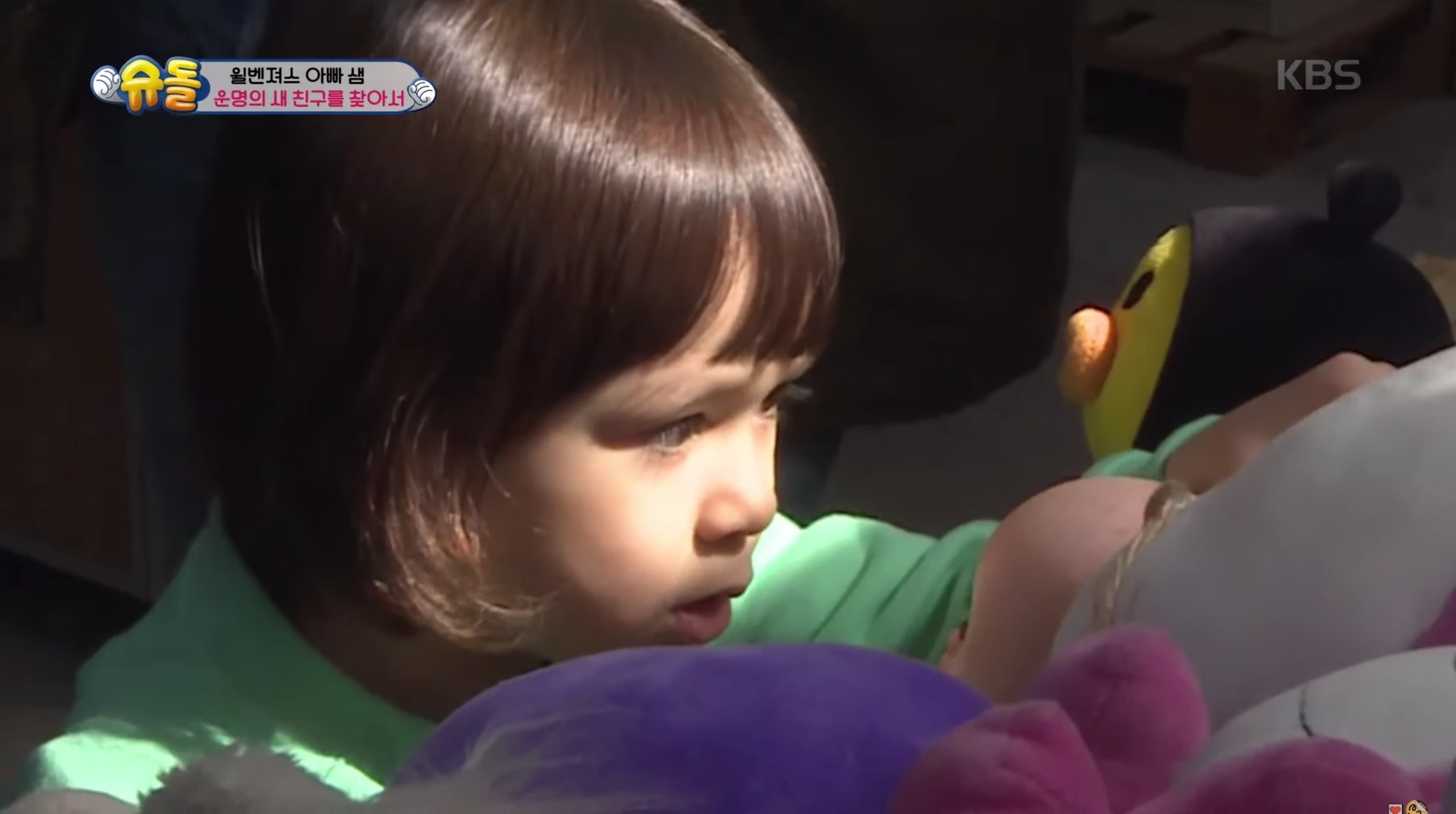 William insisted that it was fate, so they bought the doll to take home, and he added it to his collection before taking a nap.

However, when he woke up, he saw that the stuffed lion beside the doll had fallen off.

William immediately went to find his dad and told him, “Something scary happened. While I was sleeping, the baby doll kicked the lion off the table with its foot.” When his confused dad told him that he must have been dreaming, William decided to forget about the incident. Before eating rice balls with his brother, he took one to his room to give to his new doll.

However, when he returned to his room, he heard a mysterious chewing sound before noticing that the rice ball he’d left by the doll was gone.

Troubled, William worried out loud that the doll would eat his other toys as well, and he left him on the kitchen table before rushing to tell his dad what had happened. 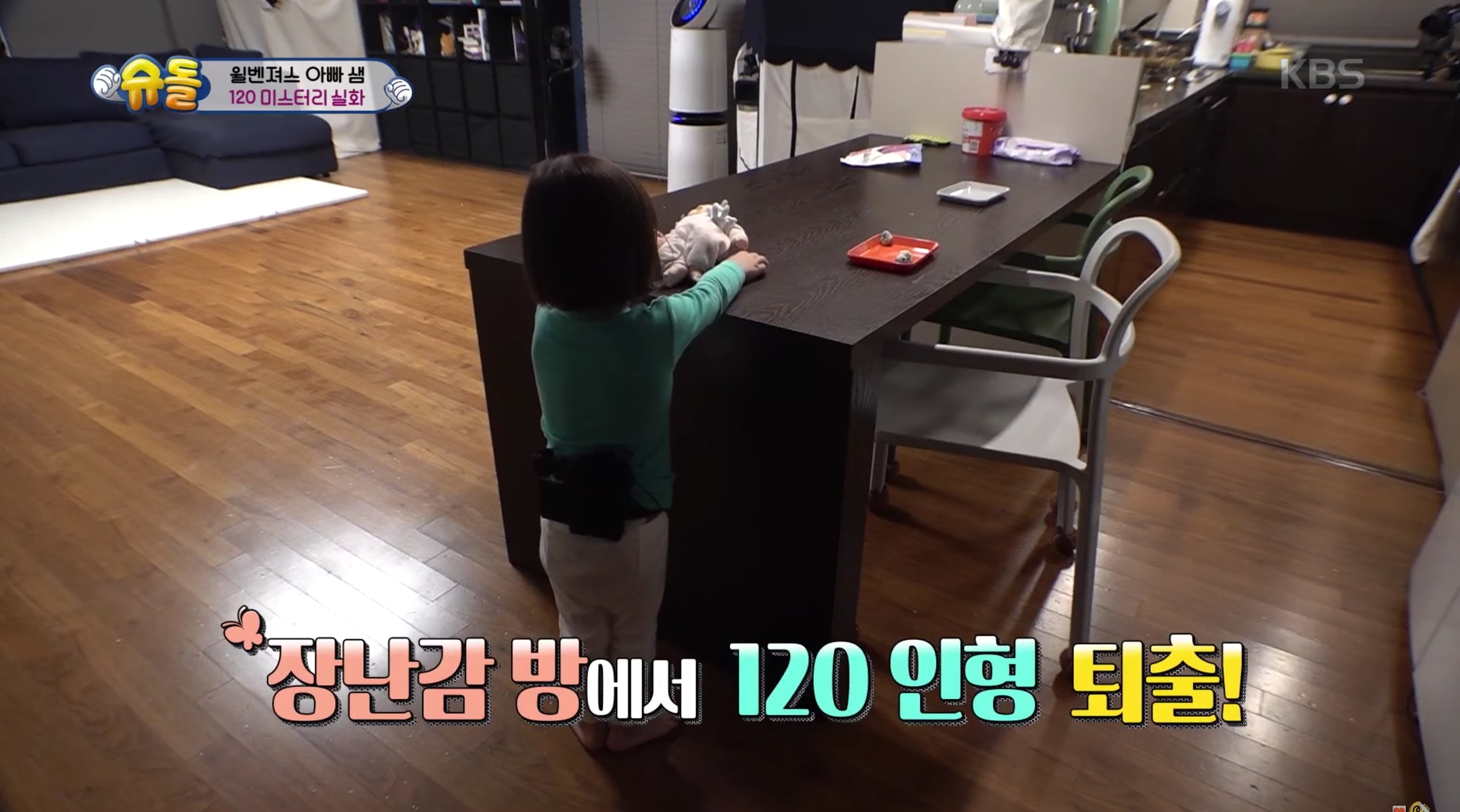 When he went back to the kitchen, William spotted the doll covered in red. Spooked, he announced, “This won’t do. You have to get out of my house,” before leaving the doll outside their front door. 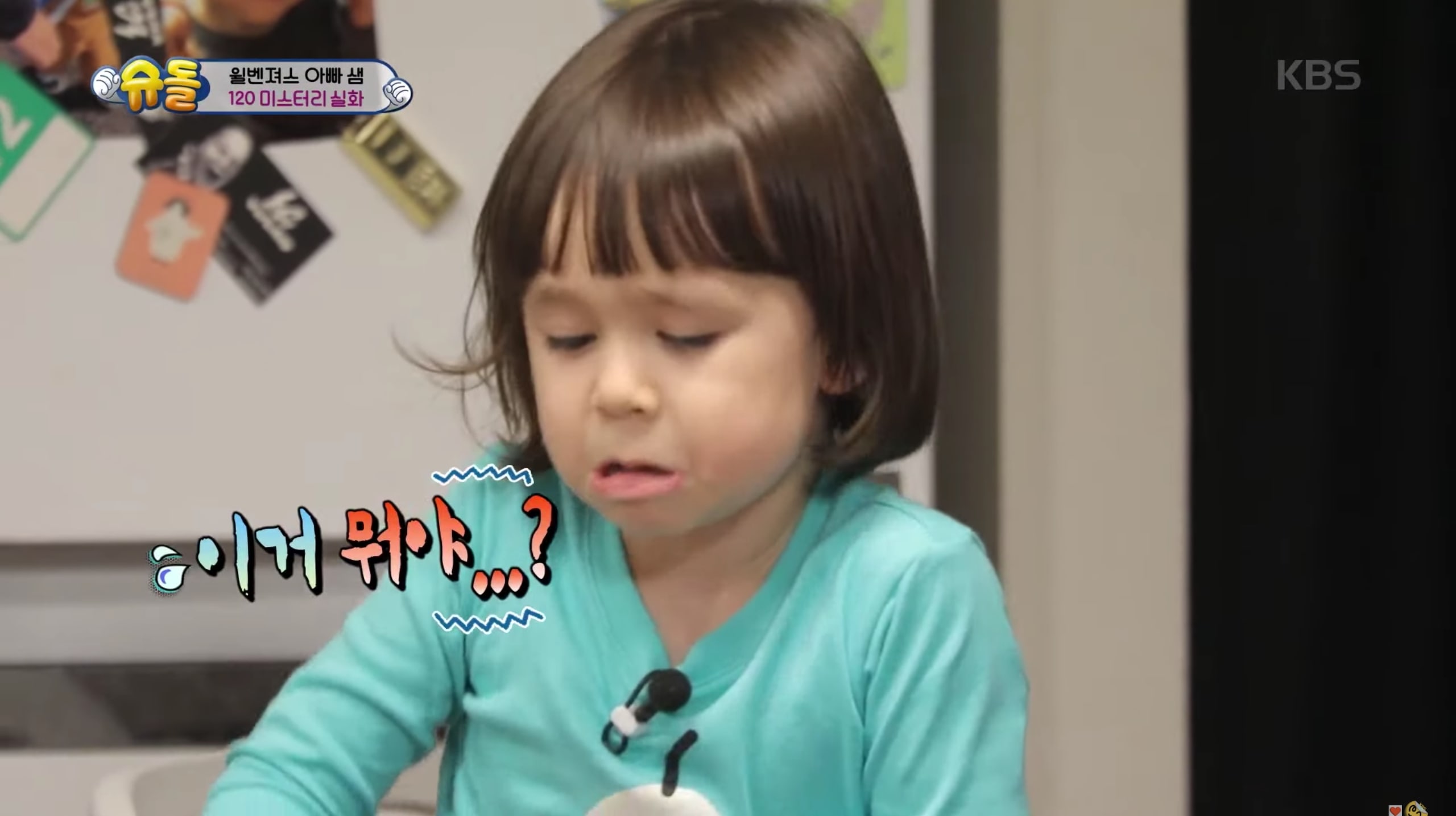 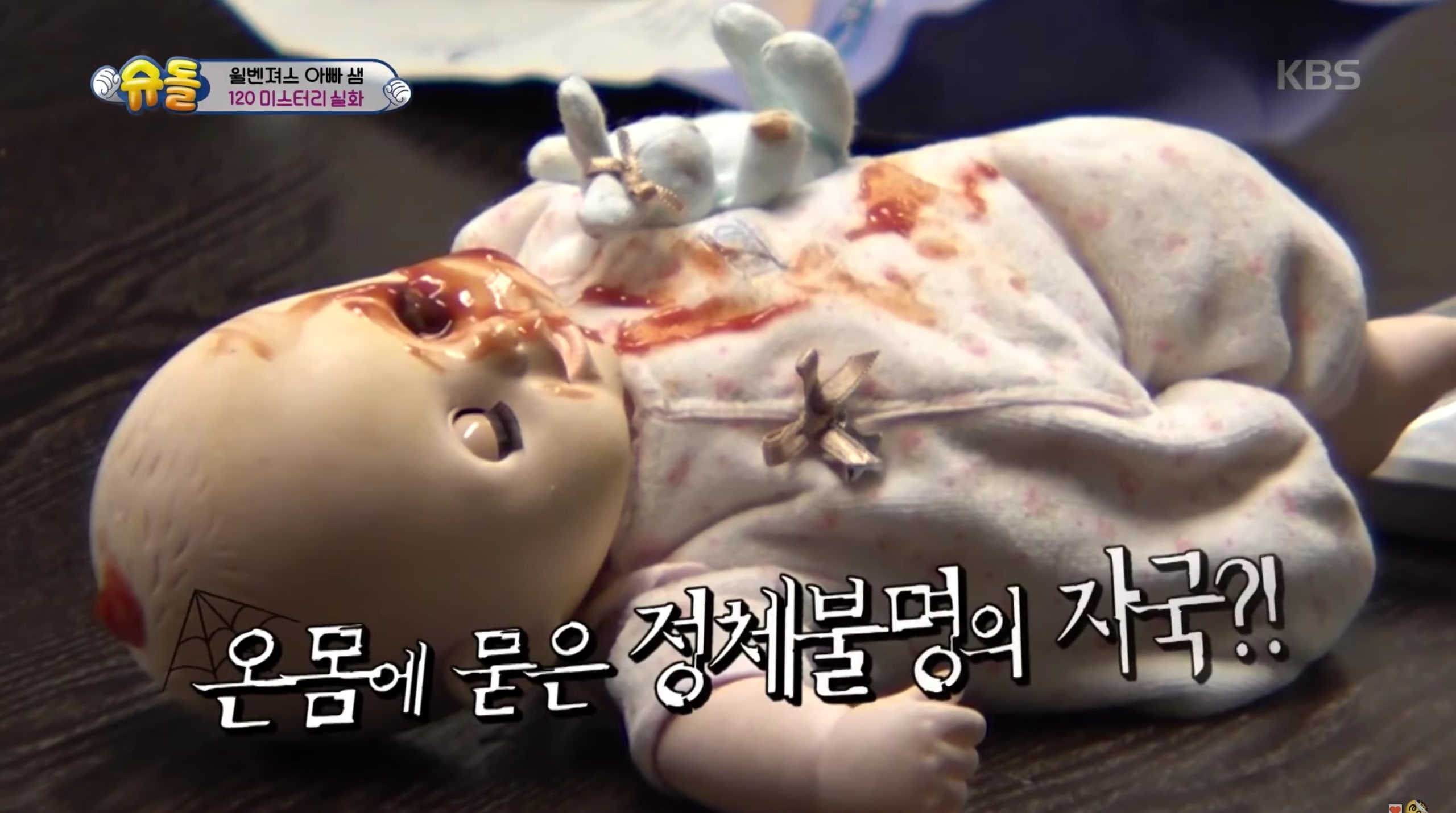 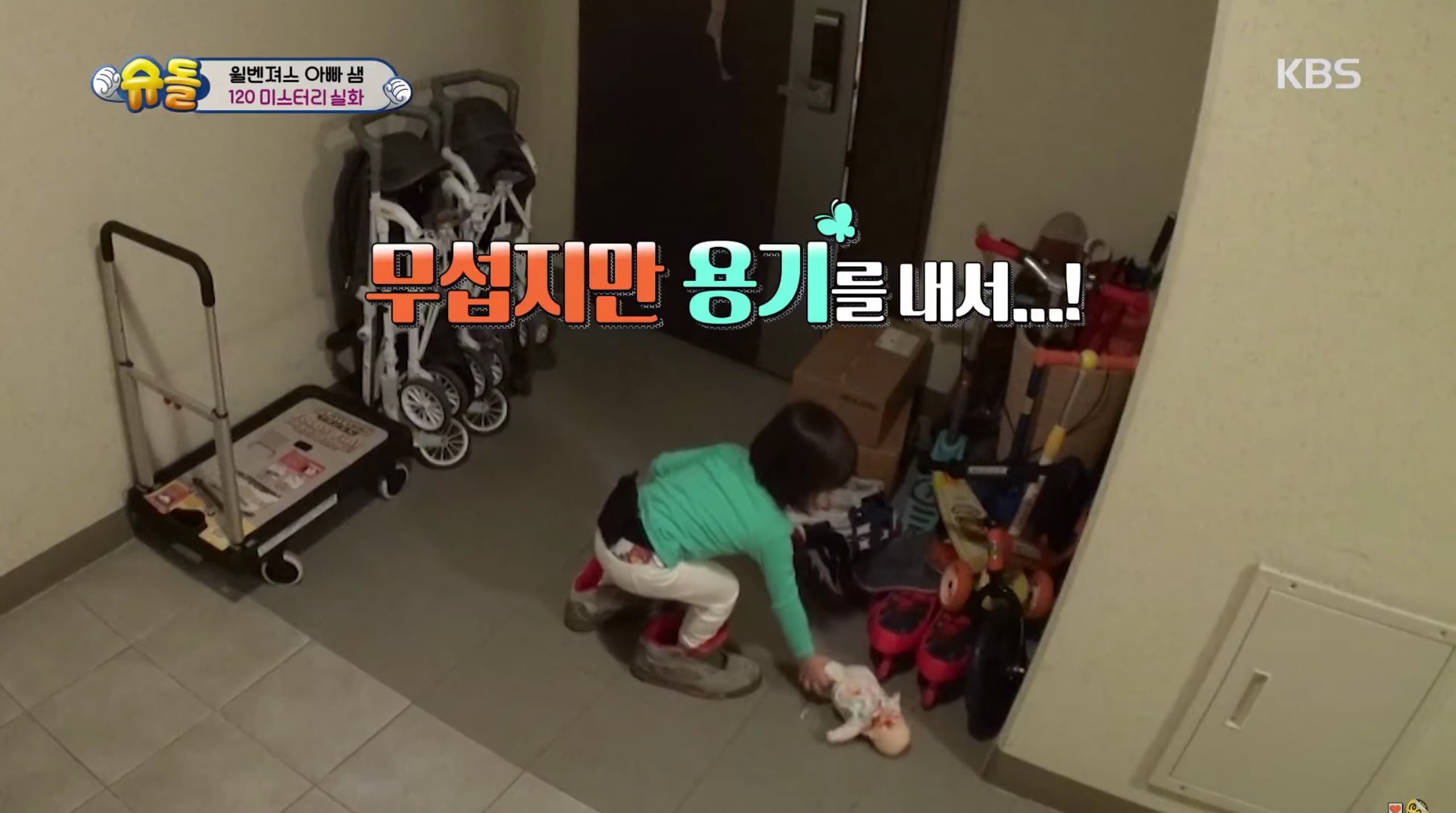 He then returned to his bedroom to comfort his remaining dolls, assuming they were also scared by the mysterious doll.

However, when he heard Bentley talking, William came out of his room and was shocked to find his younger brother playing with the doll again. 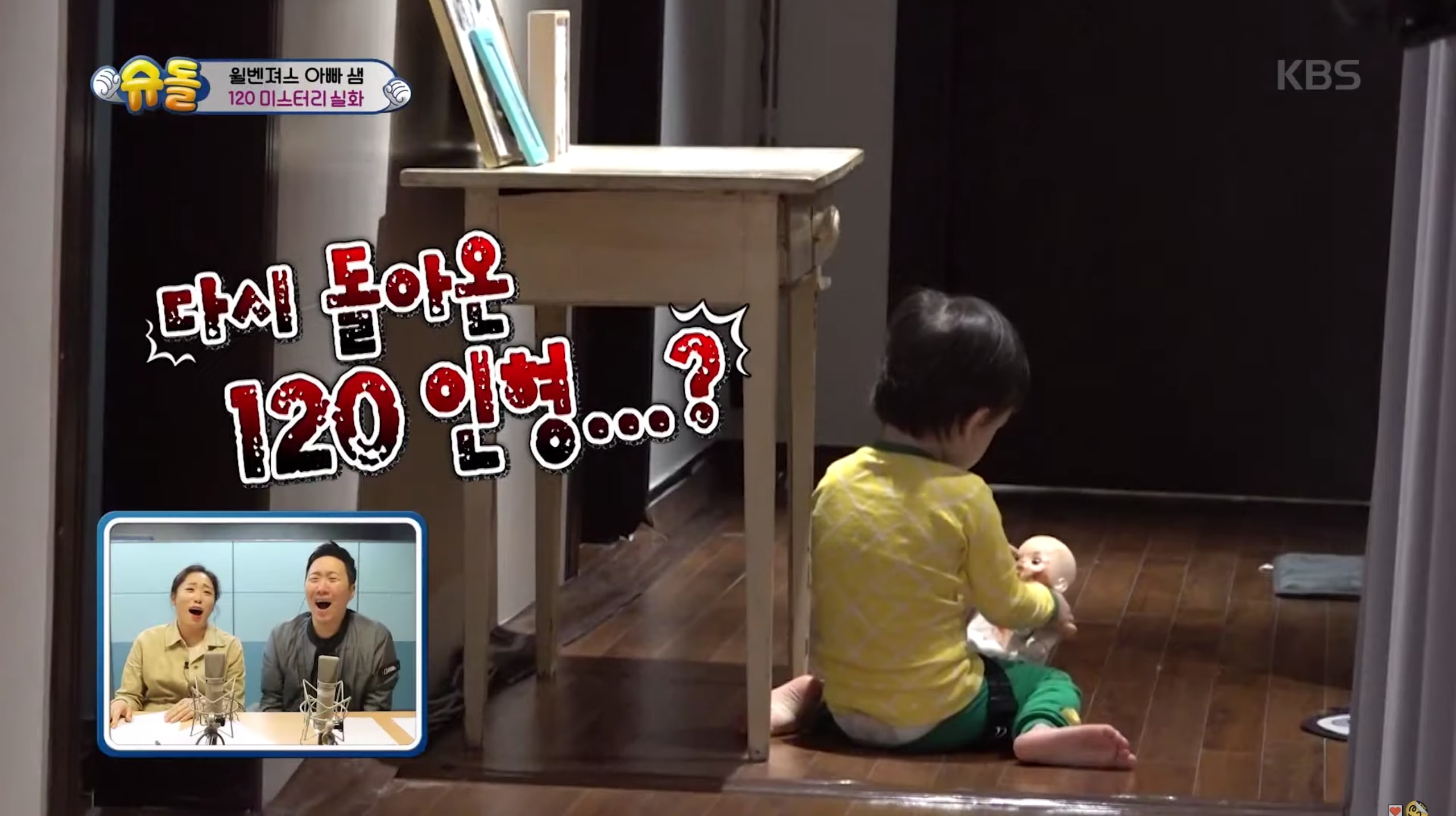 Fortunately, the spooky mystery proved to be a huge misunderstanding. The lion doll had been knocked over by Bentley, who had been trying to hide snacks in the room during William’s nap. The rice balls had also been eaten by none other than Bentley, who had squirted ketchup all over both his food and the doll.

Later, after William had left the doll outside, his dad had gone outside to retrieve some packages. Spotting the abandoned doll, he had brought it back inside for the boys to play with. 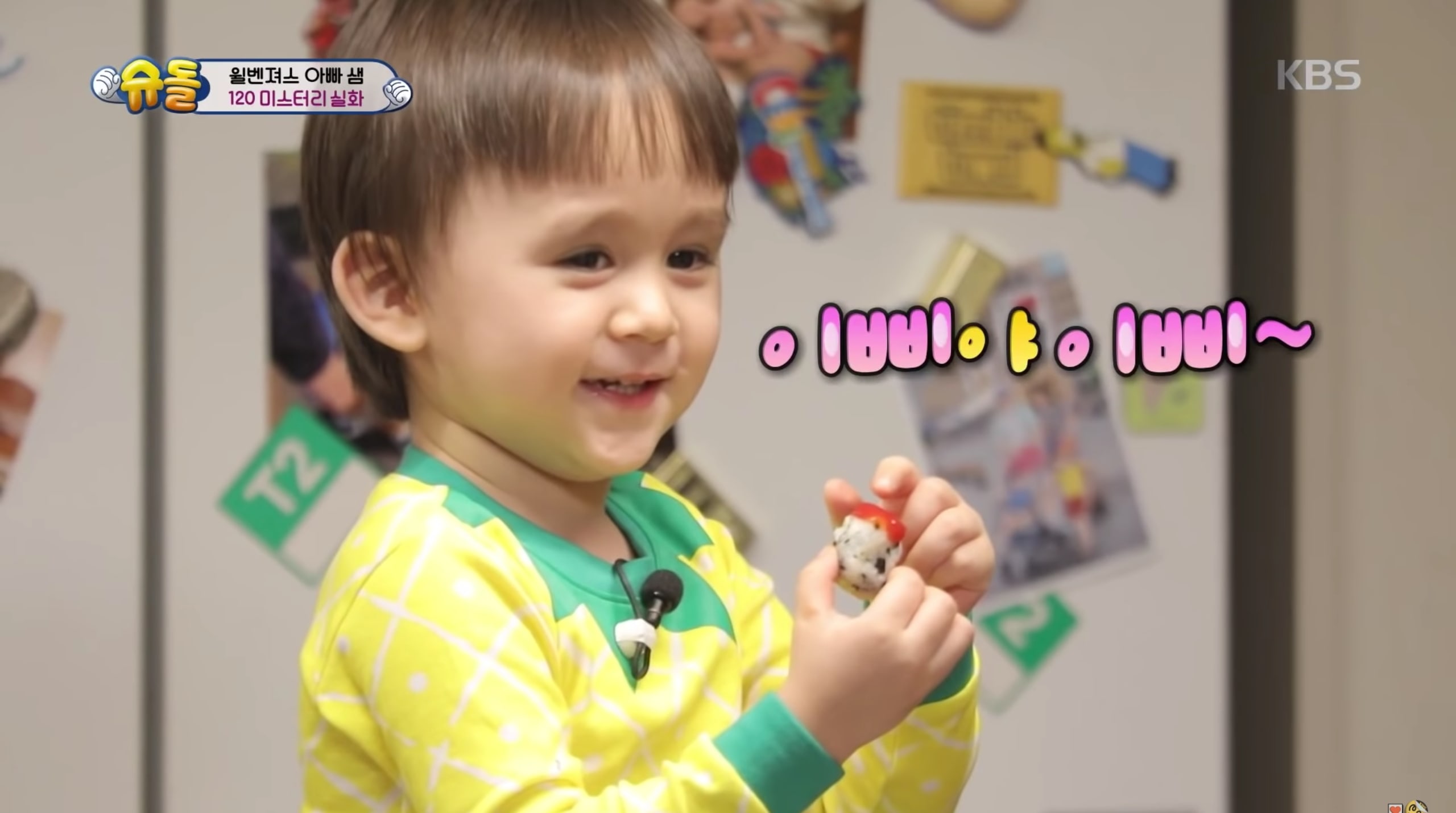 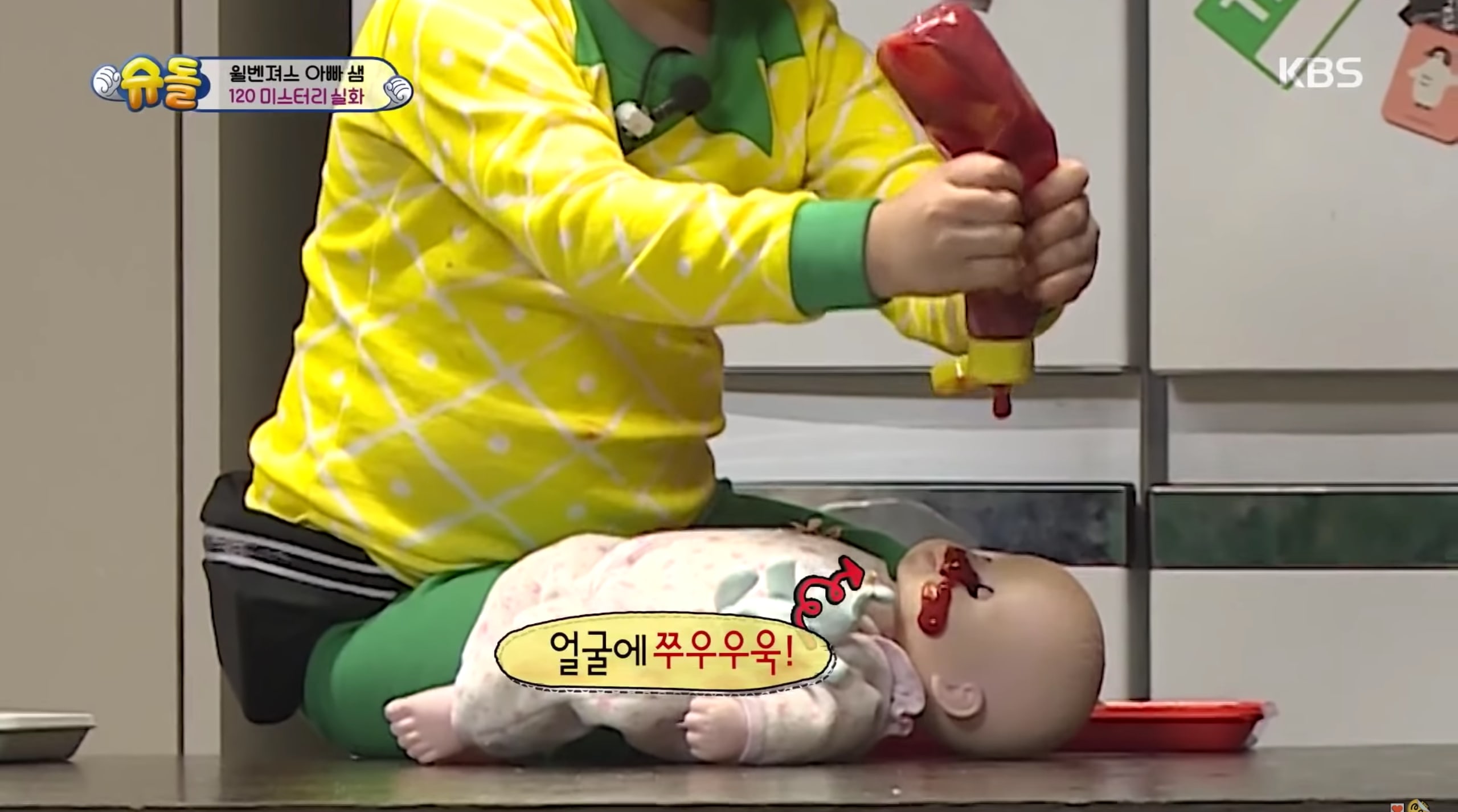 Watch last week’s episode of “The Return of Superman” with English subtitles below!