Apink talked about their successful comeback, junior groups they love, and more!

On April 16, the girl group appeared on “Cultwo Show” after making a comeback earlier this week with “Dumhdurum.” The song quickly took the top spot on many major realtime charts, including Korea’s largest music site Melon. They’ve previously talked about their tearful reaction to coming in No. 1.

Apink was asked on the radio show if they expected their chart success, and Park Chorong said they hadn’t expected they’d achieve such rankings again. “The longer you promote, the more difficult it gets,” she said. “We decided to just aim to give our fans some good memories, and I think that’s why it ended up doing so well.”

Kim Nam Joo shared that she’d cried as soon as she saw the song was No. 1. “I called Chorong and she was crying too,” she said. “It’s like a miracle for us.”

Oh Ha Young said she was so surprised she’d even asked if it was a hidden camera prank. Jung Eun Ji commented, “I was in a daze and I was overwhelmed with emotion. We haven’t performed on a music show yet and we’re not able to see our fans looking happy, so it doesn’t feel real yet.”

DJ Kim Tae Kyun asked the group to describe what they thought when they first heard “Dumhdurum.” Oh Ha Young said, “The guide version had a male voice, so I couldn’t imagine how it would sound at first.” Kim Nam Joo said, “I kept saying to the members that it was so good and we should do it. Even when it was just a guide, it was a song that I wanted to keep on loop.”

Jung Eun Ji said that she’d played the song for her younger brother who’d come up to Seoul for the first time in a while. She shared, “He said to me, ‘Keep playing it. I think it will do well.’ I hoped that the public would also feel the same way when they heard the song.'”

Park Chorong said, “As soon as I heard it, I called the composer and said, ‘It’s so great.’ I thought, ‘This is it,’ and I wanted to right away hear how it would sound with the members’ voices.”

Park Chorong was also asked about how she’ll soon be promoting alongside her friend Solar of MAMAMOO. “First off, I’m really glad,” she said. “I heard that Solar will be promoting solo starting next week, so Bomi and I are planning to support her.” 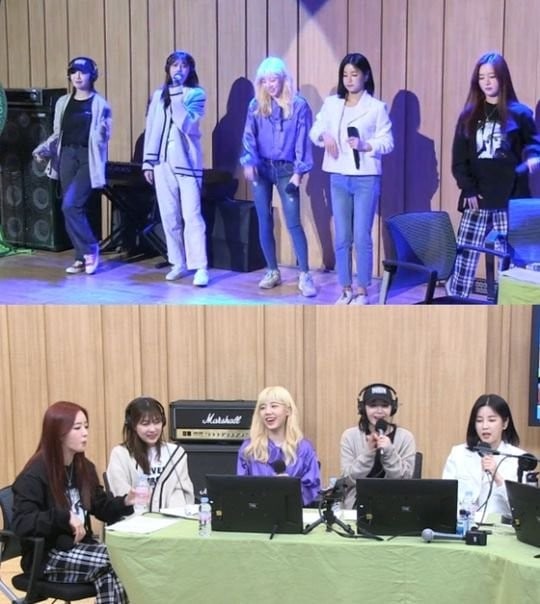 Yoon Bomi took part in making the choreography for the track. Park Chorong shared, “Bomi personally came up with the chorus part along with trainees at our agency and submitted it to the agency. Yoon Bomi’s choreography was chosen through the blind test.” Yoon Bomi addd modestly, “Only two seconds of it made it in,” and then showed off a key point of the dance.

Son Naeun, who wasn’t able to attend the show because she was filming a drama, sent in a message to say, “I miss you all. It’s a shame I couldn’t go today but please give our new song ‘Dumhdurum’ a lot of love, and please read stories on air about people seeing me too. Next time we’ll be there together. ‘Cultwo Show’ is the best!” Son Naeun was referring to a segment of the show where listeners send in stories about having seen the celebrity guests out and about in public.

When asked to name junior artists that caught their eye, Kim Nam Joo named ITZY and her fellow members nodded. Jung Eun Ji also named WJSN (Cosmic Girls), explaining that she felt even more affection for them after having done radio shows with them.

Yoon Bomi said, “Weki Meki is also really cute. Chungha is really cute too.” When the others agreed, she added, “We’re all full of love for our juniors. They’re all celebrities to us.”

Apink will be starting their music show promotions for “Dumhdurum” on the April 17 episode of “Music Bank.”

Apink
Cultwo Show
How does this article make you feel?