MAMAMOO’s Solar Talks About Taking On Unconventional Concepts For Solo Debut, Her Goal For New Album, And More

MAMAMOO’s Solar shared her feelings about making her solo debut!

Solar released her first solo album “Spit It Out” on April 23, and she spoke with the press in an interview about taking on this new challenge.

“I’m nervous more than anything else,” she said. “That’s how hard I’ve worked while preparing for this, and I’m so grateful to everyone who worked hard with me. I’m curious to see what people will think about my first album, and I’m scared too and nervously excited… I’m feeling a lot of different things. Starting with this first solo album, I want to share my musical energy a lot.”

Solar was asked to describe her title track “Spit It Out.” She said, “It’s a track where I ‘spit out’ who I am as a person through the song and the lyrics. The line ‘Spit it out through hot lips’ is in the lyrics a lot, and it means that I’m spitting out my burning passion. It represents how I put all my passion into this album.”

Solar surprised with many of the unconventional concepts she took on for her teasers, including a bald look, long red nails over rubber gloves, and more. When asked how her looks were planned, Solar said, “I’m the type who’s always saving up references. Looking at my closet, I think I tend to buy clothes that I plan to wear on stage more than clothes to wear on a normal day. For this album, I got a lot of help from my older sister who works in design.”

Her bald look in particular sparked a lot of conversation. “Since it’s my first solo album, I tried to express my genuine self through a bald look. A lot of people tried to dissuade me, but I believed that it was the only way for me to show my sincerity. I’m grateful to my agency who trusted in that belief and supported me. I also worried about it, but I was truly grateful and touched to see a lot of people look upon it positively.” 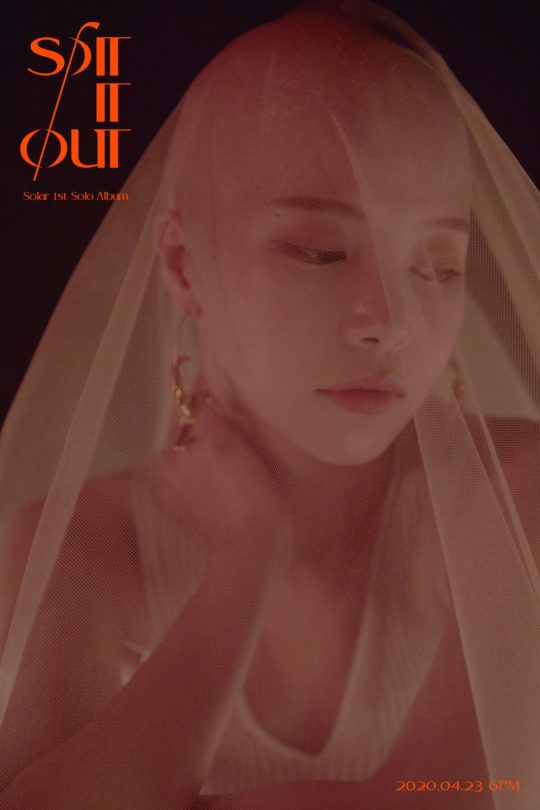 When asked how her fellow members reacted to her teaser images, Solar replied with a laugh that the members get too embarrassed about that and don’t tend to talk a lot about that kind of thing.

Solar also named the part she’d focused on the most for her performance and the “killing point” of her choreography. “If I were to pick one, it would be the ‘Set fire’ part!” she said. “It’s in the section before the chorus where I try to up the excitement a bit more. I really like the move where I strike a match on my heel and blow it out.”

When asked what her goal is for this album, Solar said, “Through this album, I want to become an artist that makes people look forward to what I’ll do next.”

Lastly, Solar shared a message for fans who’ve been waiting for her solo album. “Honestly, I was very touched by fans this time,” she said. “I once again felt how much they’ve been awaiting and wanting my solo album, and I’ll work harder to meet their expectations. I’m so grateful to my fans who always support me that I can’t even put it in words, and let’s be together for a long time! I’m always going to try to be an artist that you’re proud of.”