On May 6 at 6 p.m. KST, IU shared her new digital single “eight,” which was produced by and features BTS’ Suga. IU and Suga both participated in the composition and lyrics for “eight.”

When the charts updated at 7 p.m. KST, they showed that “eight” debuted at No. 1 on Melon, Genie, Bugs, and more charts, and rose to No. 1 on Soribada (which updates every 10 minutes rather than each hour). 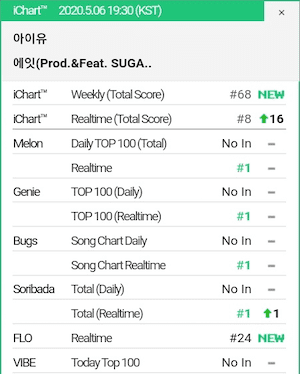 The track also hit the “roof” of Melon and Genie at its debut, meaning it recorded so many streams and downloads that it shot beyond the music sites’ standard graphs.

Are you loving “eight”?