IU’s new collaboration with BTS’ Suga is a certified hit!

As of 7:30 a.m. KST on May 8, IU’s new single “eight“—which was both produced by Suga and features him as an artist—has achieved a certified all-kill. The digital single was released on May 6, and it has been sweeping both domestic realtime music charts and international iTunes charts since. 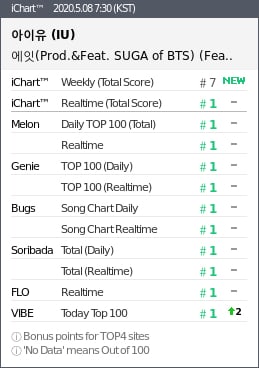 A certified all-kill is awarded to songs that are No. 1 on the daily and realtime charts of Melon, Genie, Bugs, Mnet, Naver, and Soribada; and the realtime charts of Flo and iChart. It remains to be seen if “eight” will also score a perfect all-kill, which requires topping the iChart weekly chart as well.

Congratulations to IU and Suga!