Park Yoochun Apologizes And Shares Regret Over Past Mistakes, Including Denying Drug Use At Press Conference

Park Yoochun opened up about his past and shared hopes for the future.

On May 11, Channel A’s “Heard Through the Grapevine” aired an exclusive interview with Park Yoochun. He began, “I sincerely thank you for creating an opportunity like this for me.”

When asked about what he’s been up to since announcing his retirement from the entertainment industry, Park Yoochun replied, “I’ve been spending most of my time at home with family. I often go hiking when I have a lot on my mind. Instead of staying at home and just thinking, I go outside and get some fresh air. I don’t know if that’s the best way or not, but I’m hiking with the hope that it will be.”

As to whether or not he searches for articles about himself, Park Yoochun answered, “I can’t really look at them. I couldn’t look at articles or TV shows that mention my name because it’s scary.”

Park Yoochun went on to share his thoughts behind the decision to appear on “Heard It Through the Grapevine” to apologize to the public. He said, “I wanted to have the opportunity to say ‘I’m really sorry’ and ask the public for forgiveness, but that in of itself required courage, so I just worried about that. After watching a recent episode about me on ‘Heard It Through the Grapevine,’ I worried about it a lot, and it was the reason I decided to give an apology.”

The singer-actor has largely remained silent through his various controversies over the years. He said, “When I thought about speaking to the public at any point, it made me wonder if it was alright for me to do so. I felt one way, but I thought that people might think, ‘He’s apologizing to make himself feel better.””

Crying as he said this, Park Yoochun continued, “I really tried not to cry. I think even this will be seen negatively.” After pausing the interview, he said, “I wanted to apologize during my time of contemplation. I realized that this feeling is something I’m going to have to live with for the rest of my life. I’m feeling a lot of regret.” 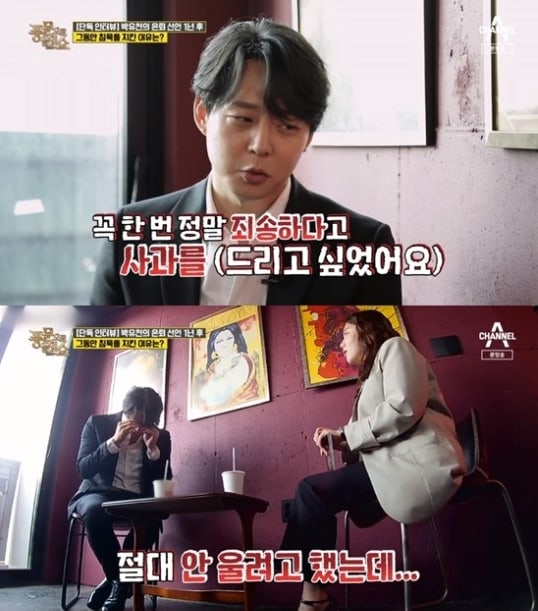 At a press conference in April 2019, Park Yoo Chun denied allegations of illegal drug use and stated that he would retire as a celebrity if he tested positive for drugs. He then tested positive for a drug test by the National Forensic Service and confessed to instances of drug use. He was given a 10-month prison sentence that is suspended for two years of probation and treatment.

“It was an extreme decision,” he said. “I wasn’t in the right mind, to the point where I can’t understand how I came to that decision and said that. I was in a state where I couldn’t assess the situation. I didn’t think about it with my next move in mind and didn’t have time to think. Looking back, I think I was really scared. I received a lot of criticism over my past incident, and I thought that I might end up going through another time of despair because of that criticism, and so I wasn’t in the right mind to think about anything else. It was my fault. I accept that.”

He continued, “I think a lot about how it would’ve been better if I had admitted and asked for forgiveness at the time. I regret that and have no excuses for that.” 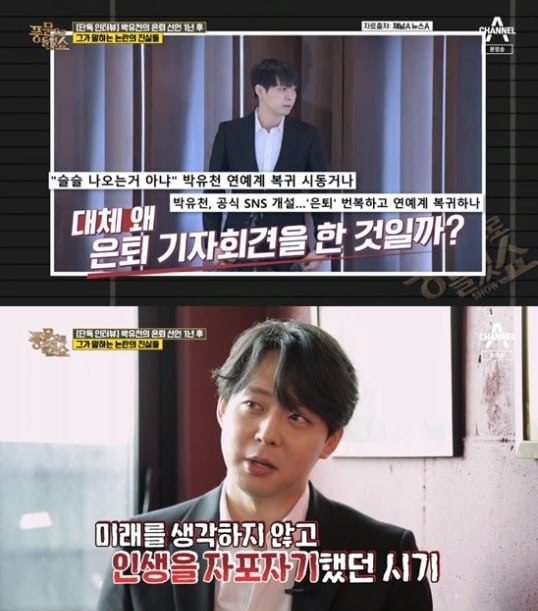 Following his contract termination with C-Jes Entertainment, Park Yoochun seemed to be following through with his retirement. But he was swept up in controversy once again after announcing a Bangkok fan meeting in January and photo book release in March. In April, he faced more criticism after launching his official fansite “Blue Cielo” where fans could join for the fee of 66,000 won (approximately $54).

Park Yoochun explained, “My social media accounts, fansite, and the photo book were things I could do because there are people who support me. I received a lot of love while promoting for 17 years, and I thought that was the best way to repay those people for their love. Although the majority of people might not feel that way, I wanted to show everything to those who wanted to know about what I was up to. I promoted little by little because I thought that was a way to show my consideration for those people.”

When asked if he’s planning to return to the entertainment industry, Park Yoochun replied, “[The controversy] is definitely something I have to endure. I don’t know how long it’ll take to change public opinion and don’t know if it’ll change no matter how much time passes. I think it would be shameless to discuss a return.” 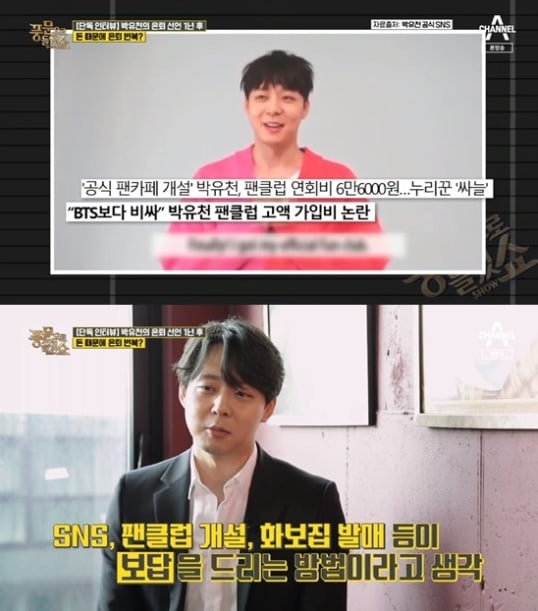 Speaking about avoiding the press until now, he stated, “I had been promoting for a long time while being taken care of, so I just thought that someone would take care of it. I was scared, so I hid and avoided it. What changed after this is that I learned that I’m living my own life. Enduring all kinds of criticism has changed my life and I’ve learned a lot.”

He concluded the interview with a message to fans. “There are people who receive criticism for my mistakes, for the reason that they support someone like me, and I’m determined to work hard even if it’s just for those people,” he said. “If I don’t give up on the future and live sincerely and honestly, I have hope that there might be good days ahead.”

Park Yoochun added, “I think saying that I’m really sorry and apologizing is everything. And this is a promise to myself as well, but I really want to tell you that I’m not going to make the same mistake twice and I’ll make sure to follow through with this. I’ll work hard to live honestly.”