BOL4’s Ahn Ji Young appeared as a guest on the May 13 episode of “Radio Star” and she shared how upset she was about recent rumors.

BOL4 was originally a duo with members Ahn Ji Young and Woo Ji Yoon. Last month, it was announced that Woo Ji Yoon has left the duo and Ahn Ji Young will continue promoting under the name BOL4.

Ahn Ji Young talked about Woo Ji Yoon’s departure while on “Radio Star.” She said, “She’d talked a lot about [departing] for a while. We promoted together for four years since our debut, and we’ve been together for 10 years since we were in high school.”

She went on to talk about the reason for Woo Ji Yoon leaving the duo. “She had said a lot that she wanted to rest after having worked so hard for four years. She’s someone who enjoys new challenges, so I’m cheering her on. I think that we’ll someday be able to make music together again.”

Ahn Ji Young also shared that she was upset about rumors surrounding Woo Ji Yoon’s departure. “We went our separate ways after making a good choice,” she said. “I was upset when people said they’d known it was going to happen, made her seem like a pitiful person, and blamed it on discord between us. It’s not true that Woo Ji Yoon didn’t have the chance to shine, our relationship wasn’t good, or she was treated poorly. We’re getting along well now too.” 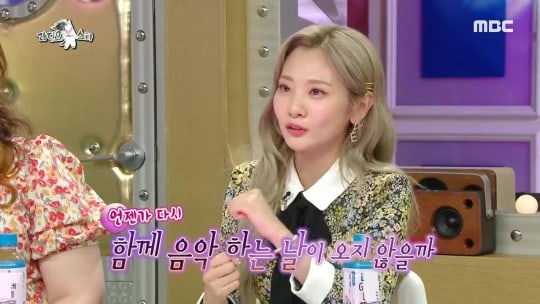 Radio Star
BOL4
How does this article make you feel?