Comedienne Kim Shin Young expressed her love and thanks for BTS’s V!

On the May 20 episode of tvN’s “Yoo Quiz on the Block,” Kim Shin Young appeared on the show as her singer persona Second Aunt Kim Da Vi alongside her close friend and agency CEO Song Eun Yi.

She sang her title track “Gimme Gimme,” and MCs Yoo Jae Suk and Jo Se Ho praised her song. Kim Shin Young then expressed her gratitude towards V, referring to everyone as “nieces and nephews” in fitting with her “aunt” character.

She said, “My nephew BTS’s V turned on my song during a live broadcast saying that he recently found a great song. Thanks to him, I gained eight million nieces and nephews all around the world. Accept lots of my love, nephew V!”

During his May 5 V Live broadcast, V played “Gimme Gimme” as eight million fans tuned in. 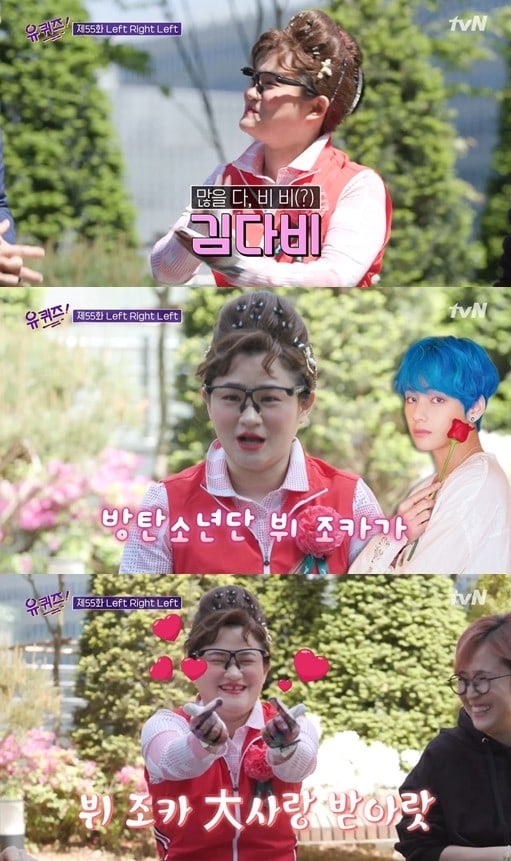 This isn’t the first time Kim Shin Young has spoken about BTS. In 2017, she praised BTS’s attitude and performance skills on her radio show.

“Yoo Quiz on the Block” airs on Wednesdays at 9 p.m. KST.

BTS
Kim Shin Young
V
Yoo Quiz on the Block
How does this article make you feel?