10 Times “The King: Eternal Monarch” Had Us Excited For More

“The King: Eternal Monarch” is gearing up for its final stretch that will undeniably be packed with OMG moments (and hopefully light on the heartbreak). Though the ratings in Korea aren’t as spectacular as we’d hope it’d be, international fans have still flocked to it, and to be fair, underneath the 3,000 product placements, ads, and a sometimes odd choice of editing/directing, there is a solid story held together by a solid cast. And come on, we know this show is doing great in the Kingdom of Corea, because who doesn’t love their King?

So, to get us ready for the final two weeks, here are 10 times “The King: Eternal Monarch” has given us moments that have either made us swoon, laugh, or flat out went OMG:

Warning: Major spoilers for episodes 1 to 12 ahead.

Most of the first episode is naturally dedicated to laying down the groundwork and introducing us to the two worlds of Republic of Korea and Kingdom of Corea. We learn that someone holding Lieutenant Jung Tae Eul’s (Kim Go Eun) ID card saved a young Lee Gon from being murdered 25 years ago, and since then Lee Gon (Lee Min Ho) has been trying to locate her but to no avail. The story also establishes that a powerful artifact, in the form of a bamboo flute, grants its wielder great powers. And when these storyline threads eventually converge with Lee Gon discovering he can open a portal to the Republic of Korea, our two leads finally meet. It is a beautiful moment backed against a gorgeously lit cityscape, and we’ve been hooked ever since.

As expected of any sane person, Tae Eul gives no credence to Lee Gon’s seemingly far-fetched tale. But when she is unable to find any data on him and his story about her ID card eventually comes true, she is forced to reconsider things. So Lee Gon invites Tae Eul to his world to witness it with her own eyes.

He lifts her onto his trusty steed, holds onto her tightly, and they gallop all the way to the Kingdom of Corea. While the skinship itself is swoony as it is, there’s also something terribly romantic about inviting someone into your world where you are vulnerable and open, allowing them to see who you really are.

With Tae Eul now staying at the palace, Court lady Noh situates her in the room farthest away from Lee Gon. He sneaks in, even bringing her a can of beer, and the two have a heart-to-heart about CCTVs and dating. After kissing her gently on the lips, Lee Gon frankly admits that he’s “dating right now,” officially starting their romantic relationship. Hilariously, Tae Eul, being Tae Eul, follows up by telling him to take off his clothes. Wow, that escalated quickly. 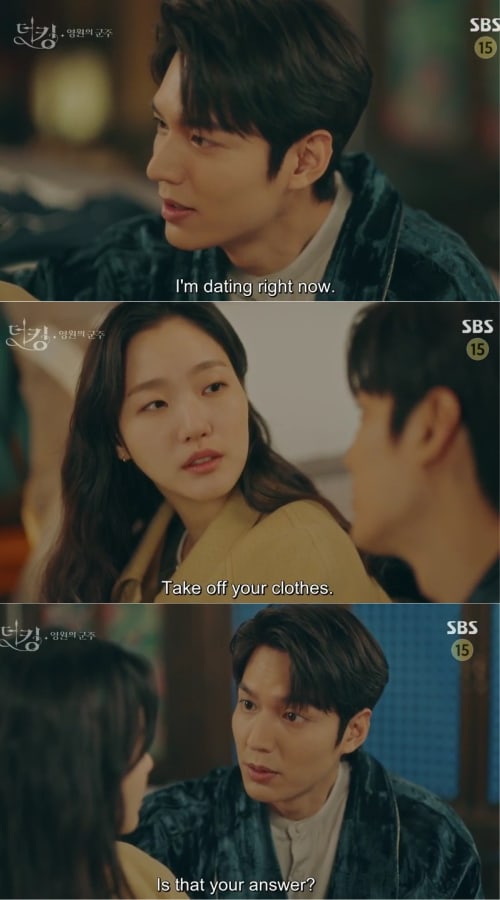 Needless to say, things aren’t going in that direction just yet, and Tae Eul just wanted to have a look at the scar on his shoulder. Heh. 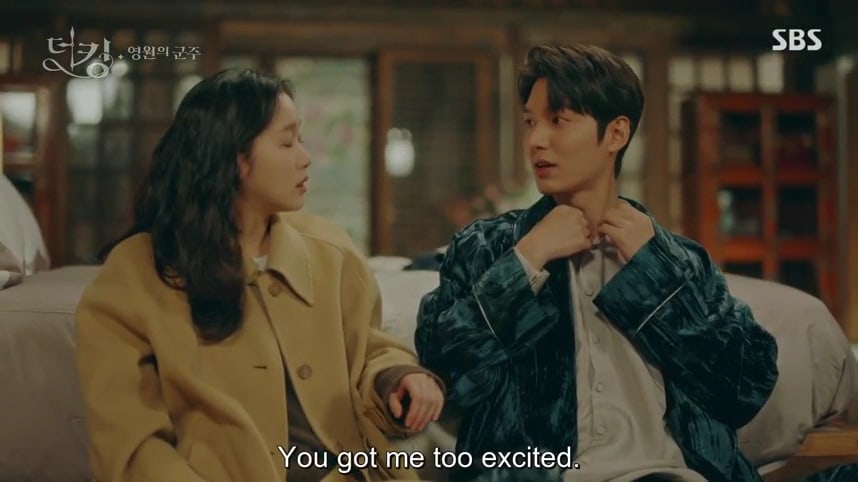 While this isn’t their most memorable kiss to date (that title goes to the little neck kiss in the most recent episode), it’s their first and remains an important milestone.

“I have Yeong today.”

When Lee Gon brings Jo Yeong (Woo Do Hwan) over to the Republic of Korea, the two Jo dopplegangers finally meet, and as expected, we are treated to many comedic scenes. The funniest of the bunch is when Lee Gon brings Jo Yeong out for some stew. While at the restaurant, they come across the hooligans that Lee Gon, Tae Eul, and Shin Jae previously beat up. And even though this time Lee Gon is greatly outnumbered, he is completely unworried as he has his trusty Yeong by his side. Except… the person beside him turns out to be Eun Seob instead. Scaredy-cat Eun Seob runs away at the first sight of danger, then a ninja-esque Yeong sweeps in to kick some ass.

And to keep up appearances, Yeong even pretends to be Eun Seob, sneaking in a few disses at Lee Gon.

Woo Do Hwan does a wonderful job here portraying the duality between the stoic Yeong and the happy-go-lucky Eun Seob, even with the switching of characters in between. We just can’t get enough of him! 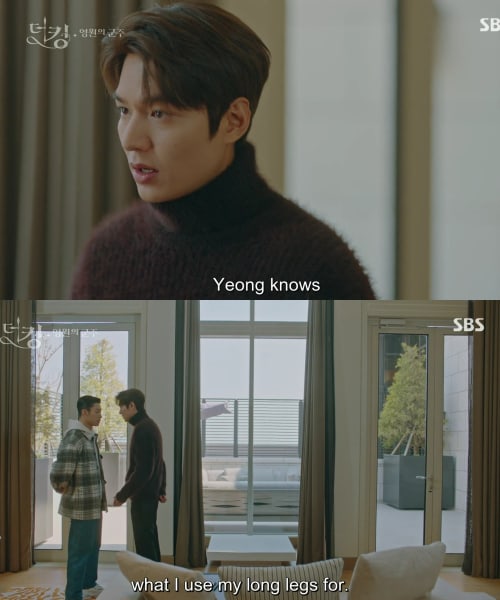 Heh! A bromance for the ages!

What starts out as just a scene showing us how much Lee Gon misses Tae Eul quickly morphs into something much deeper. After Lee Gon finally accesses Yeong’s laptop, he pulls up a folder of surveillance videos on Tae Eul. He watches as she makes her way around the city before coming across a video where Tae Eul walks past Yoyo Kid. And when Yoyo Kid suddenly looks up into the camera as if they’re (is Yoyo kid a boy or girl?) staring right at Lee Gon, he alarmingly notices the date on the video — 2022-05-27.

This means that Lee Gon just watched a video that takes place two years into the future! This not only cements the theory that time travel is actively happening throughout the drama, but it raises the larger and more chilling question — how did that video make its way onto Yeong’s laptop? And with what intention exactly?

“Will you welcome me?”

After Shin Jae (Kim Kyung Nam) sneaks into Lee Gon and Yeong’s hotel room and is confronted by Yeong, the three of them quickly realize that Shin Jae knows more than he lets on. He remembers seeing a young King crying on television — a young King named Lee Gon — which means that Shin Jae is actually from the Kingdom of Corea. This knowledge obviously shakes Shin Jae and he takes three weeks worth of leave and disappears. When he finally resurfaces, he shares his secret with Ta Eul. While he is able to calmly state the facts, it’s obvious that he’s still struggling to come to terms with his origin, and more so, he’s struggling with his identity.

And when he asks with teary eyes if Tae Eul welcomes him, I was done for. His blatant vulnerability, looking like such a lost child who yearned to belong, makes you just want to lean in and give him a big hug.

While watering her seeds, brought all the way from Kingdom of Corea, and urging them to sprout, Tae Eul sees Lee Gon outside her window and rushes over to him. He tells her he crossed the universe to bring her flowers and to also to tell her something he hadn’t said before — that is he is deeply in love with her.

You could sense the confusion in Tae Eul, as she could tell that something was off about Lee Gon, but her yearning for him overpowered all hesitancy. And when he disappears again, Tae Eul has a full on break down, collapsing to the ground while desperately clutching onto her flowers.

It’s a heartbreaking scene, and the significance of it only grows as we continue to move forward in the story. And while there’s been plenty of sweet scenes between them prior to this, this is the first time their relationship feels truly profound. From the way Lee Gon confesses his feelings to the way he looks at her and to how she responds, there is no denying that their love for each other is true and deep and will be enough to carry them through whatever is in store for them next.

Throughout the series, Yoyo Kid pops up here and there, either reading, playing with a yoyo, or riding a bike and crashing into Tae Eul, all while maintaining a mysterious persona. This time, after Tae Eul is abducted and brought to the Kingdom of Corea by Lee Lim’s (Lee Jung Jin) men, she wakes up in a warehouse and sees Yoyo Kid hovering over her. From their conversation, we learn that there’s only one Yoyo Kid between both worlds, and they’re able to move between worlds without the aid of the magical flute.

Yoyo Kid frees Tae Eul and gives her a knife to help her escape, explaining that they’re “trying to restore the balance.” At this point we can only assume that Yoyo Kid is some kind of deity, and with the emphasis put on the red string around their yoyo, I’m guessing a deity of fate who’s trying to put things back in order?

“She is the future queen of the Kingdom of Corea.”

After Tae Eul manages to escape from captivity, she hijacks a car and speeds off, but Lee Lim’s goons stay hot on her trail. Just as she’s pretty much out of options and with a hoard of goons advancing on her, we suddenly hear sirens and helicopters buzzing above. It’s a bird, it’s a plane, it’s… Lee Gon riding in on his trusty steed!

Thoughts of improper use of the country’s resources do come to mind, but hey, anything for the future queen, ammirite? And Lee Gon makes it clear that’s who they’re trying to protect and announces it to the army of police, SWAT team, and royal guards who’ve all arrived on scene. Lee Gon and his troops slice their way through the goons before he rushes to Tae Eul’s side and gives her an embrace brimming with emotions.

Does anyone else get a zombie film vibe from this whole scene? And is it weird that I now want kind of want to see Lee Min Ho in a zombie/apocalyptic movie or drama?

“What happened to that war?”

Court lady Noh sits Tae Eul down for a little heart-to-heart, talking about her own backstory, before casually asking Tae Eul about the war that happened in June of 1950. For those of us who aren’t history buffs, the war Court lady Noh is referring to is assumed to be The Korean War, when North Korea invaded South Korea. And as this war only happens in Tae Eul’s world, this means Court lady Noh was brought to the Kingdom of Corea 67 years ago! This twist was just so subtly dropped that when we finally grasped the implications of what Court lady Noh is saying, you can bet many a minds were blown. Who brought her there? Why did they bring her? And just how many others like her are out there?

Have you been enjoying “The King: Eternal Monarch” so far? Which favorite emotional/OMG moment of yours did I miss out? And how cute is Eun Seob with his little red balloon? Share your favorite moments and theories with us below!

Belinda_C needs more light Eun Seob/Yeong moments before we get into all the heavy stuff! Talk dramas, SEVENTEEN, and Shinhwa with her on Twitter!