On June 2, the Korea Army Training Center uploaded photos of their newest recruits, which includes Ilhoon. Ilhoon enlisted privately on May 28, and he will serve as a public service worker after four weeks of basic training. He is the last BTOB member to enlist following Hyunsik and Yook Sungjae, who also recently enlisted. Find the previous military photos of Hyunsik, Yook Sungjae, Suho, and Jinho here!

In his photo, Ilhoon puts his fans’ hearts at ease with his usual bright smile. 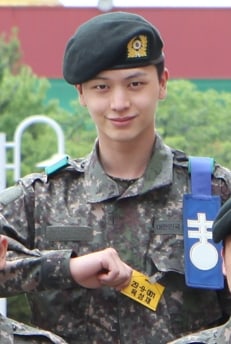