Yoo Ah In and Park Shin Hye sat down for an interview with SBS’s entertainment news program “E-news Exclusive” to talk about their new movie “#ALIVE”!

“#ALIVE” is a “survival thriller” about the sudden outbreak of a mysterious illness that causes those infected to attack other people. As the disease rapidly spreads throughout Seoul and grows out of control, survivors are trapped alone inside their apartments without access to cellular data, Wi-Fi, texting, or phone calls. Yoo Ah In and Park Shin Hye star in the movie as Joon Woo and Yoo Bin, two survivors that are isolated in the middle of a now-dangerous city.

In the interview on the June 3 episode of the show, Park Shin Hye commented, “It didn’t feel like I was on a movie set. Rather, it felt like zombies were really after me.”

Yoo Ah In added with a laugh, “The zombies were actually scary. The high-quality zombie costumes made it possible for us to act realistically. I made strange sounds that made me wonder if they really came from me.” 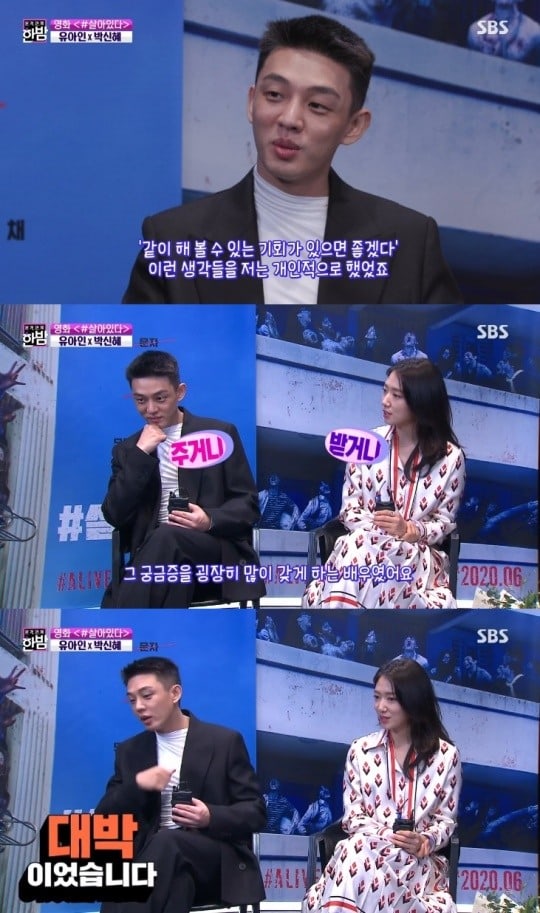 The two actors also talked about their characters. Park Shin Hye described her character Yoo Bin as calm and deliberate. She explained, “She’s a survivor who realizes the danger she’s in and thoroughly prepares herself.” Yoo Ah In said Joon Woo is clumsy and cute rather than thorough and cold like Yoo Bin.

Concerning the action in the film, Park Shin Hye said, “It was just a warm-up. You could see it in the teaser, but I did a wire scene as well.” Yoo Ah in jokingly commented, “She wielded axes and ice axes. That’s her definition of a ‘warm-up.’ If she goes to action school for a month, she better action star than Uma Thurman from ‘Kill Bill.'”

Yoo Ah In previously admitted he wanted to work with Park Shin Hye after watching her in romantic comedies. When asked how he felt about meeting her in real life, he replied, “It was amazing,” causing the actress to burst into laughter.

Check out the latest episode of “E-news Exclusive” below!

Park Shin Hye
Yoo Ah In
E-news Exclusive
How does this article make you feel?