The third round on “Road to Kingdom” continued with amazing collabs by the remaining teams!

On June 4, Mnet’s “Road to Kingdom” featured the second and third pairs of groups staging their collaboration performances, after TOO and VERIVERY got things started last week with their joint performance of BTS’s “ON.”

PENTAGON and ONF decided to take to the stage to perform BLACKPINK’s “Kill This Love.” PENTAGON leader Hui shared the pressure he was feeling as he said, “This is a song that I’ve made an arrangement for before, and I think since PENTAGON and ONF are performing together, we’ll need to show a different side to it.” However, when he shared the arrangement with the teams, both PENTAGON and ONF were pleased with it and said, “It’s like you wrote a movie.”

Hui later said, “We were lucky to be able to perform with ONF, and it would be so great if we could come in first.”

The Boyz and ONEUS then performed their collaboration cover of Sunmi’s “Heroine.” They chose the song with the goal of showing a totally different vibe than the other teams’ intense performances. The Boyz’s Sangyeon explained that they wanted to put on a touching performance by focusing a bit more on the vocals than the dancing.

The title of the song in Korean is a gender-neutral word for a “lead character” or “star,” and the teams stated they’d put on a performance that told their stories and that all the contestants could relate to. They included the sound of fans of all the groups on the show cheering for each of them. The teams watching backstage were surprised to hear their fans cheering their names and said, “This is a really meaningful performance.”

ONEUS and The Boyz said, “It was a performance that goes beyond the competition we’re in and made all the teams the star.”

The rankings were then announced for the collaboration mission, with the winner receiving 5,000 points. PENTAGON and ONF came in first!

PENTAGON’s Kino cried after the ranking was revealed and said, “We’ve never once come in first ever since our debut, so it’s such a relief to be able to receive first place, even if it’s like this. I think our fans will be happy too.” 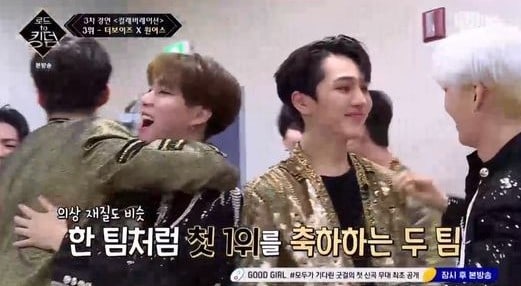 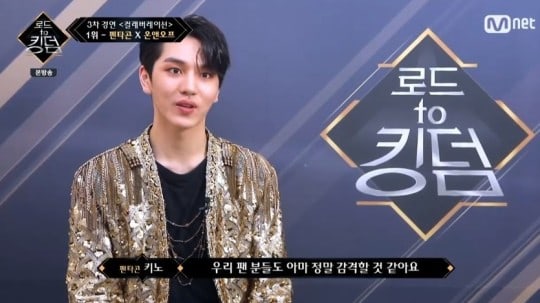 VERIVERY and TOO came in second place, and The Boyz and ONEUS came in third. 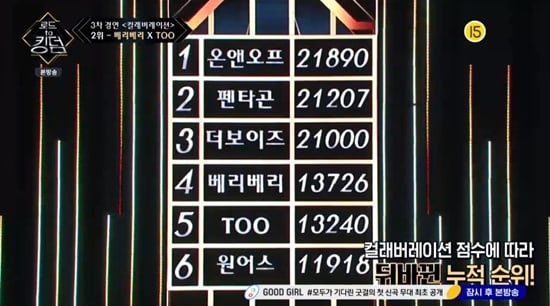 The groups then moved on to their next task in the third round, a “Your Song” mission in which each group performs a song chosen by their partner team in the collaboration battle.

ONEUS was given the challenge of performing INFINITE’s “Be Mine.”

TOO was tasked with performing GOT7’s “Hard Carry,” and GOT7 appeared on the show to give them advice.

What do you think of today’s performances and the results?

PENTAGON
ONF
THE BOYZ
ONEUS
VERIVERY
TOO
Road to Kingdom
How does this article make you feel?