Seeing Double: 14 K-Pop MVs That Play With The Motif Of Mirror Image

Mirrors are a fairly common prop in K-pop music videos; after all, who wouldn’t want to see multiple images of an idol in one shot? But what happens when the reflection in the mirror does something unexpected? When the mirror shows someone a different version of themselves, doesn’t reflect reality, or even reveals something scary? Some K-pop music videos have really embraced this mysterious theme, and whether they use physical mirrors or forgo the glass and portray full-on alter egos, these concepts are all about confronting different parts of our identity or making us wonder how well we really know ourselves. From unexpected reflections to evil alter egos, these 14 MVs play with the motif of mirroring in ways that are intriguingly introspective, and often downright spine-tingling. Get ready for things to get a little trippy!

To start us off, the MV for INFINITE’s 2015 hit “Bad” is filled with mirrors — the guys sing to their reflections throughout the video, dispersed with shots of Sunggyu running through an eerie parking garage. The lyrics tell the story of the guys being bewitched by, well, a “bad” girl, who breaks them down and plays with their emotions, but from whom they just can’t stay away. Things get interesting when Sunggyu finally turns around to confront his pursuer, only to discover that he’s been running from… himself. Plot twist! This suggests that all along the members have been their own enemies for allowing themselves to be so enthralled by this girl — although that doesn’t save some of the guys from their creepy reflection twins at the end of the MV!

The mirroring in VERIVERY’s “Lay Back” makes for an incredibly cool visual effect, with overhead shots that feel like they put the viewer in the back of a mirror, watching two VERIVERYs dance this highly underrated choreo. First the members dance off against reflected versions of themselves, then the full group has a dance battle against the VERIVERY in the mirror, looking defiantly at their reflections before giving it their best. It’s all about challenging yourself to be better, and by the end of the MV, the reflected versions of the members have disappeared, symbolizing VERIVERY achieving the idealized version of themselves after their hard work. We stan!

Rather than a physical mirror, Sunmi’s 2018 release “Siren” simply features multiple Sunmis. The singer is having a relaxing evening at home until another, zombie-like version of herself crawls out of the bathtub. Bathtub Sunmi can’t stop dancing, and normal Sunmi is (understandably) freaked out, so she tries to get away… only to find that her home is filled with more and more versions of herself, dressed in fancy outfits set against lavish backdrops. In the lyrics of “Siren,” Sunmi warns us that “the beautiful me of your fantasies doesn’t exist,” and her desire to escape these dolled up, perfectly posed versions of herself in the MV suggests her aversion to the various images she presents to the public eye. 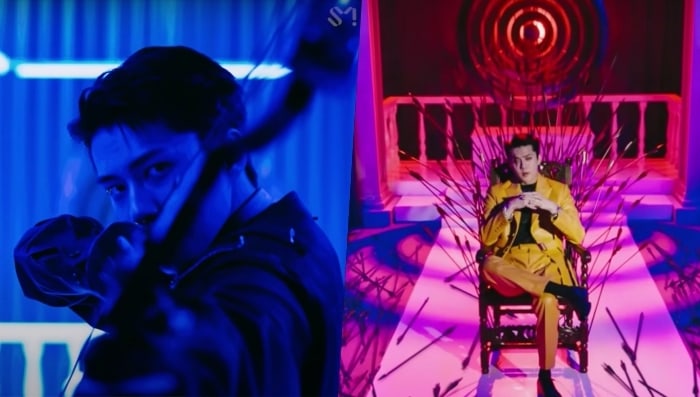 EXO also embraced the alter ego theme for their “Obsession” album and MV, in which each EXO member was mirrored by a darker, evil X-EXO version. The guys all confront their own X-EXO selves in the “Obsession” video, and we’re treated to artistic sequences of these Jekyll-and-Hyde pairings facing off: Sehun aims a bow and arrow as his counterpart sits regally in a hall surrounded by missed shots, and Chen is locked in a chess game with his alter ego. The song describes someone who has formed an unhealthy obsession and possessiveness towards the boys, and the members repeatedly warn their obsessor to “get away.” At the end of the song, however, the lyrics declare that “the strange shadow that chased me… it’s me looking at myself in the mirror,” suggesting that this dark, fanatic force is actually a part of them. But we can’t say we mind having an evil version of EXO running around this MV: it certainly makes for double the sexy! 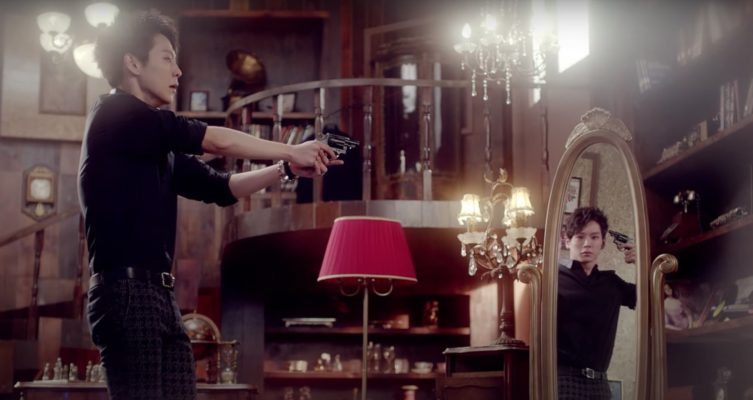 B.A.P’s 2014 rock-infused “1004(Angel)” laments the loss of an angel-like lover who the guys wish they hadn’t let go. The members search for her among different settings: Youngjae gives chase through a maze of mirrors, never quite reaching the woman, and the only way he is able to see her face-to-face is when he confronts his own reflection, signaling that now he can only find her in his own memories. Himchan, seeking to get rid of the part of himself that mistreated the woman, takes aim at himself in the mirror — but the mirror Himchan points the gun at his own head, showing that Himchan cannot end just this part of himself without killing all of him. 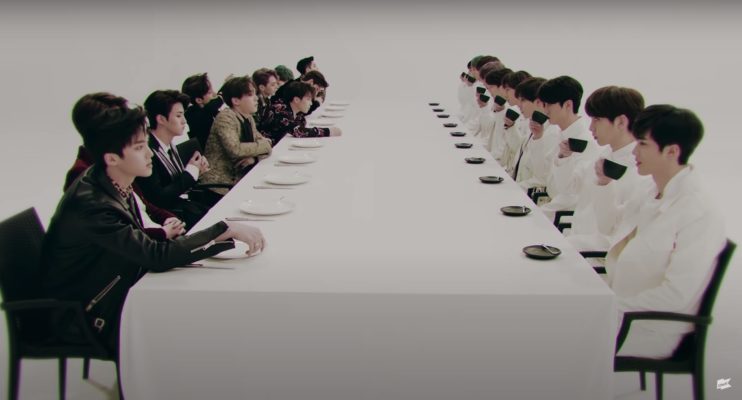 One of PENTAGON’s hidden gems, “Can You Feel It” is a bold confession of romantic feelings. The motif of doubling is shown throughout the MV, as two versions of the group face off over a long table: one PENTAGON is dressed neatly in white and sips politely from teacups, while the other PENTAGON dons dark leather and patterned jackets over a dinner setting. As the song demands the object of their affections answer the guys’ confession, these two versions of the group beckon challengingly towards each other across the table, representing the frustration of their maddening feelings: should they be the gentlemen and play it cool? Or let loose their bad boy side and demand their lover’s heart? 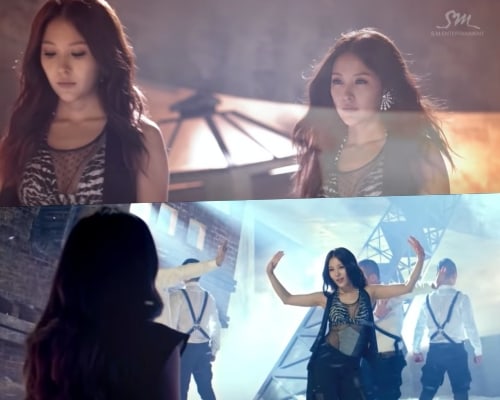 This 2012 BoA throwback starts out with a scene of doubling, when a hazy mirage-like BoA merges with the real BoA. BoA and her “shadow” seem to represent different sides of the singer, one a famous idol and the other a normal person. The lyrics tell us that the shadow protects and inspires BoA as a performer, but has also experienced the pain of stardom. The MV explores this dynamic with scenes of BoA in her bedroom watching a different BoA perform on stage, and we see more and more versions of the singer until the end of the video, when she accepts these different parts of herself and absorbs them as a symbolic internal guiding light. 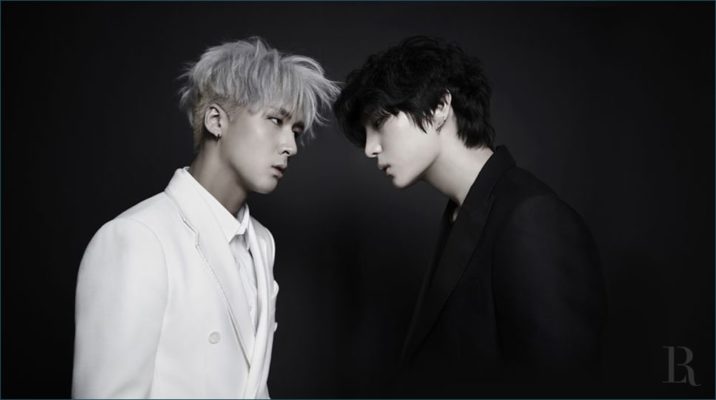 Concept kings that they are, VIXX first explored the theme of alter egos in their classic hit “Hyde,” where the members struggle to contain their inner demonic side around the girl they love. The MV switches between the members, clad in white, acting sweetly, to darkly-dressed versions of the guys sabotaging their relationship and hurting their lady. But the group’s subunit VIXX LR revisited this theme in greater depth with their MV for “Beautiful Liar,” where Ravi and Leo represent two facets of one persona. Ravi portrays Leo’s tumultuous, often self-sabotaging internal emotions as he struggles to express his true feelings to the woman he loves, and the MV is gorgeously symbolic and heart-wrenchingly emotional as the two quite literally wrestle with each other for control. Which version will win out? 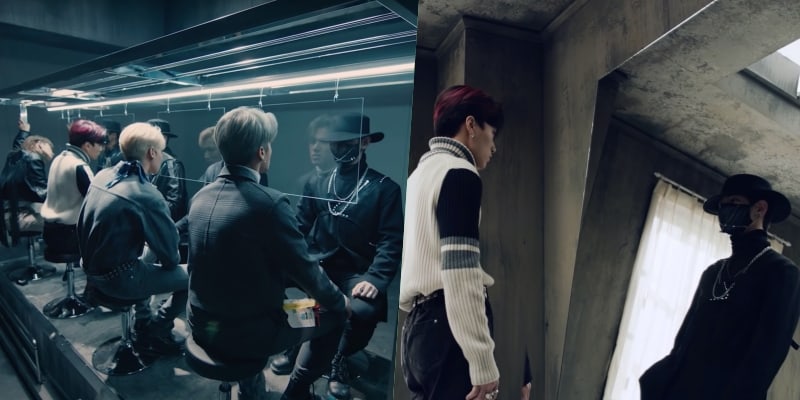 In “Say My Name,” ATEEZ confronts a future version of themselves: the masked ATEEZ that appear in their later music video for “Hala Hala.” As the members face off with their future selves across a variety of richly symbolic scenes, “Hala Hala” era ATEEZ ultimately unmasks, showing the unity of the two groups. The end of the MV cuts between two different sets showing both versions of the group, clad in the respective outfits from each MV, dancing to “Say My Name” — perhaps symbolizing that the group is always seeking to propel themselves forward to newer and bigger things. 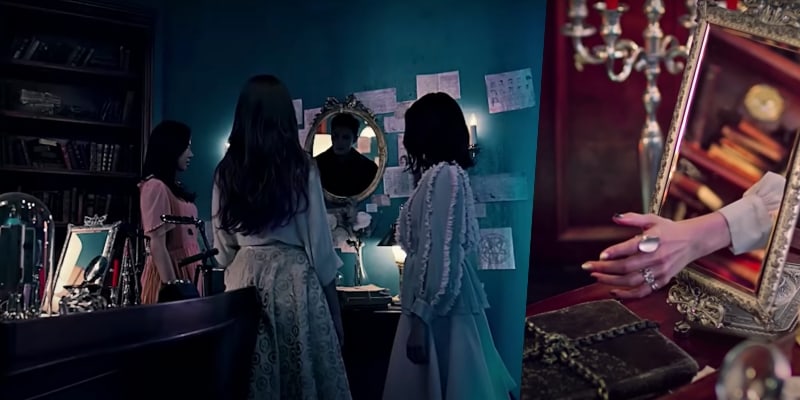 DreamCatcher excels at dark concepts, so it’s no surprise they’ve explored the mysteriousness of the mirror! The mirrors in “Good Night” serve as portals between two overlapping worlds that we see through an old-fashioned study filled with intriguing trinkets. In one world, there’s a man in the room, and in the other, the girls. While he senses that he’s being watched, the male character is unaware that the members are observing him from the other side of his own mirror. Talk about creepy! As the girls wreak destruction in their version of the room, the man’s study is destroyed — but not until the ladies have used a different mirror to steal the book they’re after! 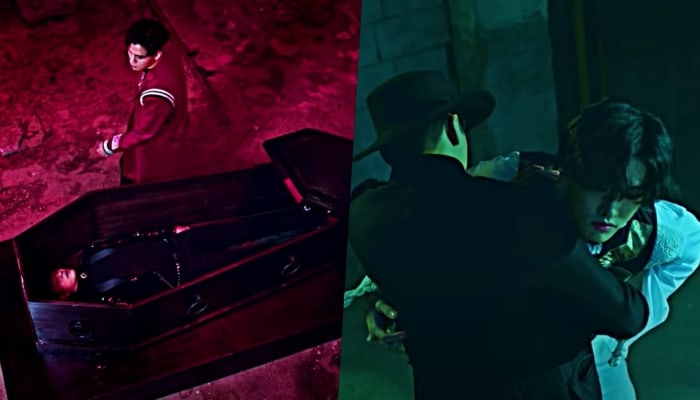 CROSS GENE’s “Black or White” is definitely the darkest MV on this list, taking the Jekyll and Hyde concept to its most extreme. The members begin in various creepy scenes of death, confused and unsure of how they got there — until they are approached by an evil version of themselves, who then proceeds to kill them so that they complete the death scene. This doubling and time-slip narrative is both freaky and meta! Thankfully, the guys are somehow revived back to life at the end. 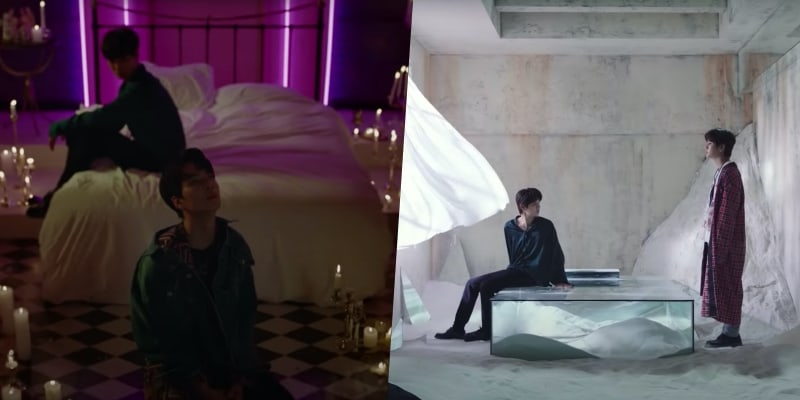 There’s a lot of mirroring in NU’EST’s 2017 release “Where You At,” from the literal mirror in the middle of a quarry landscape to the scenes that show the members coming face to face with themselves. The guys are all trapped in super aesthetic settings, from never-ending hallways to various mysterious rooms filled with candles, sand, or water. The rooms seem representative of each member’s own personal struggles, and it is only through confronting their double — and therefore themselves — that they are able to escape and overcome what has held them back.

Who can forget this famous moment from the end of BTS’s classic “Blood Sweat & Tears”? After Jin notices that the white lilies beside him are reflected as purple blossoms in the mirror, he turns his gaze on himself, only to watch cracks form down the face of his own reflection. This cracking seems to symbolize the internal discord of wanting something while knowing it will only hurt you in the end; “Blood Sweat & Tears” is, after all, about allowing oneself to be tempted into an all-consuming, harmful passion. But perhaps there is a brighter side to the internal strife, as the quote above the mirror, from the philosopher Friedrich Nietzsche, reads: “One must still have chaos in oneself to be able to give birth to a dancing star.” 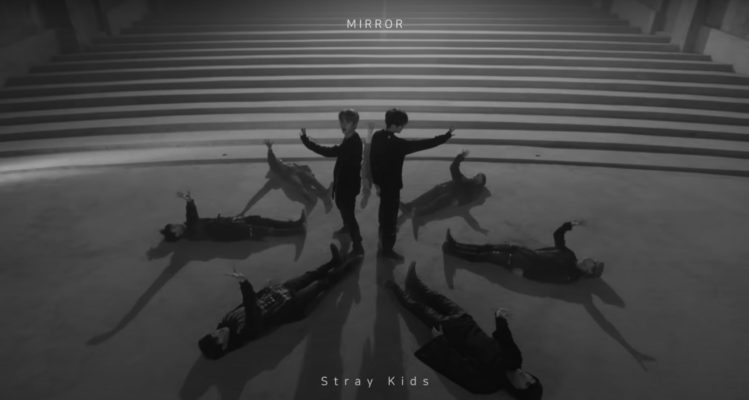 The various mirrors in this Stray Kids’s performance video don’t show creepy or unexpected things like some of the other videos on this list, but “Mirror” gets a shoutout for the unique way its choreography plays with the concept of reflection. It features a multitude of mirrored sequences that are not only mesmerizing to watch, but also befitting of a song that is about searching inside yourself to discover who you really are — which is especially challenging, as the lyrics point out, when you’re young and still trying to figure yourself out!

Hey Soompiers, which of these MVs is your favorite? How do you feel about the theme of mirroring: creepy, or introspective and cool? Let us know in the comments!