Ji Chang Wook and Lee Kwang Soo made a hilariously terrible team on the latest episode of “Running Man”!

On the June 14 episode of the SBS variety show, Ji Chang Wook appeared as a guest alongside Kim Yoo Jung, Han Sun Hwa, and Do Sang Woo, his co-stars from the upcoming drama “Backstreet Rookie.” Each guest formed a team with two “Running Man” members, and Ji Chang Wook wound up on a team with fellow actors Lee Kwang Soo and Song Ji Hyo.

In keeping with the theme of “Backstreet Rookie,” in which Ji Chang Wook plays an accident-prone convenience store owner and Kim Yoo Jung plays his part-time employee, the first game of the episode pitted the teams against each other inside a real-life convenience store.

For each round, one team had to wear blindfolds while attempting to catch the other team’s members, who were tasked with cooking up several simple food and drink items using ingredients and appliances inside the store. However, in order to evade the blindfolded “zombie” team, they had to sneak around as noiselessly as possible while securing their ingredients and cooking their food. 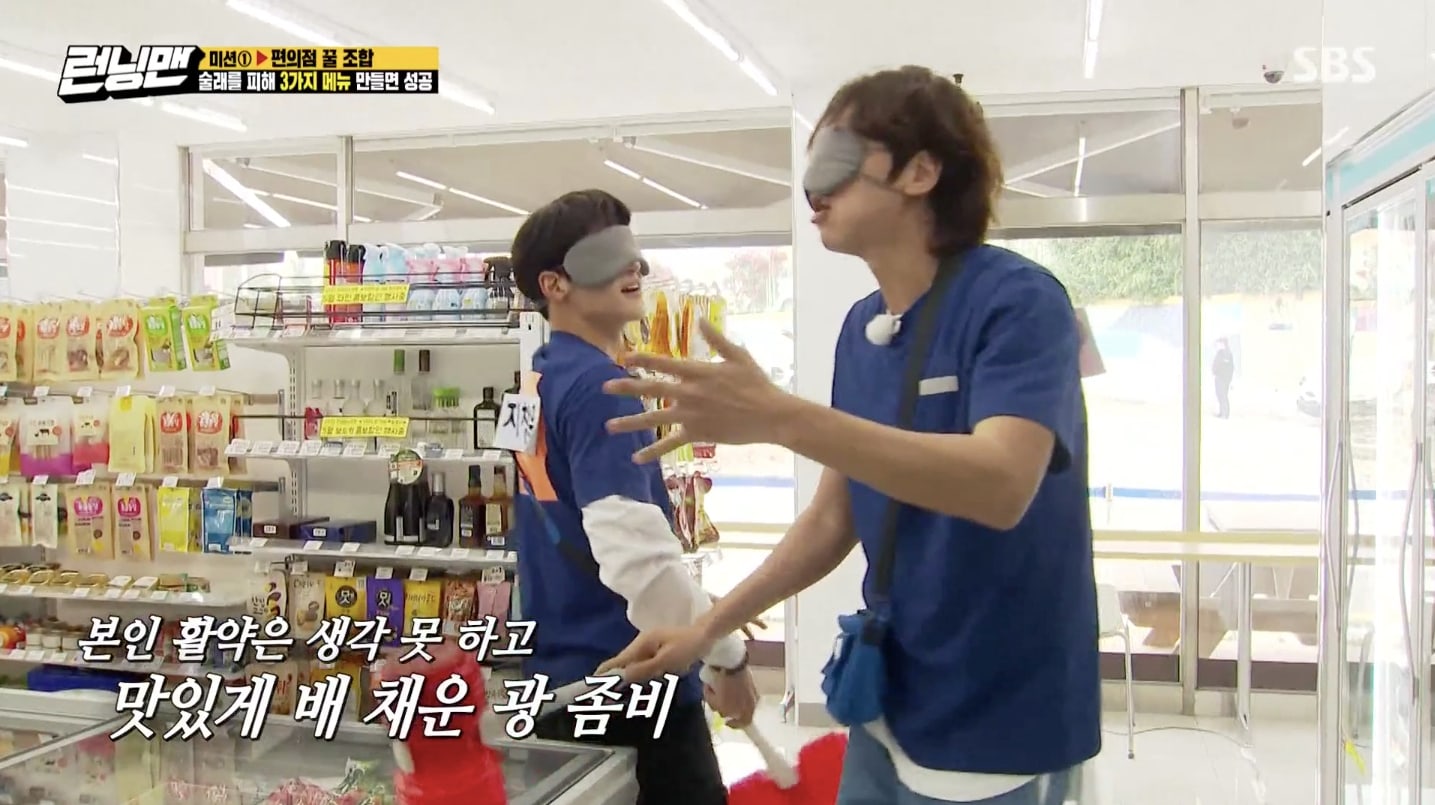 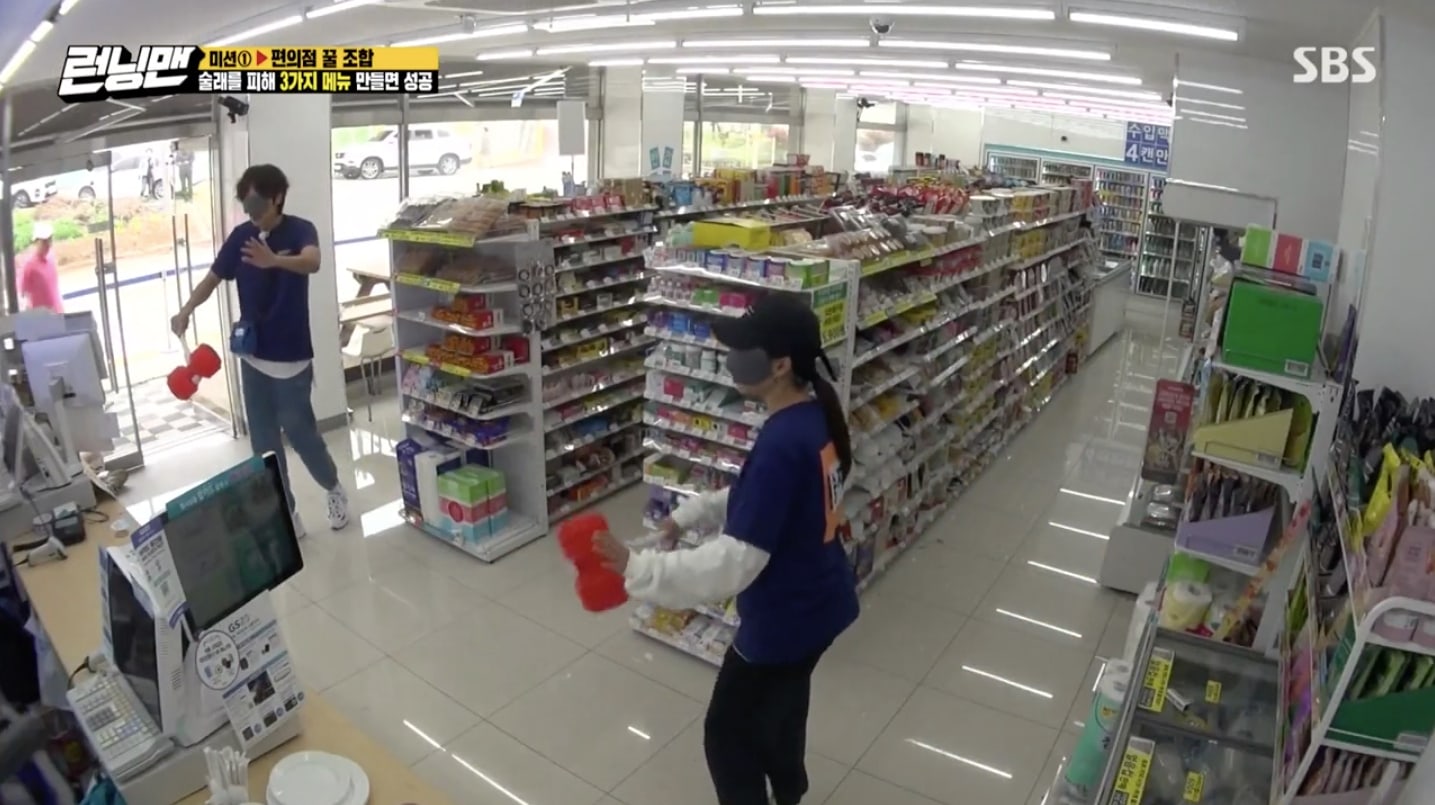 When it was Ji Chang Wook’s team’s turn to wear blindfolds and try to catch the opposing team, both Ji Chang Wook and Lee Kwang Soo cracked everyone up by turning out to be hilariously bad at the game. As they ran around the store waving toy hammers, the two actors completely missed the other team’s members and ended up repeatedly whacking the store’s shelves instead. Hearing the potential for destruction, Song Ji Hyo exclaimed, “Don’t destroy the store!”

Not long afterwards, the two stars heard Yang Se Chan’s footsteps and headed in the same direction to chase him—but ended up accidentally attacking one another instead. 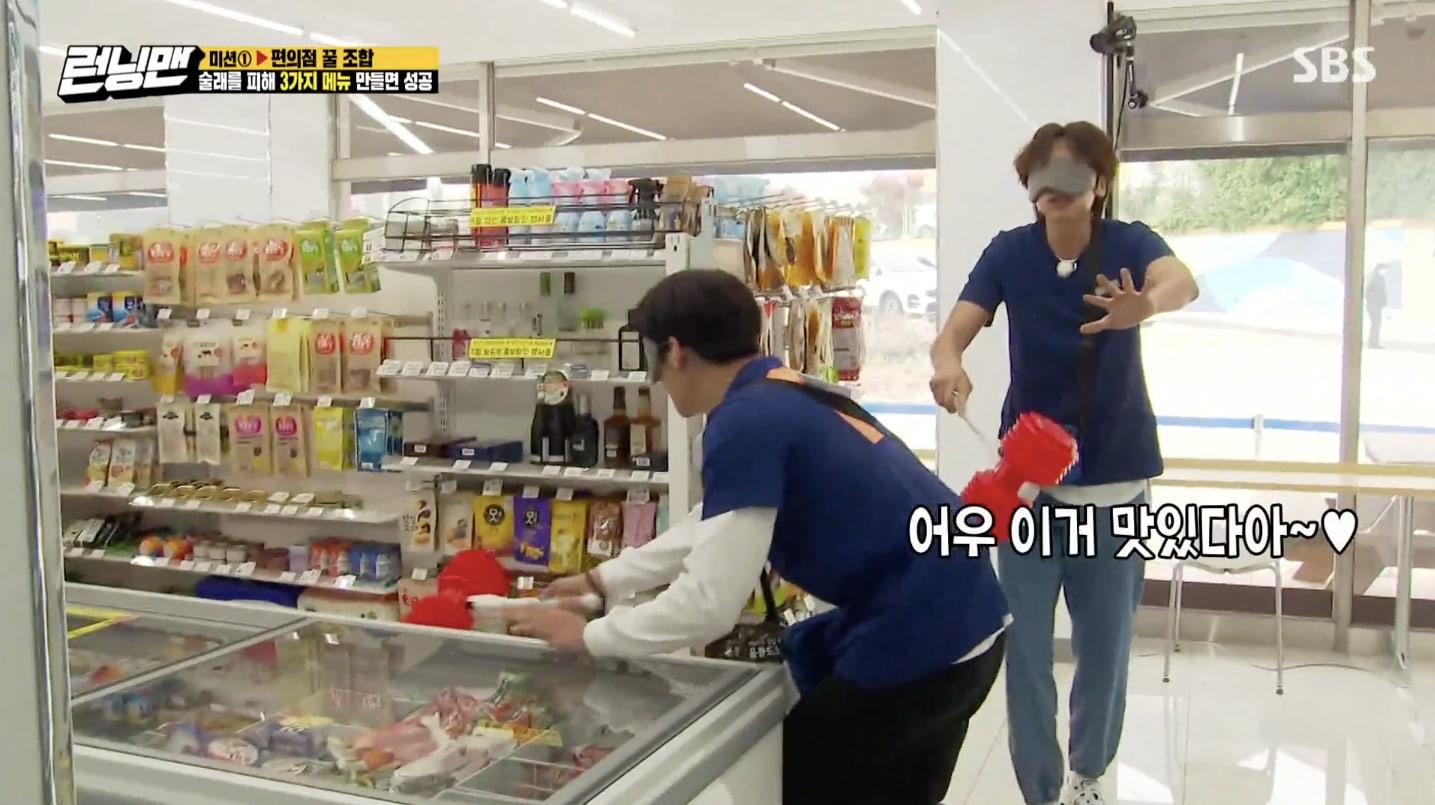 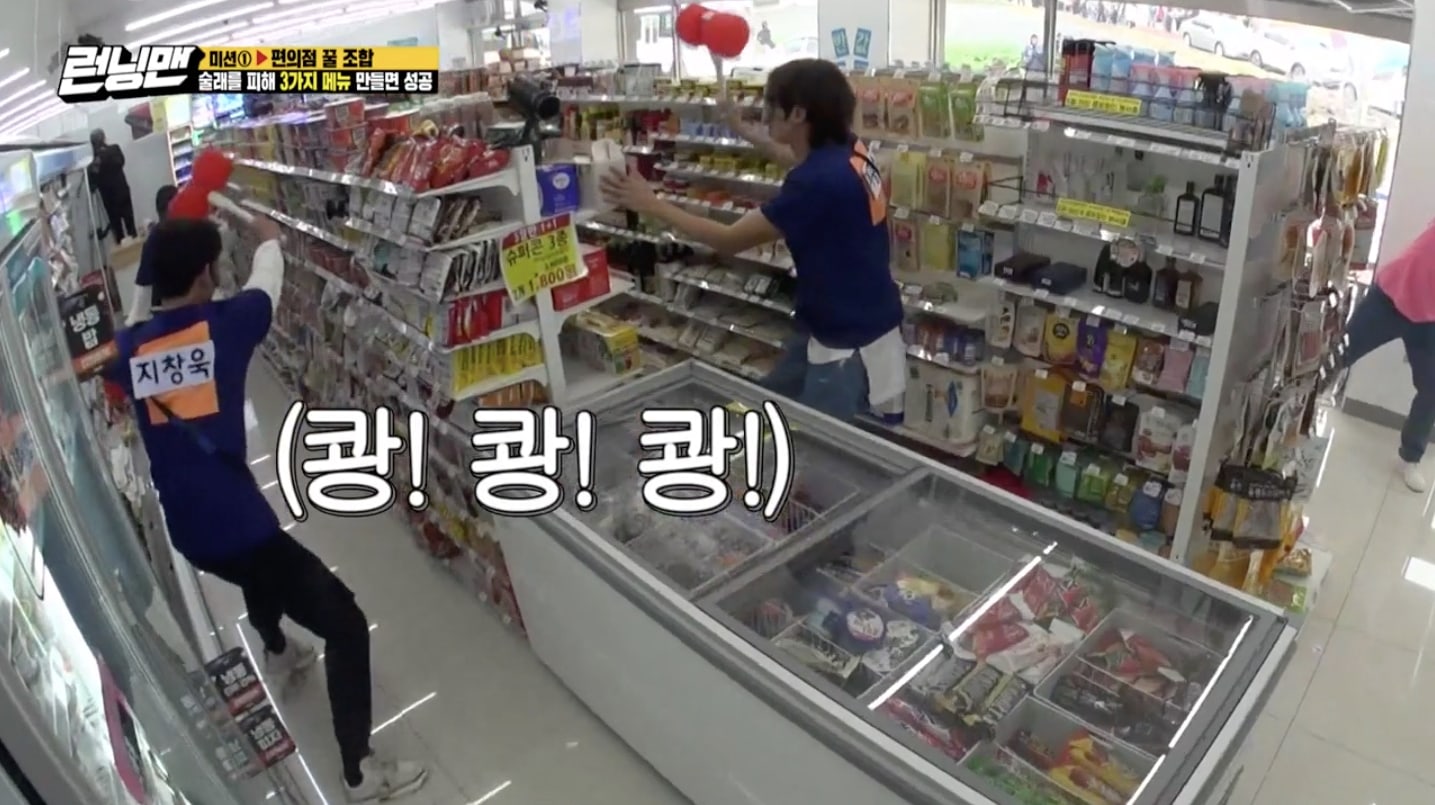 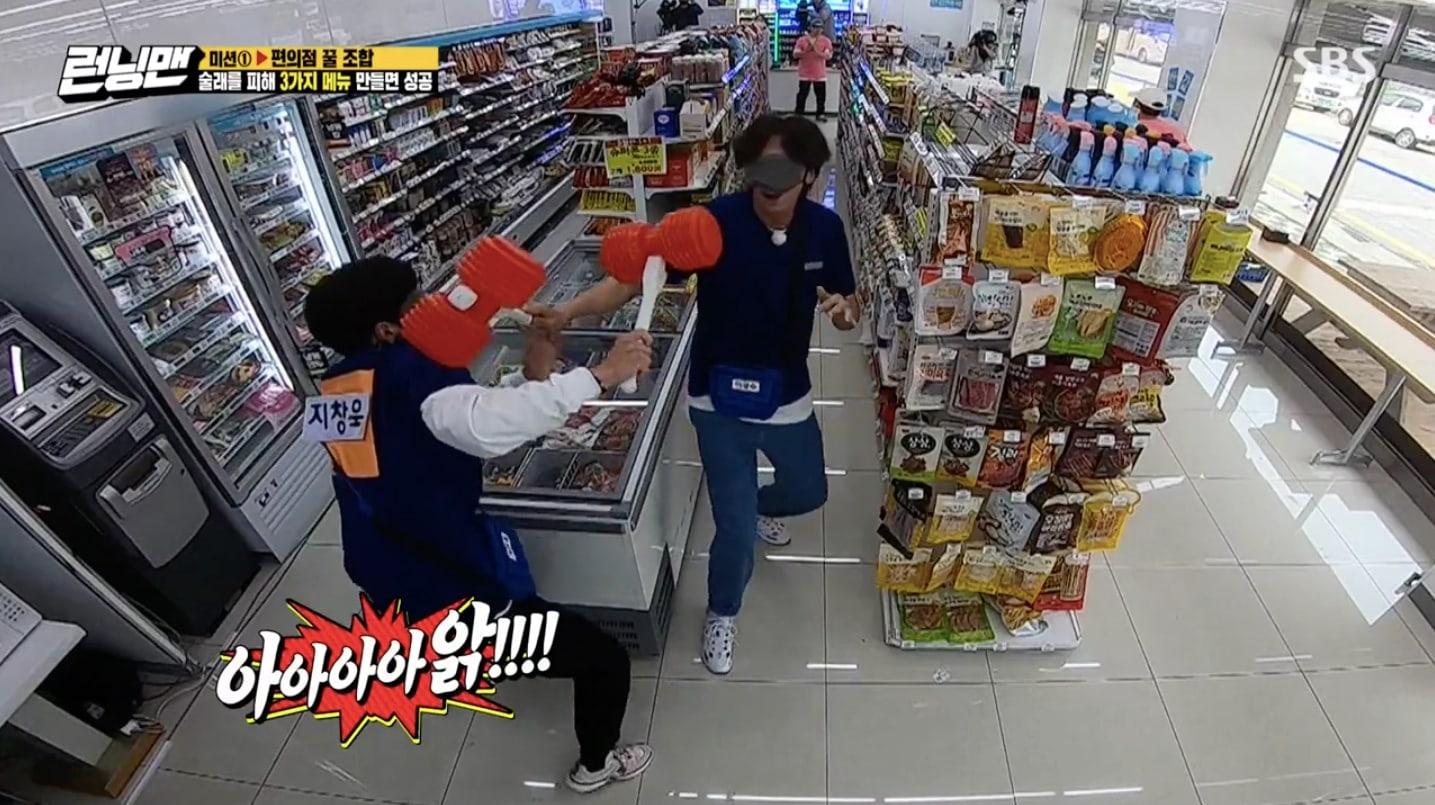 Later, Ji Chang Wook mistook the ice cream freezer for a person and, after getting way too excited over the possibility of catching someone, hurt his leg by walking directly into it. He then attempted to locate the microwave in order to block the other team from using it, but as he sniffed around to find it using his sense of smell, his nose hilariously led him to the ATM instead.

Lee Kwang Soo, on the other hand, managed to successfully locate the microwave, but instead of standing in front of it to catch the other team, he decided to start eating their food by hand instead. After dipping his hand directly into the microwaved rice cakes, he yelled out in pain, “Ouch, this is hot!” However, the searing pain didn’t stop him from continuing to eat the food by hand, even as Song Ji Hyo scolded him for eating instead of focusing on the game.

Check out a brief clip of part of Ji Chang Wook and Lee Kwang Soo’s struggles below!