GOT7’s Jinyoung Talks About Acting With Jeon So Nee In “When My Love Blooms,” Key To Being An Idol And Actor, And More

GOT7’s Jinyoung recently sat down for an interview to talk about his recently concluded drama “When My Love Blooms.”

“When My Love Blooms” tells the story of Han Jae Hyun and Yoon Ji Soo, who were each other’s first loves in college. Yoo Ji Tae and Lee Bo Young play the characters in the present day, while Jinyoung and Jeon So Nee play their younger counterparts.

Jinyoung impressed the viewers with his steady acting as the younger Han Jae Hyun and was especially praised for giving off a similar vibe as Yoo Ji Tae.

First off, the idol-turned-actor commented, “I want to thank everyone who watched the drama. There were moments where I felt shabby next to ‘When My Love Blooms’ and Han Jae Hyun. Would I be able to make just decisions and judgments if I were in that situation? If I had lived in that era, where would I have gone? I became ashamed due to those endless questions.”

He added, “Even if it was a drama, there might have been an ideal I hoped for in the image of Han Jae Hyun, who struggles between reality and justice and goes as his beliefs dictate. I really thank Han Jae Hyun for allowing someone insignificant like me to portray him, and I would like to say thank you to the director and the writer who created him. And I’m grateful to the staff who have been with me for months. Without senior actors and colleagues, Han Jae Hyun would not have been complete. I hope that like the drama title, the moment when life blooms into a flower will always be with you.”

Jinyoung accepted the offer to play Han Jae Hyun because of the drama’s title and script. He explained, “I really wanted to do it when I first saw the script, but in fact, the schedule was not easy because the preparation of our album overlapped with the timing of the drama. But I thought I shouldn’t miss it, so I auditioned for the role. Thankfully, the director picked me and fortunately, the schedule was adjusted well, so I was able to join the project.” 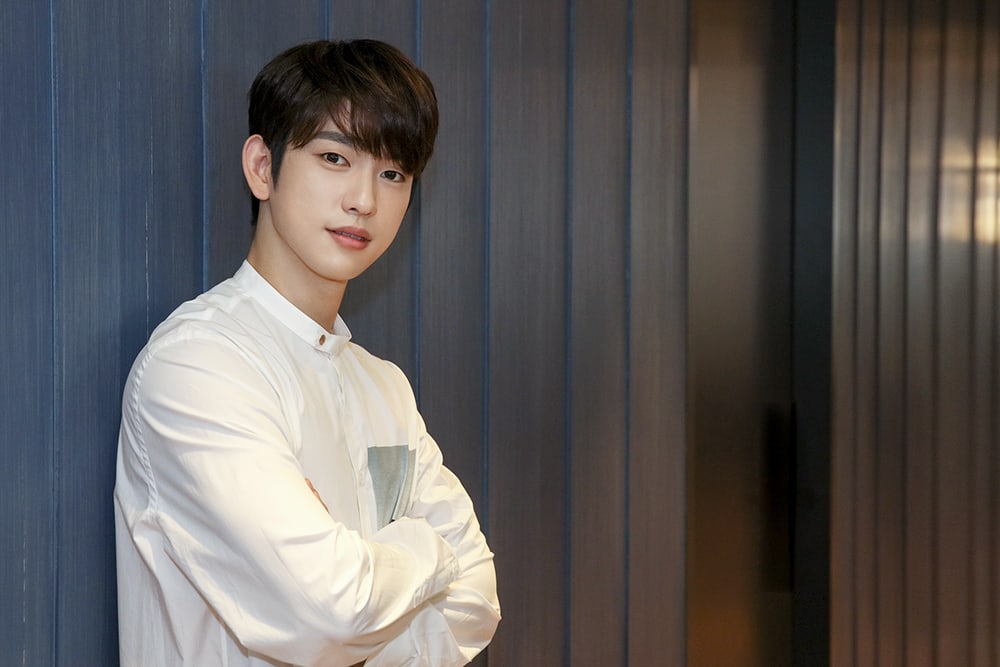 Jinyoung also talked about the pressure of acting as Yoo Ji Tae’s younger counterpart. He said, “It was very burdensome [to act as Yoo Ji Tae’s character in the college years]. He is a senior with an image of dignity just by his name, but playing his youth was a burden because our parts switched back and forth. If I do something wrong, the character’s narrative could collapse, so that aspect was difficult to me.” Then laughing, he added, “Although it was disappointing that our physiques were different, I thought it was an acceptable range of error and accepted the role.”

In particular, Jinyoung had to act against the backdrop of the ’90s. Because it was a time when he didn’t remember much, he improved his understanding by referring to documentaries. He shared, “I watched a documentary about the student movement and met the director and writer separately and had a lot of conversations. I tried to imagine the situation of the times by listening to this and that. And when I went on set, the set and props were so decorated like in the ’90s that it made me think, ‘I’m here in the ’90s.’ Thanks to that, it was not difficult to immerse myself into the project.”

He continued, “And when I saw the interviews of my senior actors, I realized that everyone in the ’90s and now is living in the same world. Even in fantasy genres, there are living people. I think that’s how I looked back at the ’90s.” 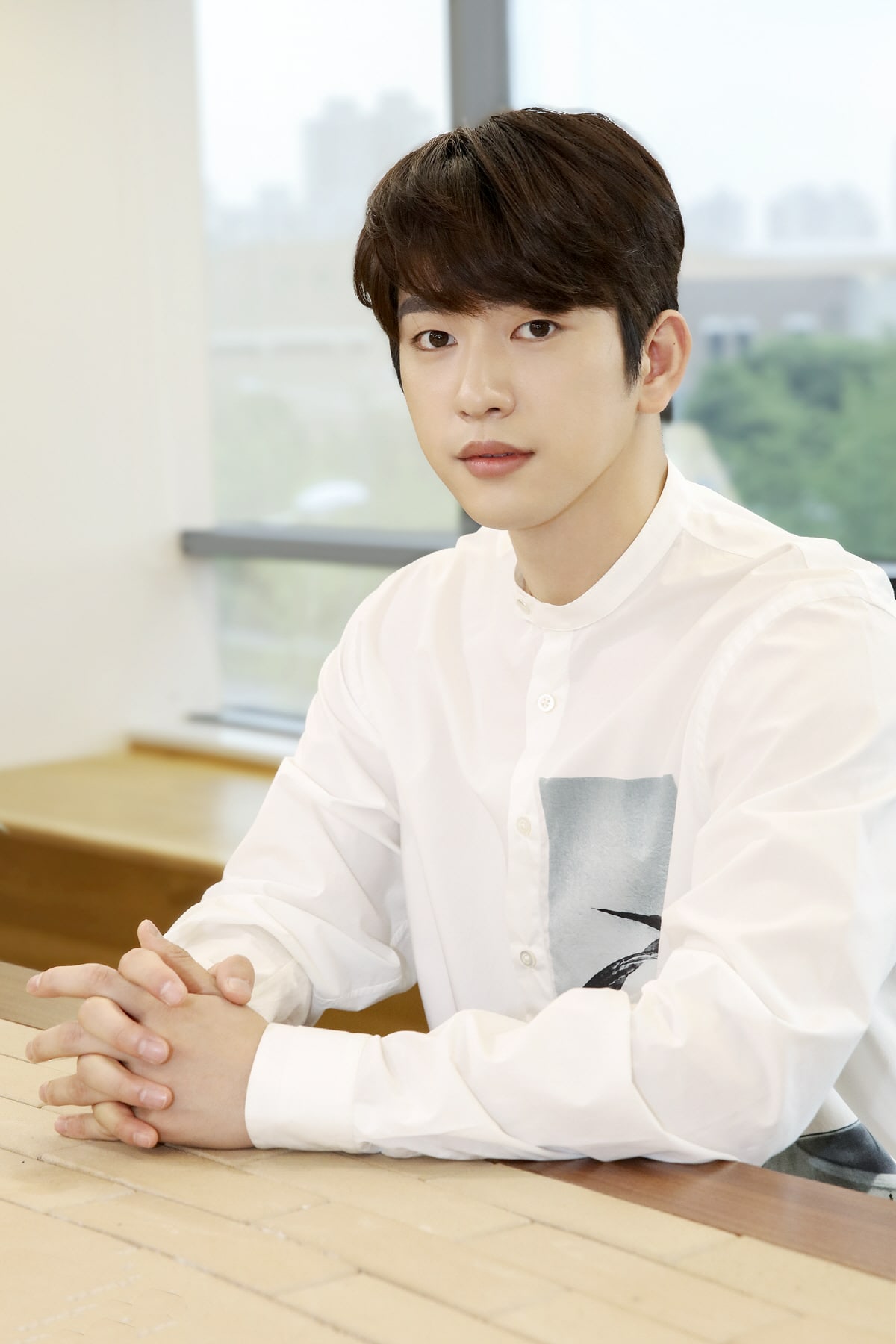 The idol-turned-actor also shared his experience working with Jeon So Nee. He said, “I met actress Jeon So Nee for the first time through this drama, and she is someone like water. Even when I was doing something mechanically, she showed natural and soft acting to fit it all. Thanks to that, I was able to rely on her a lot. I’m a person who goes to the scene with all the little details prepared, so there’s also a limit in expression. Jeon So Nee seemed to do everything according to the flow of the scene without any expressive limitations. I’ve learned a lot about that aspect from her.”

Concerning the scenes where he had to express deep emotions, like affection, he commented, “The phone booth kiss scene was taken without any major bloopers. We discussed a lot about how to make it look beautiful before filming it. In addition to the position of the hands, we also decided in advance how to raise our hands. We also talked a lot about how to express the breathtaking tension between the two people trapped in a small space in the rain before we started shooting.”

Jinyoung also shared that he was very different from Han Jae Hyun when it comes to his love life. Whereas Han Jae Hyun is straightforward, Jinyoung said he’s like a roly-poly. With a chuckle, he explained, “If someone approaches me too straightforwardly, I tend to shrink back. It’s better to have a more natural encounter than to approach straightforwardly.” 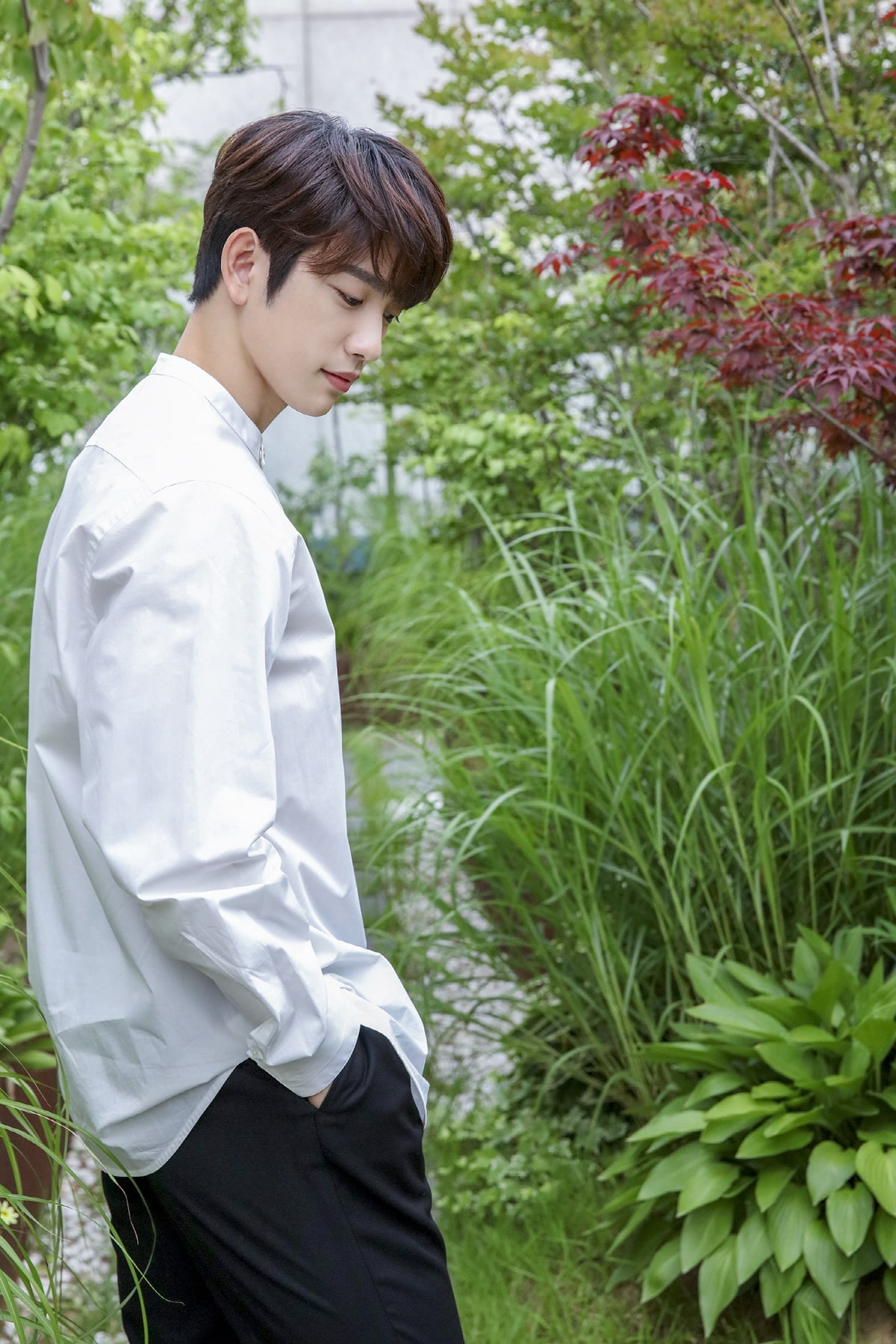 Jinyoung continued to compare himself to Han Jae Hyun, saying, “The way he pushes ahead with his beliefs is 50 percent like me. Even if people don’t know the truth, I push for what I think is right. I can’t stand injustice either, but I try to make a compromise. I’m not different from ordinary people. And I am better at sports than Han Jae Hyun. I want to be similar in terms of how he comforts others. Han Jae Hyun is good at consoling others so that they won’t feel bad.”

While acting as Han Jae Hyun, viewers would refer to him as “handsome senior Jae Hyun.” When asked what he thought about that, he answered, “It feels awkward to hear that I’m handsome. Even before my debut, I thought I should practice dancing and singing harder than others because I am not handsome. But at some point, people started to call me handsome, but I think being handsome is like a wind that comes and goes for a while and can come back but also leave.” 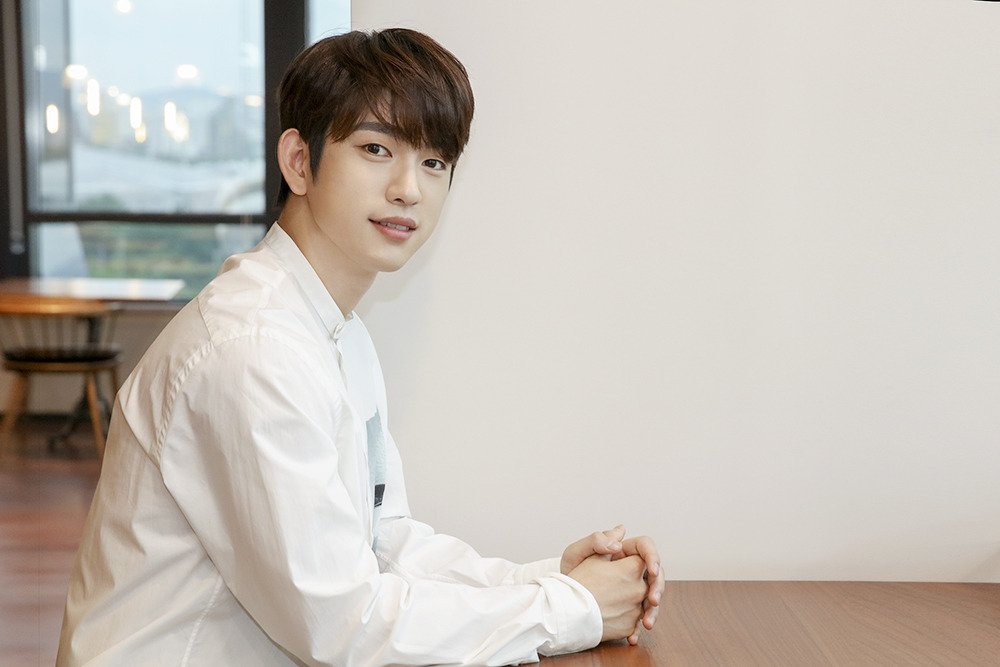 On the reactions of GOT7 members, Jinyoung revealed, “Once I watched with Yugyeom at home while eating together. The other members also all said that they enjoyed watching. Honestly, because we trust that we will all do well on our own, we don’t really give each other detailed feedback. They’re more comments in passing like, ‘I enjoyed watching.'”

He added while laughing, “BamBam didn’t watch the drama but said, ‘Your acting improved.’ He also said that during ‘He is Psychometric,’ and it was a very bittersweet comment.”

Jinyoung also shared his key to success as both an idol and actor. He explained, “It’s sincerity! The entertainment business is also run by people. I believe a person’s sincerity will get through one day. If you act with sincerity, someone will definitely realize [your efforts]. And if there are more and more of those people, I think we can all be active for a long time.”

His next acting project is the movie “Yacha” with Park Hae Soo, Sol Kyung Gu, Lee El, Yang Dong Geun, and Song Jae Rim. He shared, “While preparing for ‘Yacha’, I also went to action school. But as you will see later, I’m not just doing big action that uses my body a lot. In many cases, I use tools rather than my body.”

Then he continued, “I’m amazed and honored to be acting with such great senior actors. It was valuable in itself because it was a time with people I respected. When we were together on set, I always tried to learn at least one new thing. I know it’s obvious, but there was a lot to learn about acting. And I came to admire the attitudes of the senior actors who treated the staff members and younger actors [with respect]. I could see why people call them great actors.”

The final episode of “When My Love Blooms” aired on June 14.