Watch: Kim Soo Hyun And Seo Ye Ji Get Teased By Oh Jung Se Over Their Romantic Poster Shoot For “It’s Okay To Not Be Okay”

“It’s Okay to Not Be Okay” shared a look at how the cast shot their posters!

The poster photos were taken on the drama’s actual set, and the video starts off with Kim Soo Hyun looking around with wide eyes as he takes it all in. He explains to a crew member, “It’s my first time seeing it.”

Seo Ye Ji then walks in looking elegant in a flowery gown, and Kim Soo Hyun remarks on how beautiful she looks but laughs and adds, “I don’t think I could stand close to her.” 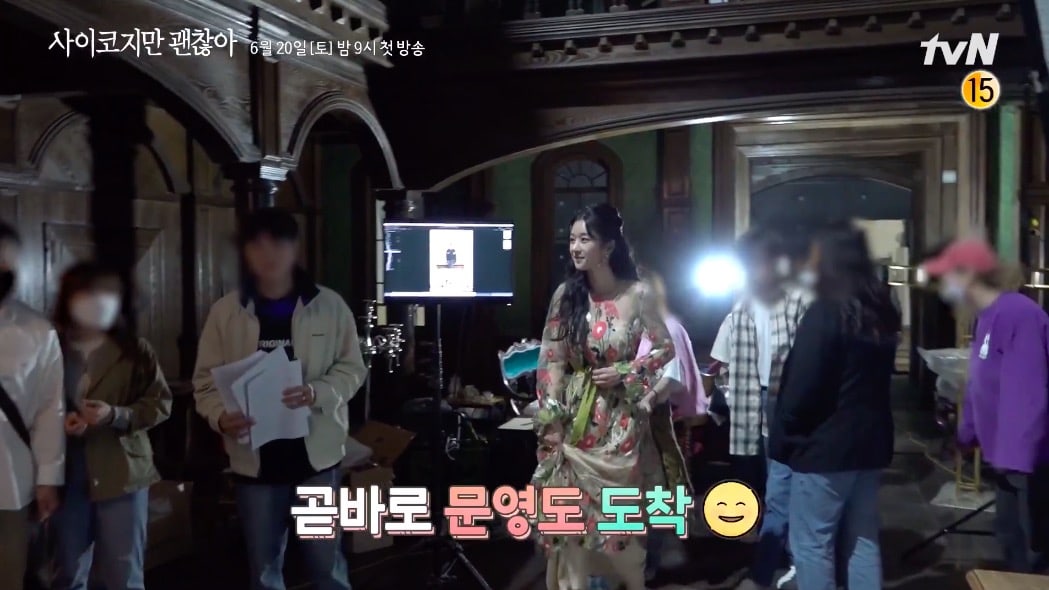 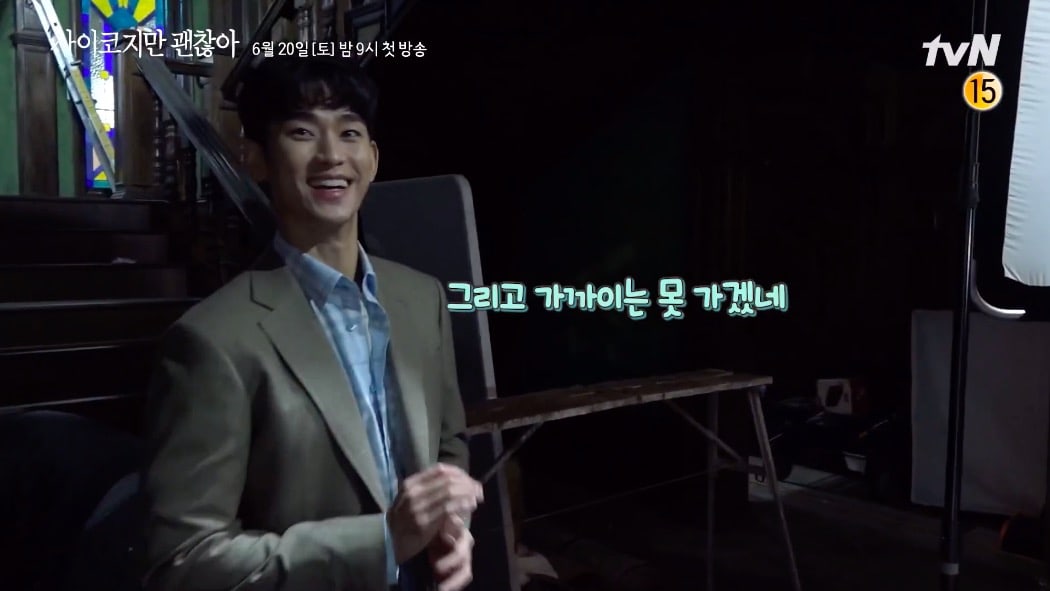 As they talk with the team about the concept for the shoot, Kim Soo Hyun asks if he should stand on her left or right. When told that they can do whatever is most comfortable for them, he makes everyone laugh when he jokes to Seo Ye Ji, “Do you want to be closer or farther away from the light?”

Seo Ye Ji laughs as she sits on the table for their test shot, saying she gets shy about this kind of thing. As they take photos together, Kim Soo Hyun comments, “This is really hard.” Despite the awkwardness of posing with everyone watching them, they pull it off like the pros they are and get some great shots. 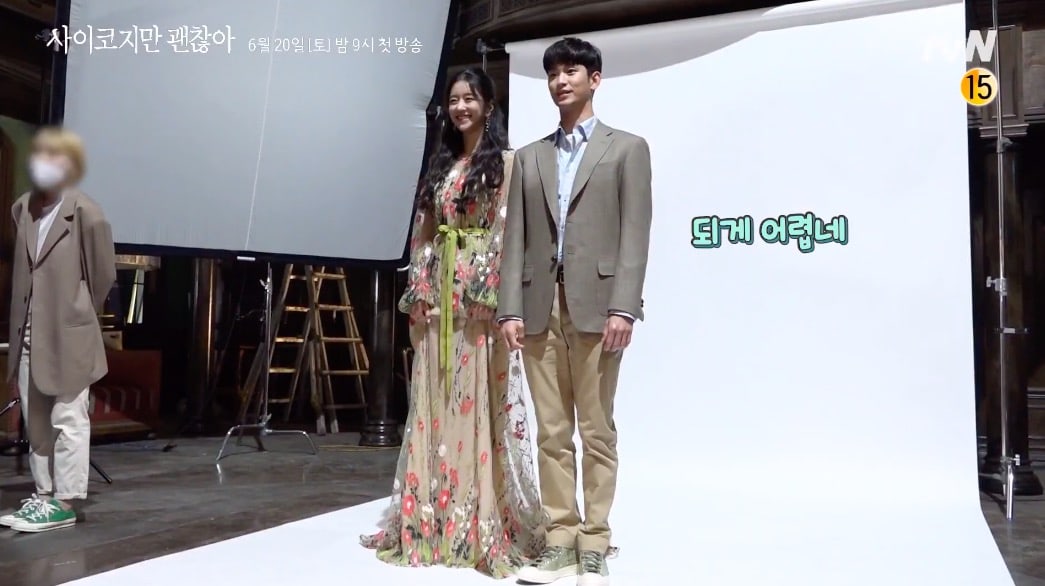 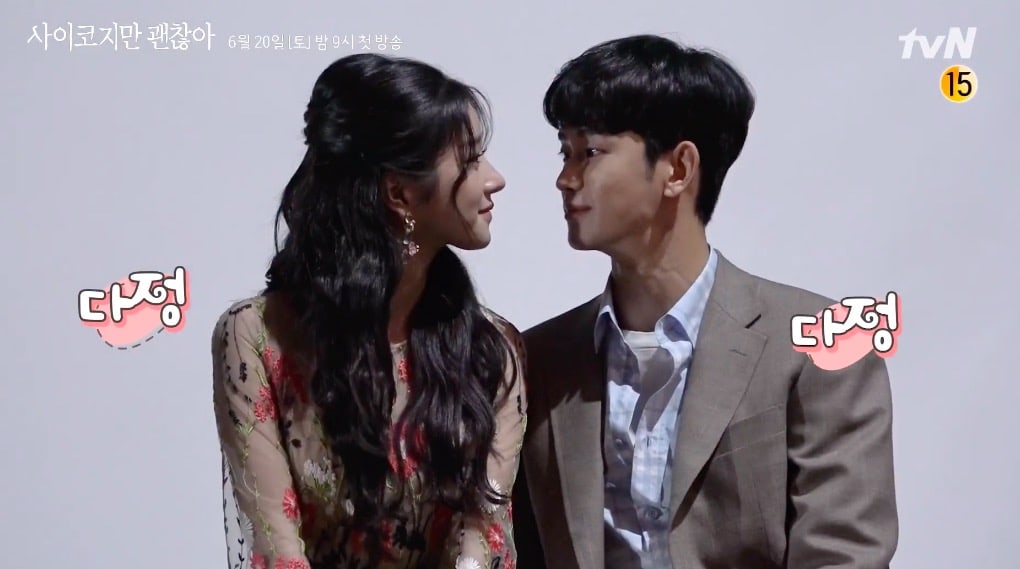 After the two leads take some solo shots as well, Oh Jung Se and Park Gyu Young arrive on set for their own posters. Since Oh Jung Se’s character is an artist, he suggests that he might hold a paint brush during his shot, and it works out well. 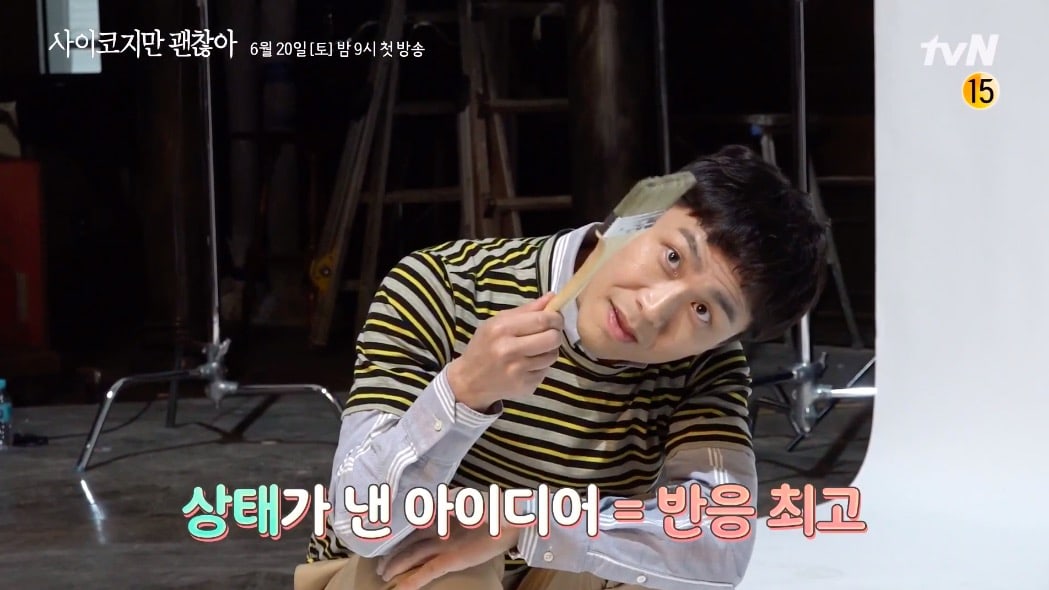 Park Gyu Young surprises people on set when she shows with a laugh how her arms are sticking through large holes in her jacket, rather than in her pockets.

She shares in her interview, “Since we’re doing the poster shoot, it makes me realize that the premiere is almost here already. I’m really excited about it. All the senior actors and staff are working hard, so please look forward to it.” 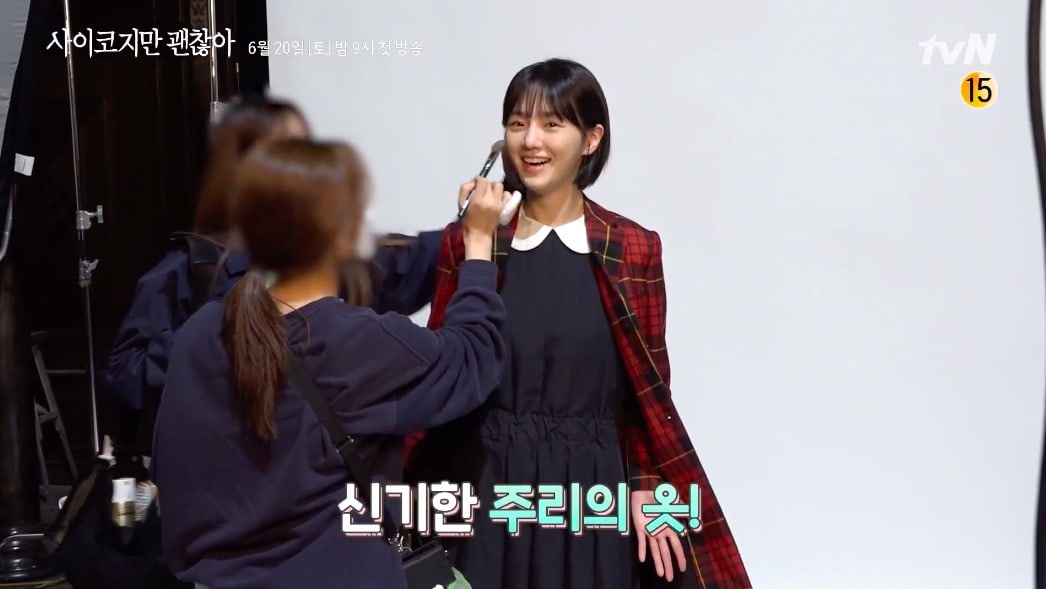 For another shoot, Kim Soo Hyun and Oh Jung Se pose together as brothers for their poster. Kim Soo Hyun playfully tests out a fake log on set by pushing down on it, but he gets told not to by a staff member. He laughs and says, “I got caught.” 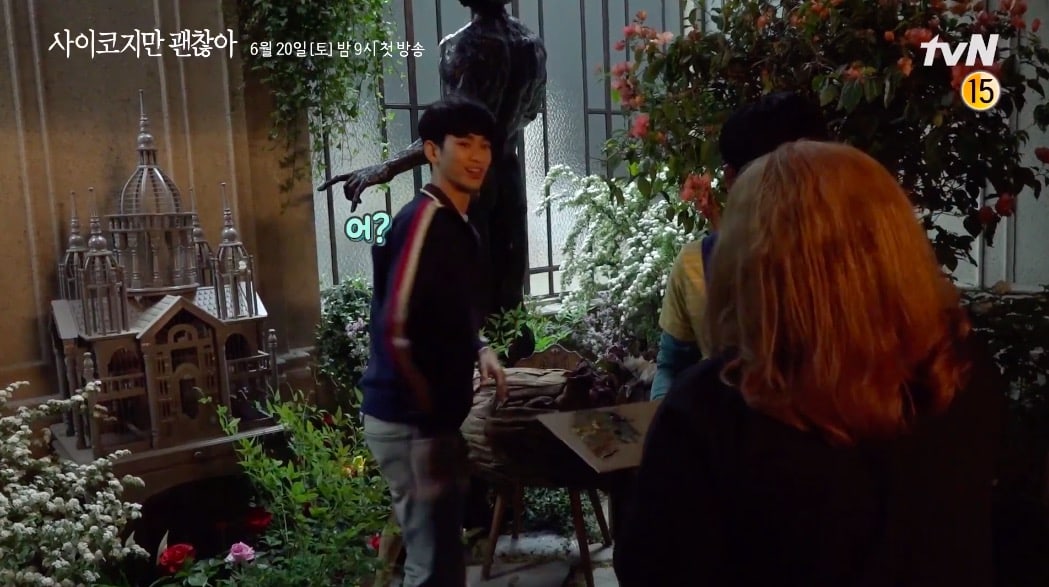 Oh Jung Se says, “The set is so beautiful and they’ve taken such great photos for us. I think the actors have also become more comfortable with each other too, so the photos look more fun and natural. Please look forward to ‘It’s Okay to Not Be Okay’ and support us.” 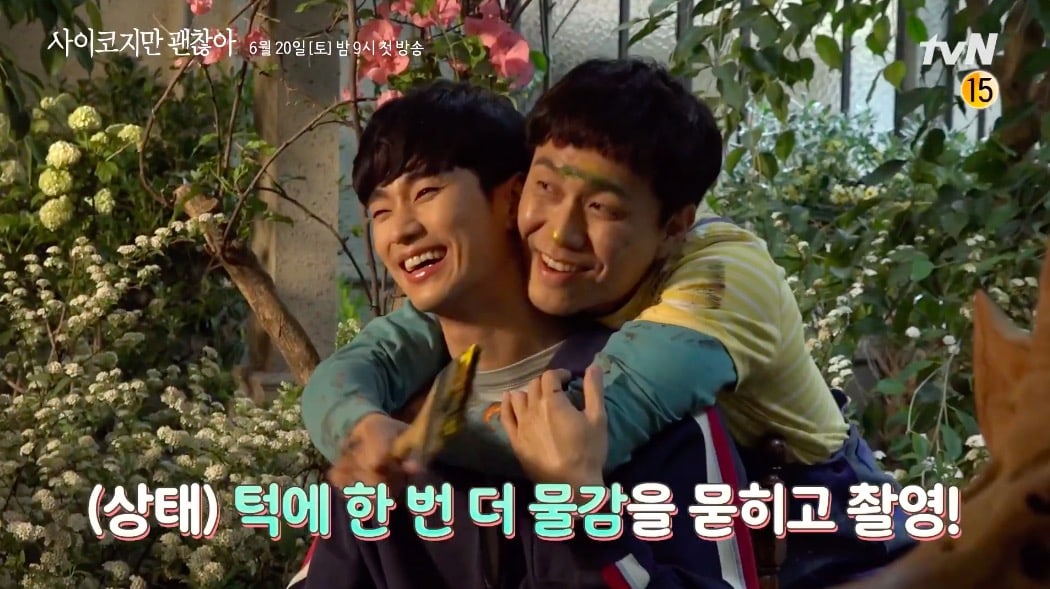 Kim Soo Hyun and Seo Ye Ji then film their stunning character posters together. As the actors sit in an embrace, Kim Soo Hyun tries to figure out where to put his hands and settles on clasping them above Seo Ye Ji’s knee while he looks like he’s trying to hold in a laugh. 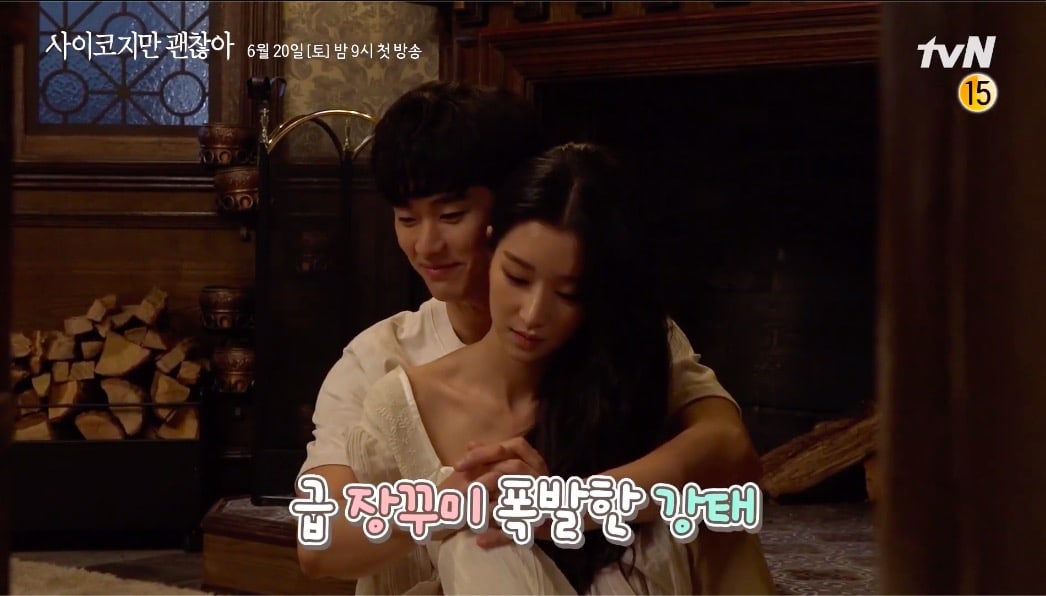 Kim Soo Hyun then looks up in surprise, as Oh Jung Se has shown up on set. Oh Jung Se waves and stares at them, asking the two stars twice, “What are you doing?”, which makes Kim Soo Hyun and Seo Ye Ji laugh.

Seo Ye Ji later looks at the photos and jokes, “What a bad guy!” as she points at Kim Soo Hyun, before saying, “Looks cool.” 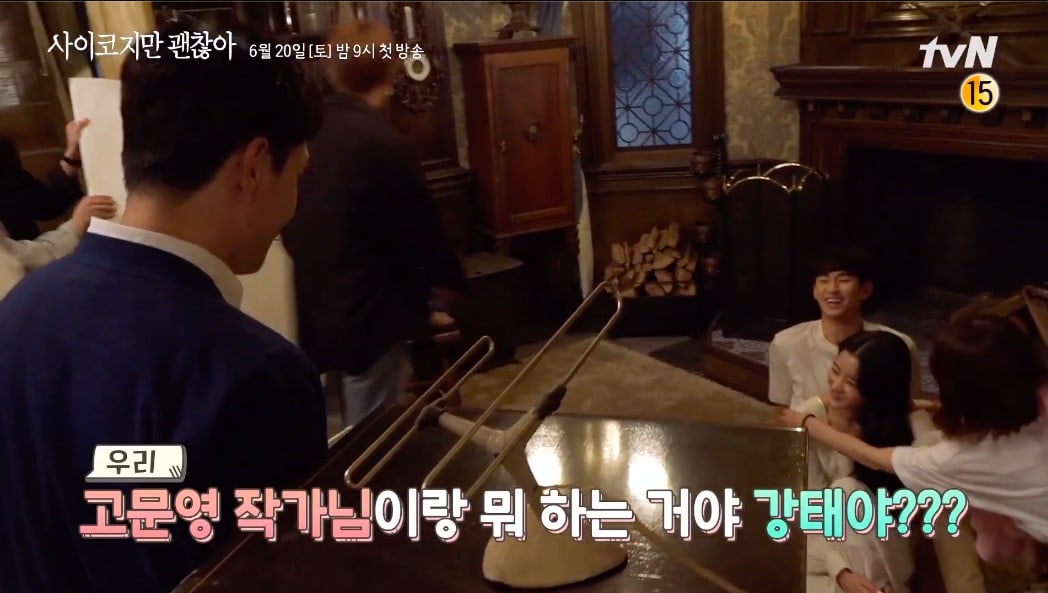 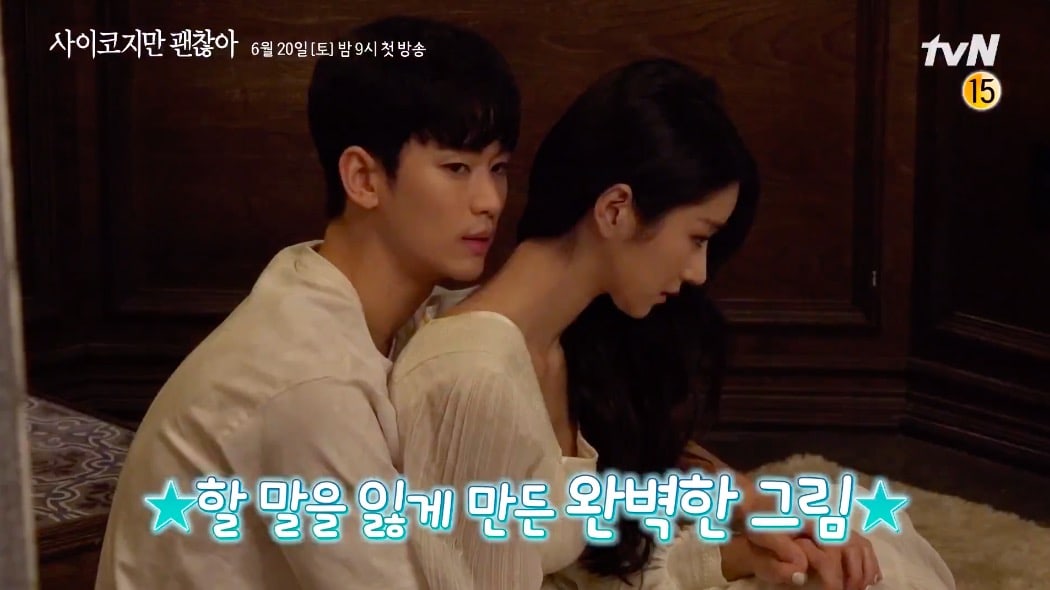