Former Rainbow member Jisook and her boyfriend, Lee Doo Hee, have revealed their plans for marriage!

Jisook and Lee Doo Hee are cast members on the MBC reality program “Don’t Be Jealous,” which documents the love stories and everyday lives of celebrity couples. Lee Doo Hee is a programmer and a businessperson and he and Jisook went public with their relationship in October 2019.

On the June 29 episode of “Don’t Be Jealous,” the last episode of the first season of the show, Lee Doo Hee and Jisook visited Jisook’s mother’s grave. Jisook’s mother passed away from cancer in 2011. Jisook said, “Isn’t this a subtle way to ask for permission?”, but he answered, “There’s nothing subtle about it. This is me being open about it.” 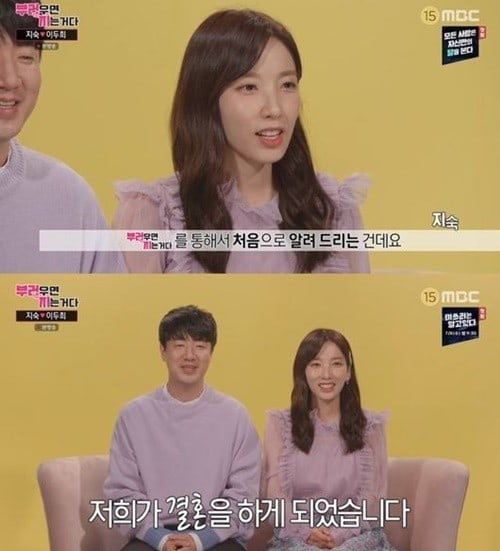 In an interview with the production staff, Jisook and Lee Doo Hee announced that they were getting married. Lee Doo Hee said, “We’ve decided to get married,” and the panelists clapped their hands in excitement.

Jisook continued, “We met each other’s families on Parents’ Day and the topic of marriage came up. We started preparing for marriage since then, but it turns out it isn’t easy.”

Lee Doo Hee said, “The wedding halls are all booked full. Because many couples couldn’t get married in the first half of the year [due to COVID-19], the bookings are all backed up. It’s not something we can leave to fate. Instead of waiting for the right day, whichever date we can get will be the right day.”

Check out an episode of “Don’t Be Jealous” below:

Lee Doo Hee
Rainbow
Jisook
Don't Be Jealous
How does this article make you feel?