On July 14, Song Seung Heon appeared as a guest on the SBS Power FM radio show “Kim Young Chul’s Power FM” to talk about the MBC Monday-Tuesday drama “Dinner Mate,” his true self off set, and more.

The actor shared, “It feels like it started only a couple days ago, but ‘Dinner Mate’ is ending today. We finished filming two weeks ago because of an overseas broadcasting situation.”

Song Seung Heon then mentioned his co-star Seo Ji Hye. “She’s pretty and a good actor,” he said. “She has the biggest and prettiest eyes out of all the actors I’ve worked with. Her eyes are so big that I told her so while we were acting.” He added, “Kim Tae Hee‘s eyes are big too, but Seo Ji Hye’s are bigger.”

Song Seung Heon also talked about his popular 2000 drama “Autumn in My Heart.” He said, “‘Autumn in My Heart’ really feels like it was just yesterday. Not long ago, someone was talking about it, so I looked it up on the internet, and the drama was from September 2000.”

Song Seung Heon credited “Autumn in My Heart,” which once reached an impressive 42 percent viewership, for his success as an actor today. “It’s a drama that’s become a source of motivation for me so that I could be on this radio show right now,” he said. 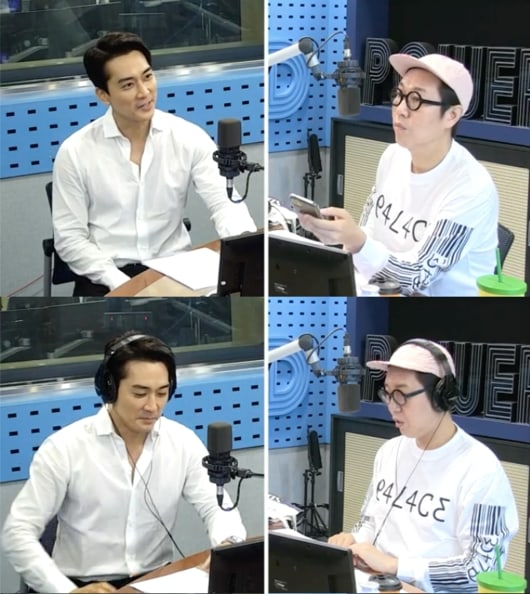 He continued, “The interesting thing was that even then, it wasn’t a time when people overseas knew much about Korean actors. After the drama aired, foreigners came up to my house and my office. That was so fascinating. Before then, I couldn’t even imagine that people would recognize me overseas.” He then chose the scene at the end of the drama where he carried a hurt Song Hye Kyo on his back across the beach as the most memorable.

Song Seung Heon also mentioned his drama “East of Eden,” recalling how he had filmed the drama in Hong Kong. “I didn’t know the weather in Hong Kong was that hot,” he commented.

As for the drama he remembers the most, he named MBC’s “Three Guys and Three Girls,” in which he made his debut. He said, “I had a difficult time, and I was lacking at some points while working on this drama, but I always choose this drama because it is what made me into today’s Song Seung Heon. It’s a drama I worked on for about two to three years.”

Song Seung Heon then talked about how he’s showed off sillier sides to him on MBC’s “Home Alone” (“I Live Alone”). He elaborated on his true self, saying, “Whenever I’m acting out a serious scene during filming, I always have an instinct to mess around.” He added that he tends to be clumsy too, especially with machinery.

Song Seung Heon finally shared that although he is the youngest of three, many people say that he seems like the eldest. He said, “If you get to know me, you’ll think that I do seem like the youngest.”