Former ILUV member Minah has responded to their agency’s claims with her own side of the story.

Minah joined ILUV in November 2019 and promoted with the song “Open the Door” before leaving the group. She recently came forward to accuse former fellow members of ILUV of harassing her, including hitting her, forcing her to take off her clothes, blowing cigarette smoke in her face, and more. She says she is suffering from depression, panic disorder, and insomnia due to the members’ actions and she recently made an attempt to take her own life.

Their agency WKS ENE previously stated that Minah’s claims are all false, saying, “The six members are shocked and hurt by the one-sided and absurd claims,” and they shared plans to take legal action. Minah countered their statement by saying that everyone at the agency had known that she was being harassed by the members.

On July 22, Star News published an interview with Minah that they had conducted the day before. Minah said that she had asked the agency for help during the bullying but they had not listened to her. “I have a recording of our conversation,” she said. “If we go to court, I’ll share it.”

“The agency says they’re going to file a criminal complaint, so I’m waiting for that,” she continued. “They can do that as much as they want. I’m confident.”

“I just at least want to know why they harassed me,” she said. “If they apologize, then I think I’ll feel a bit better even if it doesn’t help completely. But it seems like they have no intention to apologize at all.”

Lastly, she said, “I’m so upset over the unfairness of it that I feel like I’m going to go crazy, and every day seems like hell.” She shared her plans to return to the hospital for treatment for depression, panic disorder, and insomnia.

A representative from ILUV’s agency told Star News, “It’s all false.” They said, “There’s a lot of evidence such as videos and messenger conversations from when the ILUV members were promoting for almost six months. It doesn’t appear at all like she could be called ‘a member who was harassed.'” They added that they would be revealing evidence through the July 22 episode of SBS’s “E-news Exclusive.”

On Instagram, Minah responded by uploading a screenshot of this quote from the article. She wrote, “I haven’t even begun revealing things about the members.. but it seems like it’s time for me to now reveal what the agency CEO did toward me. These members even searched my own phone, what kind of fools would they be to have left evidence in their KakaoTalk? I always had to reply nicely and act like we got along. It seems like you don’t have any evidence about me? You’re not filing a criminal complaint and just talking instead. @wks_nampd.” 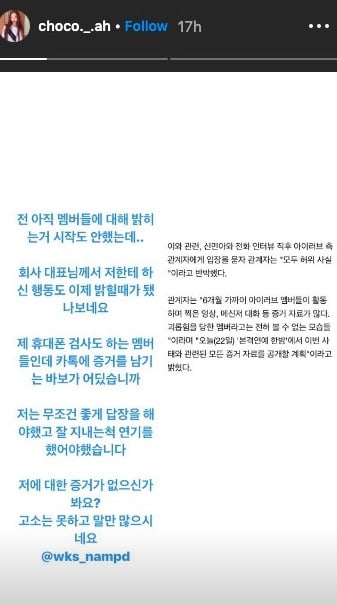 On the July 22 episode of “E-news Exclusive,” a source from the agency told the program, “We’ve looked into this and heard what the other six members had to say. Absolutely no bullying took place. They said that they were always saying every day that they love each other and they said they got along very well. The agency’s looked into it too, so I want to say that this is truly false information.”

A lawyer representing Minah also spoke with “E-news Exclusive,” and he was asked about how the agency had said that there was no harassment. The lawyer replied, “I’ve looked over part of the evidence that Minah has gathered. As a lawyer, I thought, ‘If this went to court, it could be acknowledged.’ Therefore, I think that the agency’s claims aren’t true. It seems like it’s true that she’s been harassed since she was a trainee.”

Three screenshots of messenger conversations were shared on the program, in which Minah and the other members exchange messages. Minah has since responded on Instagram to the way the messages seem to portray the situation. 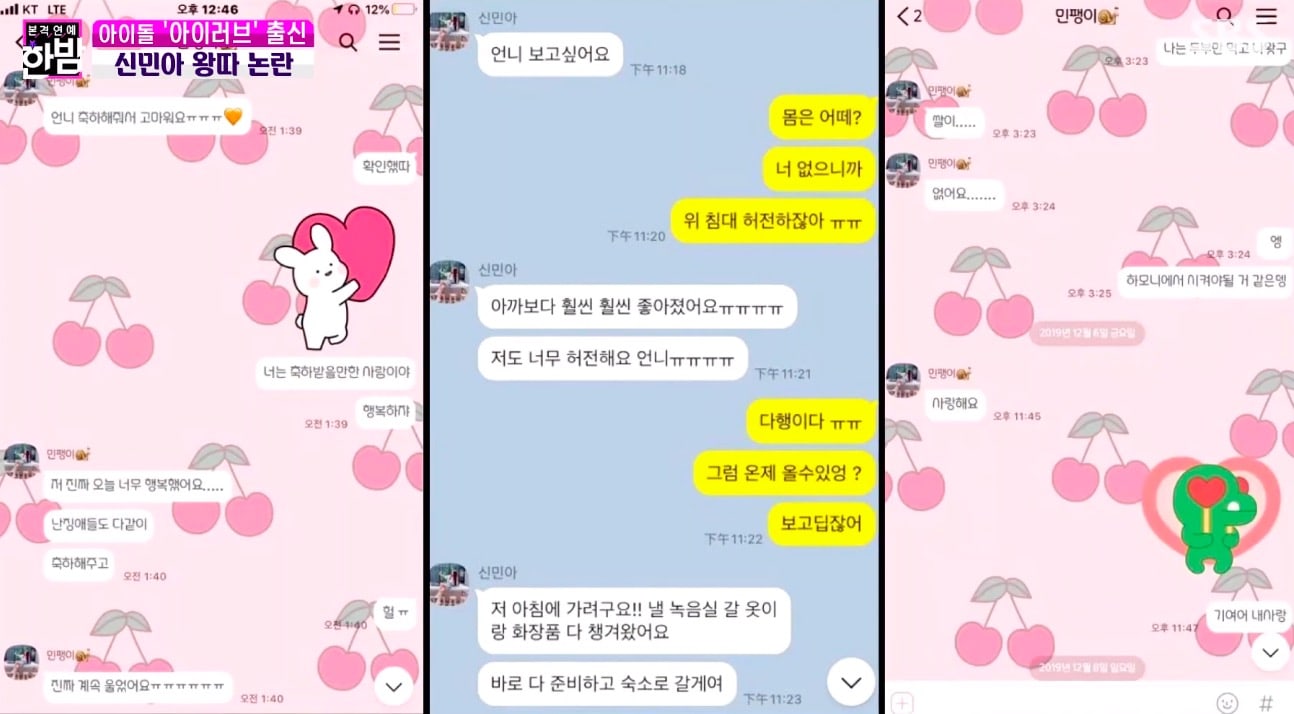 In the first screenshot revealed on the show, Minah thanks a member she refers to as “unnie” (an older female friend) for congratulating her (the word can also be used when wishing someone a happy birthday). The other member says to her, “You’re someone who deserves to be congratulated. Let’s be happy.” Minah replies, “I was really so happy today.”

Minah responded on Instagram by sharing a shot of the same messages and tagging the user “blackbeanjiwon” (one of the ILUV members is named Jiwon).

She wrote, “I saw SBS’s ‘E-news Exclusive’ just now and I’m uploading the originals of the photos that the agency sent as evidence. These messages are from my birthday, August 12, 2019. At the time, I wasn’t living at the dorm and I hadn’t signed a contract either. In short, these messages have absolutely nothing to do with this matter.”

In a second screenshot shared on the show, Minah and the member are first having a discussion about groceries. Further down in the chat window, Minah sends the message on another day, “I love you.” The other member replies with an emoji and writes, “You’re cute, my love.”

Minah responded on Instagram with a screenshot that shows the same messages and tagged the same account as she did on her first post. She wrote, “These messages are from December 6, 2019. I shared a room with this member, and she was always forcing me to do aegyo, recording it, and harassing me.” The word “aegyo” refers to cute gestures, expressions, or behavior.

Minah continued, “She harassed me by making a ‘Minah aegyo compilation’ too. On this day, she was telling me to do aegyo but when I didn’t do it, she got mad so I was calming her down by doing this. Why would I love her? So terrible.”

In a third screenshot revealed on the show, Minah sends a message to another member saying, “I miss you, unnie.” The member replies, “How are you feeling? The top bunk is lonely because you’re not here.”

Minah replies, “I started feeling a lot better earlier. I’m feeling lonely too, unnie.” The other member says, “That’s a relief. When can you come back? I miss you.”

Minah responds, “I’m planning on going in the morning!! I brought all the clothes and makeup I need for the recording studio tomorrow. I’m going to prepare everything and then go to the dorm.”

On Instagram, Minah posted a conversation that is similar to the one in the program but includes some different wording, as well as messages from the other member such as “Come back soon. Until you do, I’ll keep the hostage with me.” Minah tagged an Instagram user named “star_tpjh” whose bio includes the name Jiho.

Minah wrote in her Instagram caption, “These are messages from December 2, 2019. This was the day after this member’s birthday. I’d gone to the emergency room and then gone home because I was feeling very ill. The ‘hostage’ she mentions here is my favorite doll. She would always hide it without telling me and on that day, she took it and called it a ‘hostage.’

“As soon as I got back from the emergency room, she came up on my bed and harassed me by pressing down on me to keep me awake. So I felt worse and went home. I knew what would happen if I didn’t answer her nicely, so I always did so. She was also someone who put together a collection of my aegyo, so I always did what she said.”

Meanwhile, the agency is reportedly preparing to debut the new girl group BOTOPASS in August, which contains some members of ILUV.

Stay tuned for more updates on this story.

E-news Exclusive
Minah (Former ILUV)
How does this article make you feel?