“I-LAND” continued its intense unit performances and introduced the contestants’ fourth mission in the July 24 episode.

On the Mnet show “I-LAND,” the state-of-the-art training center is available for only 12 trainees. The other trainees practice in the “ground” facilities instead, separating the “I-LANDERs” from the “grounders.” Depending on the results of each test, the trainees and producers vote to determine which trainees will move up to I-LAND or down to the “ground.”

In the last episode, the contestants began performing a midterm evaluation, starting with vocal units. The I-LAND vocal unit (Geonu and Heeseung) performed BTS‘s “Butterfly” and the grounder vocal unit (Sunoo and Daniel) performed BTS’s “Save Me.”

On the July 24 episode, the scores for the performances were revealed. The I-LAND unit received 81 points and the grounder unit received 74 points, giving the win to the I-LANDERs. Rain told both groups that they did well and pointed out that with such a small score difference, the dance units could still change the result. 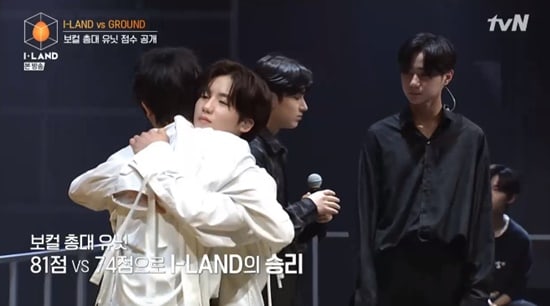 The dance battle began with the grounder unit (Ni-ki, Nicholas, and Jaeho) performing H.O.T’s “Warrior’s Descendant,” X-Teen’s “Reversal,” and G-Dragon’s “One of a Kind.”

They were followed by the I-LANDERs (K, Jungwon, and Sunghoon), who danced to Rain’s “Rainism,” Dynamic Duo’s “Three Dopeboyz,” and G-Dragon’s “One of a Kind.”

Ahead of the performance, the I-LAND team made the difficult decision of switching out member Jay for Sunghoon, as Jay had been having trouble pulling off some of the choreography and Sunghoon’s talents from his figure skating background were an advantage.

In the end, the I-LAND team won with a score of 154 to the grounders’ 139. All the I-LANDERs therefore avoided elimination during this mission, meaning no grounders got to move up to I-LAND either.

The contestants then learned about their fourth mission, “The Final 12.” The trainees have been tasked with performing the new song “I&credible,” with a lot on the line. Six I-LANDERs will move down to the ground after this mission, with three of those eliminated contestants chosen by the I-LANDERs and three chosen by the producers.

The six who are sent down to the ground must join the grounders to await the results of the global vote. The 12 who gain a spot in I-LAND through this mission will be able to enter “Part.2” of the show.

The “I&credible” performance they’re taking on involves 12 contestants, and the I-LANDERs and grounders got to work at dividing up the parts. While the trainees in I-LAND hesitated over the first part because it has so many parts that it could backfire on the contestant, K volunteered for it. Kyungmin also volunteered, but K was chosen by a majority vote. The fifth part, which gives the trainee a chance to stand out through their dance performance, went to Jungwon. Among the grounders, Hanbin took the first part and Ta-ki took the fifth.

Since the contestants are being evaluated individually, there was a different atmosphere during practice, and also many of the contestants struggled with the difficulty of the choreography. In the ground where Rain criticized the contestants for not stepping up as leaders, Ni-ki shared that he wanted to both focus on himself and also help out his team. In the end, he brought the members together and told them he’d help with their formations and details.

While the performances of “I&credible” haven’t yet aired, the show revealed that the producer’s first eliminated trainee is Seon.

As of July 25 at midnight KST, the global vote has now opened.