The July 31 episode of Mnet’s “I-LAND” featured the contestants taking on their final test for part one of the show.

The trainees were tasked with performing the original song “I&credible” in order to show off their individual skills. I-LANDERs would be voted out of I-LAND (three by the producers and three by the I-LANDERs themselves) and send to the “ground” facilities. All the contestants in the ground would then wait to find out the results of global voting, which will determine the six grounders that will be saved and join the remaining six I-LANDERs in part two of the show.

Earlier on July 31, “I-LAND” shared a look at the global voting as of 12 p.m. KST, after fans were asked to select the top six contestants they want to see make it to part two of the show.

Viewers from 171 regions participated, and they revealed that Ni-ki was the contestant with the most votes in Japan, Daniel was the top in the United States, Hanbin in Vietnam, Sunoo in Mexico, Sunghoon in China, Jake in Australia, Jay in Nepal, K in Greece, and Heeseung in India.

In addition, the show shared the top five countries taking part in voting, with Indonesia in the lead, followed by Japan, the Philippines, the United States, and Korea. 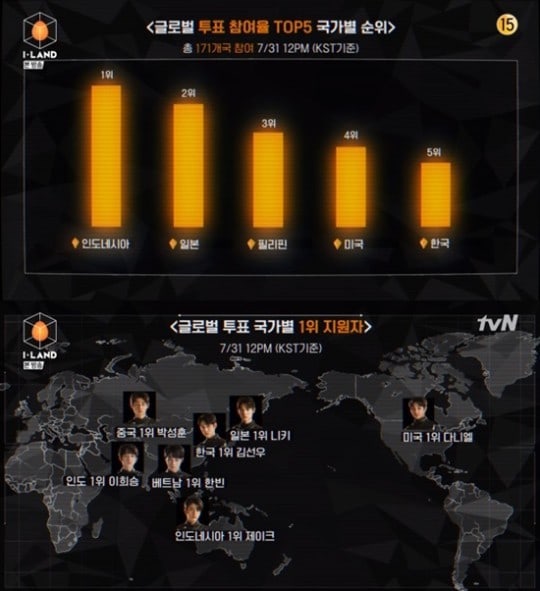 The July 31 episode showcased the I-LANDERs performing “I&credible.” Check it out below!

It was revealed in last week’s episode that the first I-LANDer eliminated and sent to the ground was Seon.

It was then shared in the July 31 episode that the three eliminated contestants based on I-LANDER votes were Youngbin with 11 votes, Kyungmin with 11 votes, and Jaebeom with 10 votes. The producers chose to send EJ, Seon, and Geonu to the ground as well.

Those contestants joined the grounders, who rearranged their part distribution with the new additions. The 16 grounders then performed “I&credible.”

Global voting takes place until noon KST on August 2 and will determine the final 12 who will move on to part two.

Vote for your favorite trainees here, and watch “I-LAND” on Viki below: