On the August 1 episode, MBC’s “How Do You Play?” shared the behind-the-scenes look at SSAK3’s debut performance on “Music Core.”

SSAK3 performed their songs “In Summer” and “Beach Again” on the July 25 broadcast of “Music Core,” which went on to triple the music show’s viewership ratings from last week. SSAK3 also recently won the most recent episode of “Music Core” with their song “Beach Again,” which has been sweeping the charts. 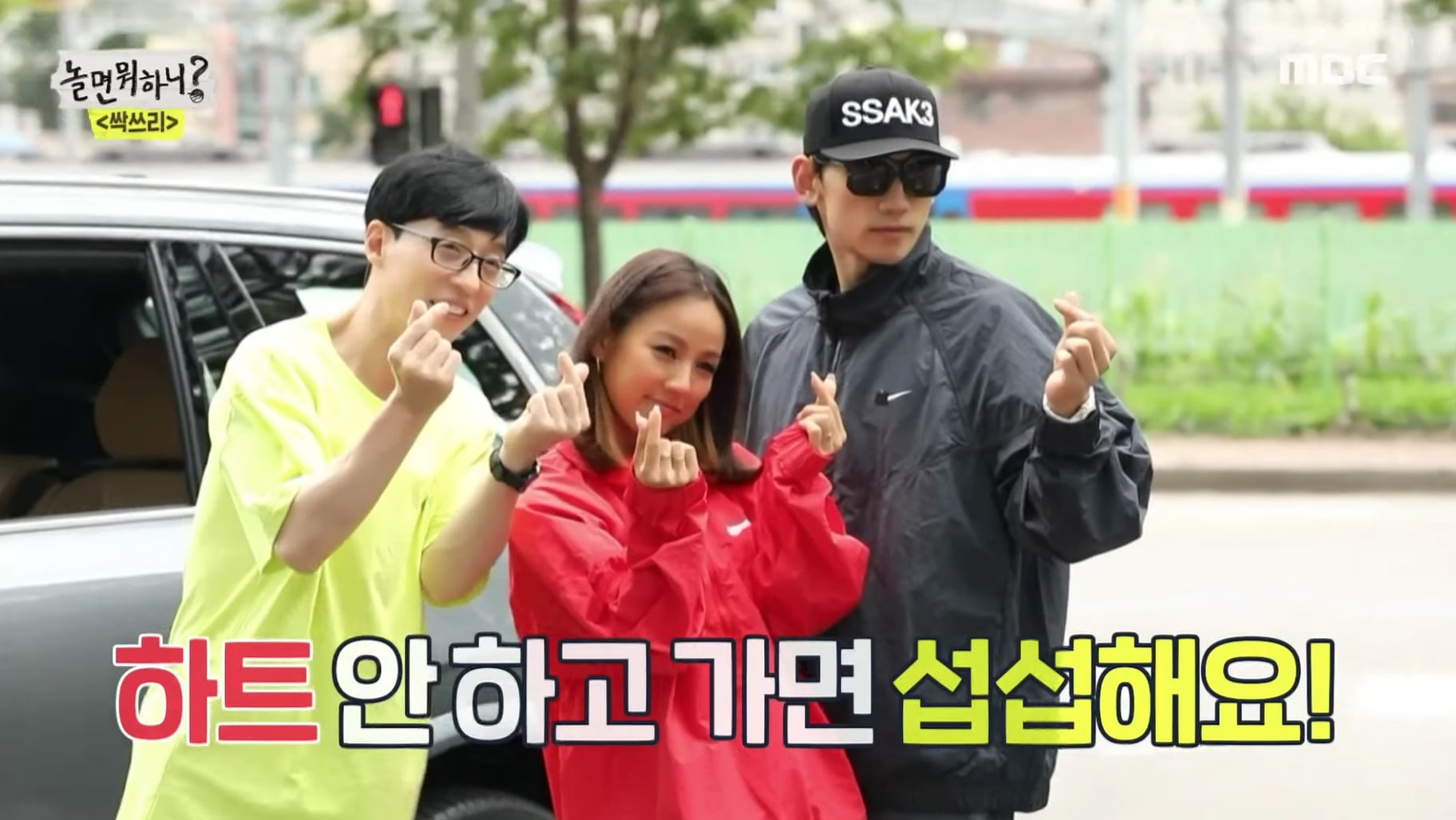 During the “How Do You Play?” episode, the members discussed what to do when they met their fellow artists. Yoo Jae Suk said, “We can exchange greetings if we happen to meet, but let’s not visit each other’s dressing rooms.” But Lee Hyori and Rain, who had more experience in the music world, said, “As new artists, we have to visit the other artists.”

Rain quipped, “I think they’ll wet their pants when they see Lee Hyori though.” Lee Hyori protested that she is not the type to be strict with her juniors, but Rain said, “Your expression is scary. I had a dream of you last night. I could’ve slept well for another 30 minutes, but as soon as I saw your face, I woke up right away. I thought of how much you would have to say if I was late.” 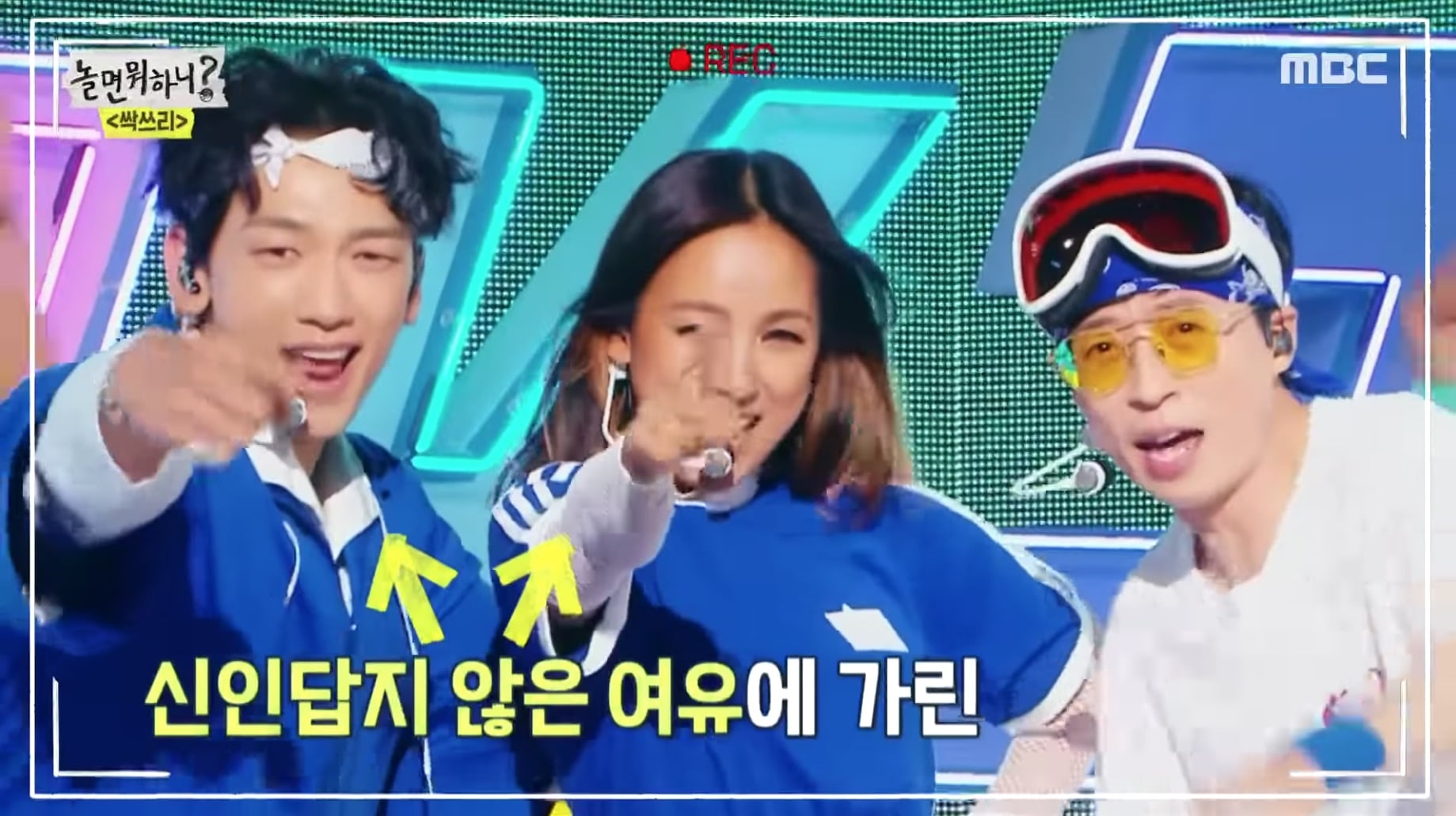 Yoo Jae Suk and Lee Hyori continued to tease Rain about his viral hit, “Gang,” which was recently parodied in Kim Tae Hee’s commercial. Rain joked, “The commercial parodied the music video for ‘Gang.’ I am thinking of whether to take legal action.” Lee Hyori and Yoo Jae Suk jumped on him immediately, asking, “Why would you take legal action against your wife?” Rain said, “I’m not saying that. This is how news headlines are born.” He also added, “My wife didn’t even notice that it was a parody.”

As the SSAK3 members got their hair and makeup done, they were informed that their song “In Summer” was nominated for first place on “Music Core.” The members got nervous upon hearing this news, but when they were told they were going up against BLACKPINK’s “How You Like That” and MAMAMOO’s Hwasa’s “Maria,” Rain shook his head and said, “Well, then that’s over.”

While eating a late lunch in their dressing room, the SSAK3 members were surprised by the appearance of Red Velvet – Irene & Seulgi and Somi. Somi was astonished to see the food and said, “I’ve never seen so much meat [steak and ribs] on a music show before.” Lee Hyori said, “We’re a new group, but we have some money.” 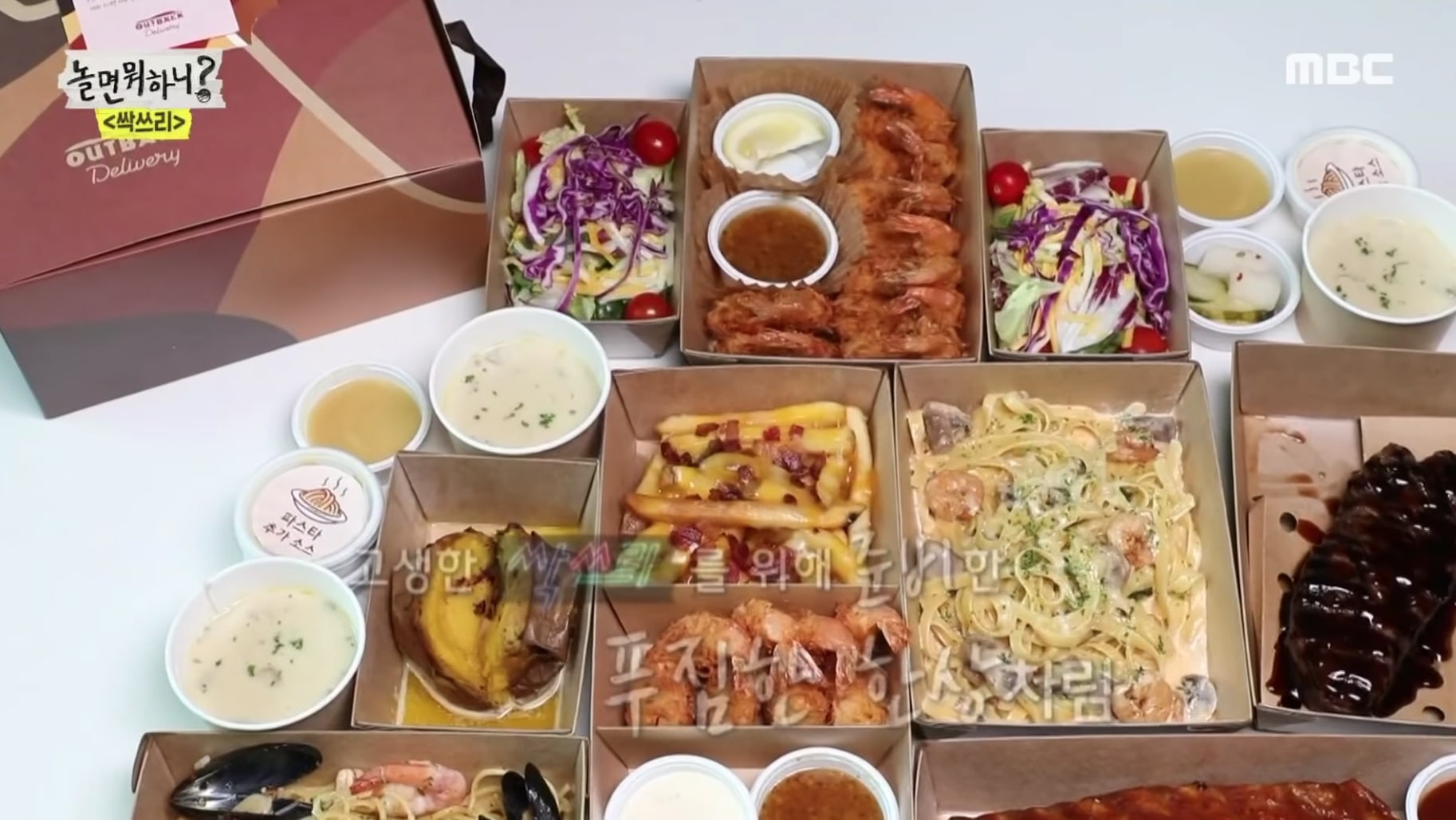 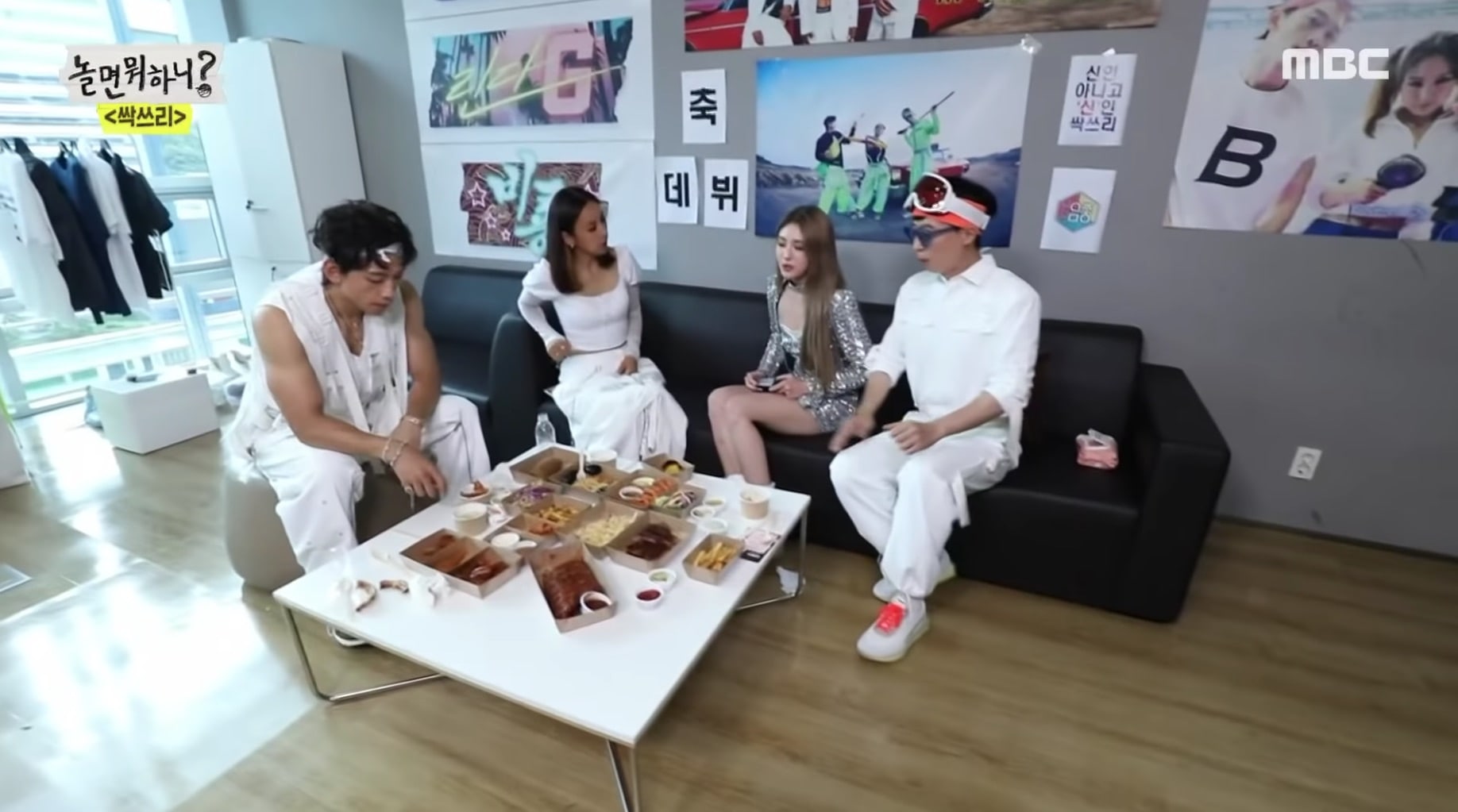 Somi was asked what she did between the pre-recording, which usually takes place in the morning, and the live broadcast, which takes place in the afternoon. “I live near here, so I went home and slept,” she said. She added, “This is something I can do because I’m a solo artist now. Groups have to stay together in the dressing room until the broadcast.” Lee Hyori quipped, “That’s why they get into fights.”

When Irene and Seulgi came in, Lee Hyori said, “Why do the seniors keep coming here? We should be visiting them.” Asked what they’d been doing, Irene and Seulgi answered that they had had other work events scheduled between their pre-recording and the upcoming live broadcast. The SSAK3 members also praised Irene & Seulgi’s “Monster” performance. 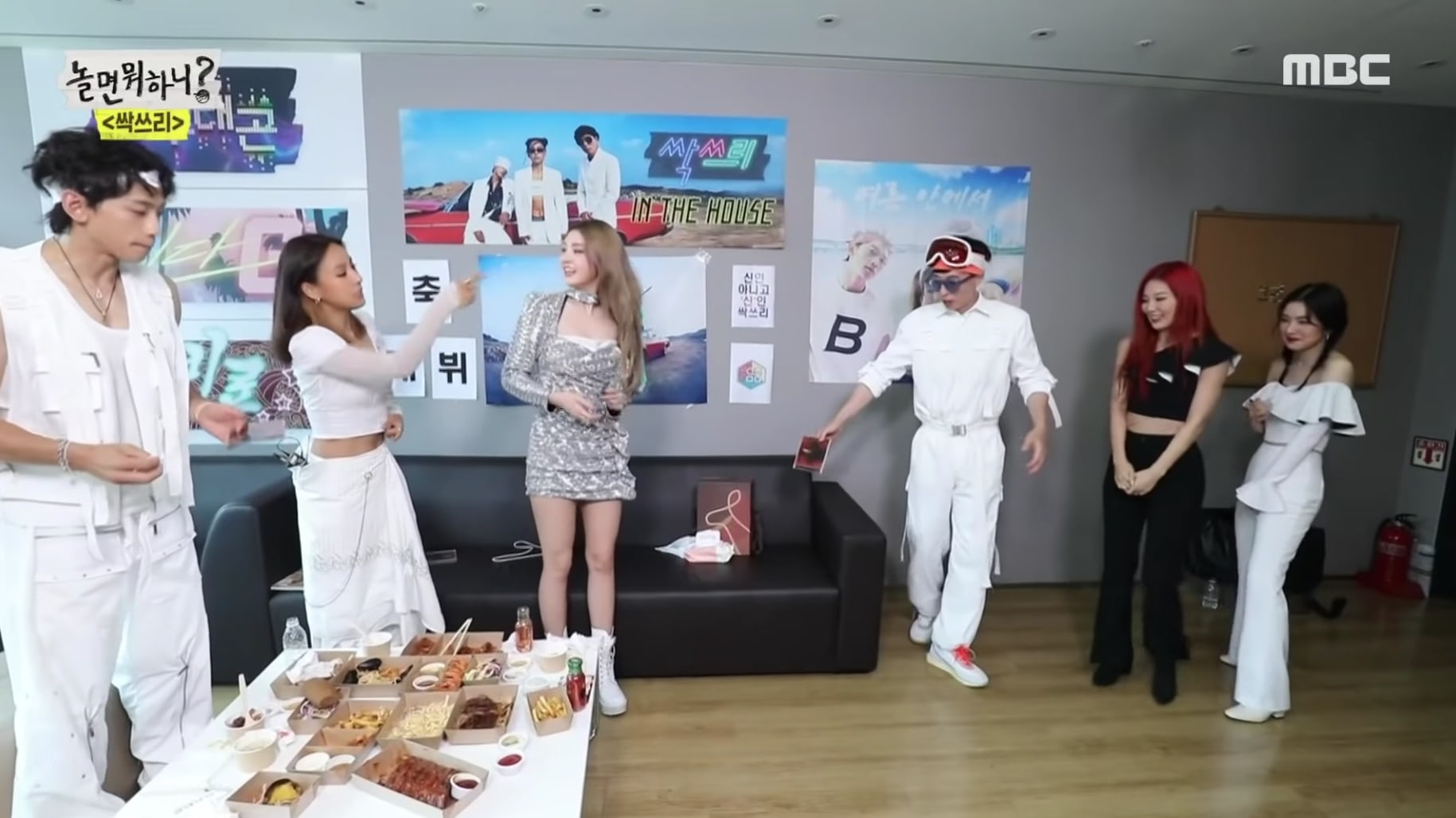 The rest of the “How Do You Play?” episode focused on the online fan meeting that SSAK3 held. Asked by a fan which of their b-side tracks they thought would perform the best, Lee Hyori picked Rain’s solo track. “It’s because it features MAMAMOO,” she said, and Rain complained, “This is too much. Can’t you be on my side for once?”

Somi
How Do You Play?
SSAK3
Red Velvet - Irene &amp; Seulgi
How does this article make you feel?