On August 3, a showcase for (G)I-DLE’s upcoming single “DUMDi DUMDi” took place, and the members shared their goals for the comeback, how they prepared for their return, and more.

Soyeon shared that she felt confident and was in a good mood today, while Yuqi expressed her excitement and how she couldn’t wait for the song to be released.

(G)I-DLE then discussed their first solo concert “I-LAND: WHO AM I,” which took place online last month. The members each had solo stages, and they were all content with how it had turned out. Soyeon said, “I want to give myself five out of five points. There were a lot of things I wanted to show when I was a trainee, and there’s a limit when it comes to music show performances. I was so glad that I was finally able to showcase a type of stage that I can perform well.” Yuqi went on to say about her own stage, “Five points are not enough. If you see the performance, you’ll be able to see my many diverse sides. The public doesn’t know what position I am in the group, but I’m a vocalist. I was able to show my skills as a vocalist for the first time.” Shuhua even said, “I want to give myself five points too. My stage was very beautiful. When I looked at the monitor, I almost fell in love with myself,” making her groupmates laugh.

Minnie also said, “It was unfortunate that we couldn’t directly meet our Neverland ((G)I-DLE)’s fandom name) even though it was our first concert, but our fans cheered us on a lot through the live comments. I was surprised when Neverland’s fan chant came on during our final ‘LATATA‘ stage. I almost cried because I was so moved.” 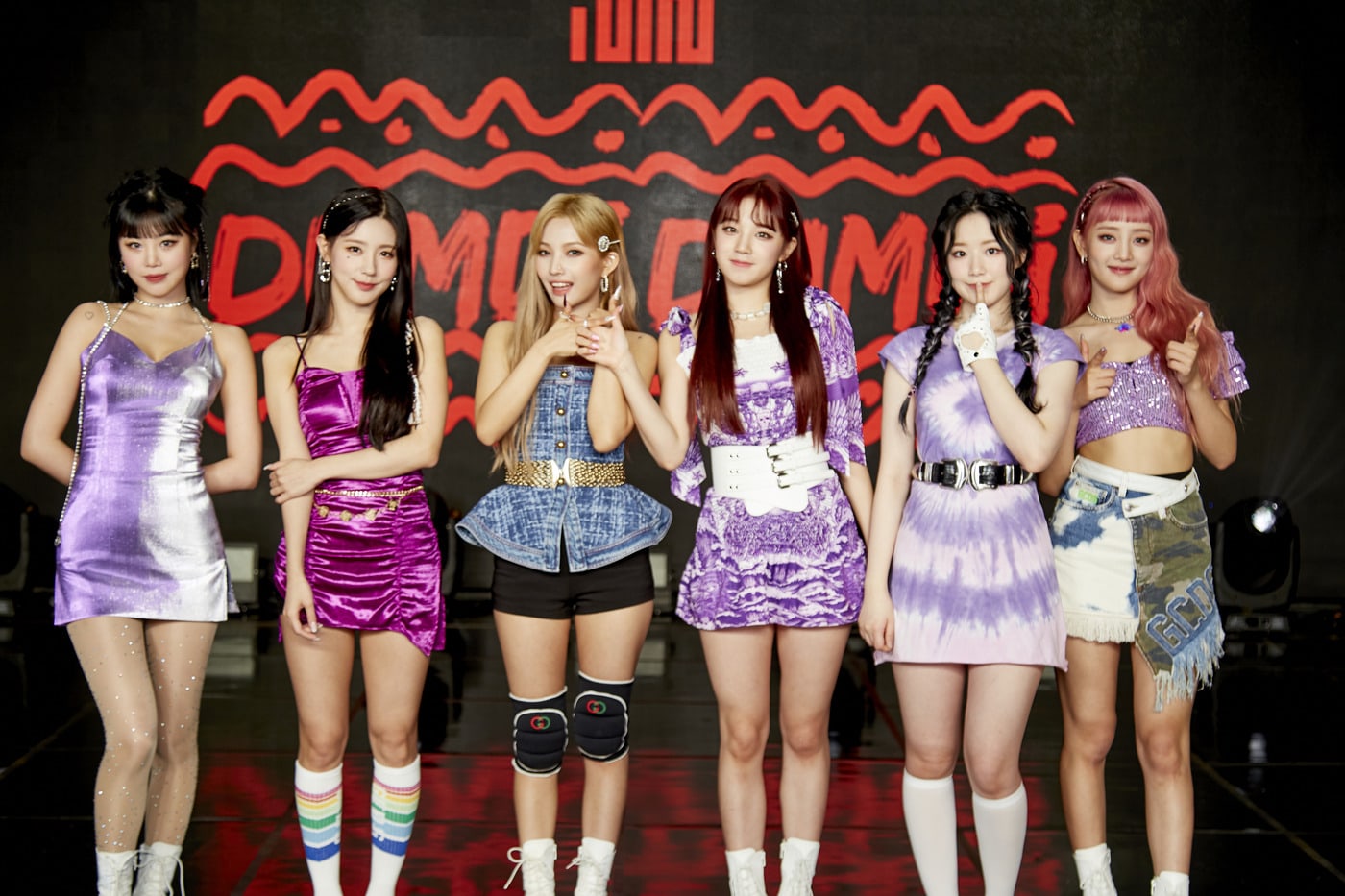 Composed by Soyeon and Pop Time, (G)I-DLE’s upcoming song “DUMDi DUMDi” is a tropical dance track with a Moombahton rhythm, making it perfect for the summer. Soyeon explained, “While writing a summer song this time around, I felt that ‘summer’ was similar to ‘youth.’ Youthfulness involves both a refreshing feeling and a passionate heat. I hope you’ll feel both ‘summer’ and ‘youth’ at the same time [through the song].”

Miyeon added, “Summer is my favorite season, so I feel like I’ll promote more happily and with more excitement this time.”

Soojin, who participated in coming up with the visual concept for this comeback along with the other members, shared, “We searched through a lot of photos to find a vintage look for our hair, makeup, and outfits. We wanted to show a summer vibe that’s uniquely (G)I-DLE’s.”

(G)I-DLE also revealed that they had a new reality show coming up, about which Yuqi shared, “We will show you a side of (G)I-DLE that you haven’t been able to see.”

Lastly, Soojin mentioned the group’s goals for their comeback with “DUMDi DUMDi,” saying, “I hope we get No. 1 on music charts, and I would like for us to earn the keyword of ‘unrivaled.'”

(G)I-DLE returns with “DUMDi DUMDi” on August 3 at 6 p.m. KST. Check out the teasers here!