9MUSES Shares Their Love And Thanks On 10th Debut Anniversary

9MUSES members took to social media to share their love on the 10th anniversary of their debut!

9MUSES made their debut on August 12, 2010, and they officially disbanded with the goodbye single “Remember” and a fan meeting in February 2019. On August 12 this year, many of the members posted to look back on memories and share love for each other and their fans MINE.

Kyungri began her Instagram post with “10th” and lots of heart emojis before saying, “So it seems that’s why I dreamt today about spending all day dancing with the members. I still remember the choreography. Thank you, MINE.”

Sojin wrote, “It’s such a shame that it would be difficult to hold a 10th anniversary fan meeting or concert in the current situation, but I’m feeling grateful to themembers that we’re able to still ask each other how we’re doing and share happiness as we tell each other about good news, and I’m also grateful to the greatest manager ever Sun Hee. Also, more than anything, I’m grateful to MINE, who strongly were together with us and stayed by our side for a long time despite all the many emotions! #10yearswith9muses.”

Keumjo shared a signed polaroid of the group in her Instagram stories and wrote, “I hear it’s 9MUSES’ 10th anniversary.” 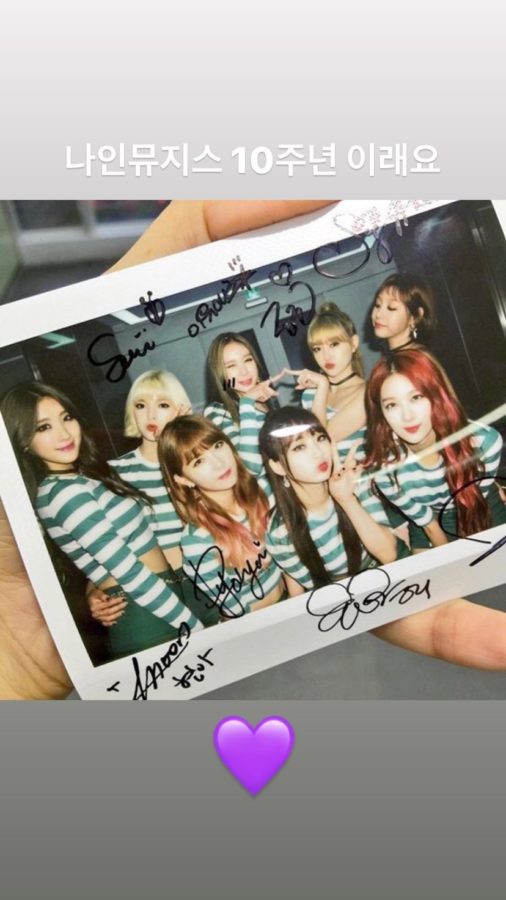 Minha wrote, “When I think of the past 10 years, which isn’t a short time, all of the scenes are so vivid. They’re not hazy memories—I clearly remember everything about that time, including the scenes, conversations, and atmosphere. We talked a lot about how it would be good to hold a concert or fan meeting for our 10th anniversary, and I feel very sad that it became difficult to do so. In our group chat today, everyone said that they were doing choreography practice in their dreams, and we chatted about how it seems like we dreamt that because it’s our 10th anniversary.

Moon Hyuna shared photos of the group, first expressing how she wished they’d taken more group photos together. She said, “I’m infinitely grateful that we can still talk with each other and that we are still by each other’s sides. MINE, happy 10th anniversary.”

On the caption for another photo, Moon Hyuna said that they’d wanted to do an event for their anniversary but they had to postpone it because they aren’t able to get together in the current situation. “I hope that we can be together again on a good day,” she said.

“I’m looking back on each and every thing thanks to it being 9MUSES’ exciting 10th anniversary, and our group chat’s also become noisy for the first time in a while,” wrote Moon Hyuna. “9MUSES, let’s take another photo in the exact same position as this one. I’m waiting for the day we all meet together again. I’m really grateful today.”

Hyemi posted to say, “Somehow… it’s already our 10th anniversary. Time really goes by in the blink of an eye. I’m so grateful to have 10 years of memories with the members and MINE. I miss you, members. We should meet soon. I miss you too, MINE. You’ve all worked hard over the past 10 years. Happy anniversary, I love you.”

Sungah wrote, “Happy 10th anniversary. thanks to MINE all over the world and to my soul sisters lots of LOVE.”

She also shared many Instagram stories from fans in her own stories, and so did other members including Sera.

Happy 10th anniversary?thanks to MINE all over the world and to my soul sisters lots of LOVE♥️

Eunji posted a chat conversation where someone had sent her a photo of herself. “I was like that back then,” she wrote. “This is a memory too. Happy anniversary.” She added in a hashtag, “I want to return to that body.”

LeeSem wrote on Instagram about her surprise over receiving so many messages wishing her a happy anniversary. As she hadn’t had the opportunity when she left the group, she took the time to thank many people, such as Star Empire’s CEO Shin Joo Hak, vice-president Lee Jung Hyun, managers, and many more. “Thank you for making it so I could receive a lot of love,” she wrote. “You’re all doing well, right?”

She went on to say, “And more than anyone else, to my members who were together with me—Rana, Hyebin [Bini], Jaekyung, Sera, Eunji, Moonjjang [Moon Hyuna], Hyemin [Euaerin], Sungah, Kyungri, Minha, Hyemi—thank you so much for making memories with me that I will never forget. Happy 10th anniversary.”

LeeSem added, “And to the sweet MINE all over the globe who are still sending support and are the best in the world, I’m always grateful and I love you.” 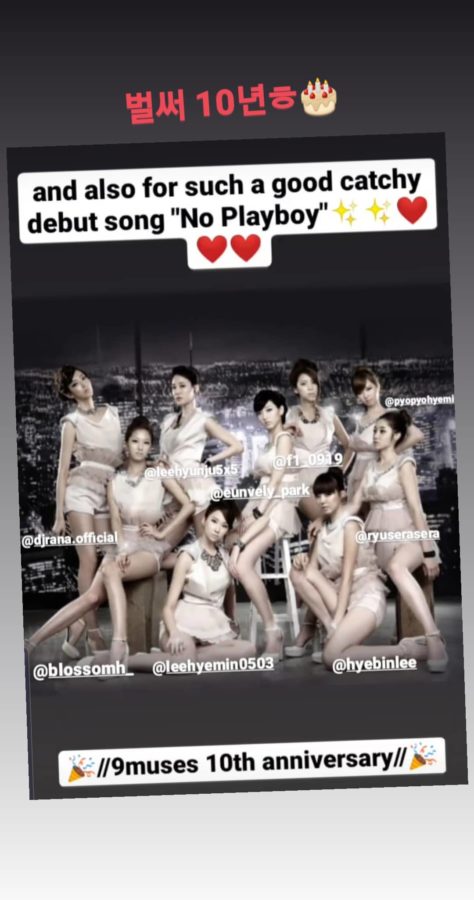 Euaerin posted some photos too and wrote, “When I was in my 20s, you were my friends, my real older sisters, my real younger sisters, and my family. We’ll be able to get together as a full group when the next one of us gets married, right? Who wants to do it? I miss you, so someone hurry up and do it.” She added in a hashtag, “Thank you everyone for wishing me a happy anniversary.”