BTS appeared on the August 14 episode of “I-LAND” and shared some welcome advice and wisdom for the trainees!

Mnet’s “I-LAND” is an “observation reality program” that follows the creation of a new boy group. It’s the first project by BELIF+, which is a joint venture between CJ ENM and BTS’s agency Big Hit Entertainment.

On the latest episode of the show, BTS first explored the state-of-the-art “I-LAND” facilities, having fun as they checked out where the contestants are living and training.

Many of the show’s trainees are fans of BTS, and the remaining top 12 contestants were thrilled when they were shown a video of the group visiting “I-LAND.”

BTS announced to the trainees through the video that their next mission is to cover one of three BTS songs: “I Need U,” “DNA,” or “Fake Love,” and they showed the contestants the key points of the songs.

Later on, the trainees were surprised again when they got the chance to watch a video of BTS answering their questions and giving advice on their concerns. 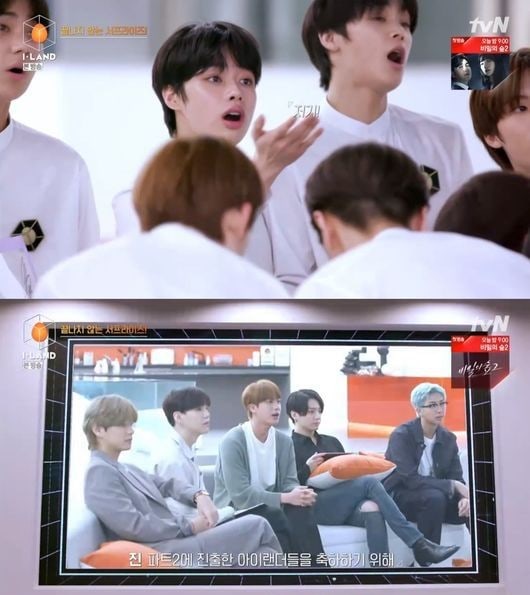 The first concern came from Heeseung, who wanted to learn more about developing good leadership that has a positive impact on others. The BTS members expressed how impressed they were by the fact that he was thinking about this.

RM responded, “I think the fact that he’s thinking about this shows that he has good leadership skills.” He went on to describe “good leadership” as being the person who steps up when something needs to be done.

“To be honest, I couldn’t do that well,” he confessed, but Suga and V told him that’s not true. “You’re the best leader I’ve ever seen,” said V, and RM thanked them.

The guys talked about how being a leader is a difficult role that involves a lot of responsibility and gives the leader no benefits. “That’s true, to be honest,” said RM. “That’s why all the team members have to help a lot.” 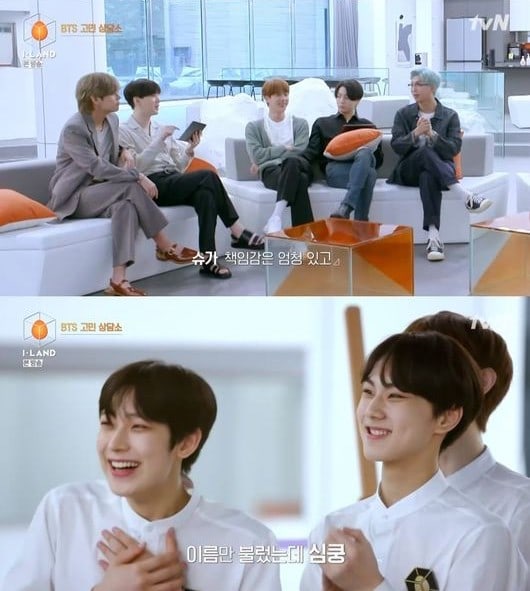 When Suga saw Daniel‘s age, he said, “Jungkook was 15 when he started.” Daniel had written, “I’m really interested in rapping but I haven’t learned it properly so it’s hard.”

Suga replied, “You have to write a lot. When I was a trainee, I wrote 16 verses a day.” J-Hope commented, “I didn’t know Daniel was like that. I’m watching everyone. I even know what everyone’s in charge of.”

Ni-ki‘s concern was that he wants to have strong muscles like the older contestants. RM assured him that’s just because of his age, and he only needs to get older.

When K wrote that his concern was that the others were too handsome, Suga said, “You’re handsome enough now. Even someone like me debuted.”

J-Hope laughed and said, “Me too. Look at me and have hope.” Jimin shared a reminder about BTS’s “Love myself” message.

J-Hope added, “If guys like this know that they’re handsome and start grooming themselves, then they’ll be really cool.”

V shared, “I’m more drawn to someone who looks charming rather than handsome,” and Jimin teased him about saying that when he’s both. 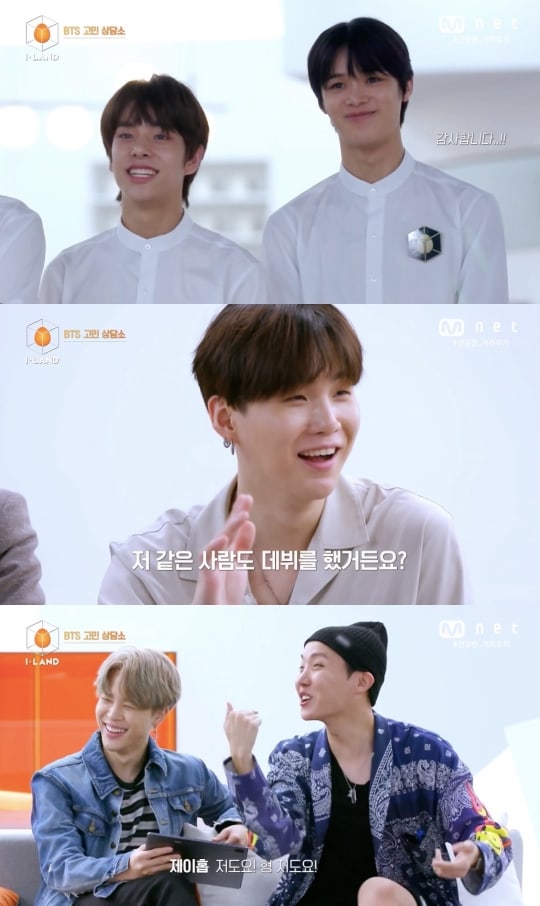 Ta-ki shared that he’s finding it hard to focus because he misses his parents and younger sister in Japan. He wrote, “This is the first time I’ve been away from my parents for so long, and I miss them every day.”

Jimin replied, “We really understand. We also only see our parents two or three times a year.”

RM shared, “There was a time when I ran away, six months before our debut. When my father saw me, he spent two and a half hours persuading me to go back.” He continued, “He told me, ‘I know you’re someone who wants to be there and has to be there. If you come back here then you’re going to resent me for the rest of your life.’ I still remember that.”

Suga said, “Of course it’s okay to miss them. But you need to realize what you need to do and get yourself together again.” Jungkook agreed that that’s the most important thing, and Jimin added, “Hang in there.” 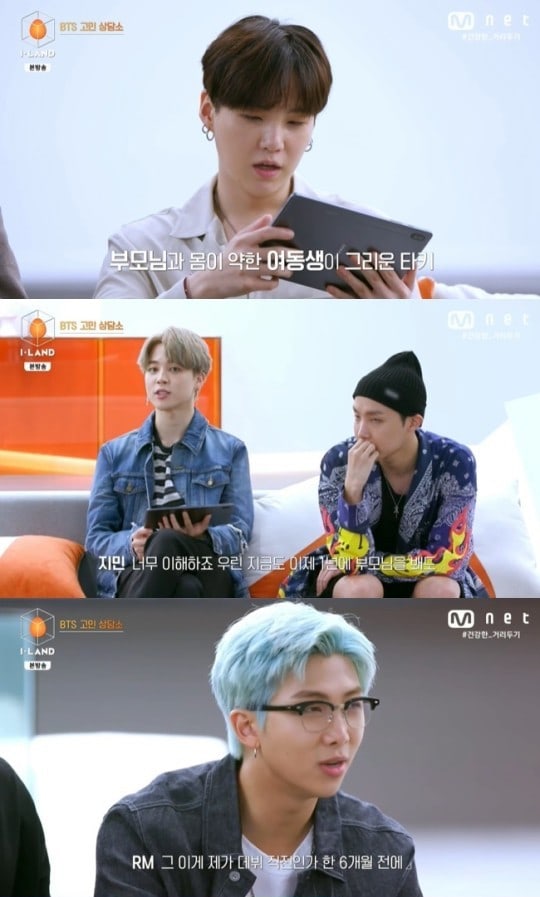 Jay asked BTS to share ways to avoid creating embarrassing moments that will be looked back on in the future.

Sunoo had written his concerns about his stamina, saying that he’s been weak since he was a child. J-Hope said, “As a frequent viewer of ‘I-LAND,’ I had no idea that Sunoo would have this kind of concern.” He said, “You need to control your pace. Eat well. I eat rice soup every day with dinner.”

BTS also prepared gifts for the contestants, and they were touched to get handwritten letters from the idols too.

Ni-ki received a set of modern hanbok (traditional Korean clothing) from Jungkook. J-Hope signed a pair of shoes that were gifted to Hanbin, and V left a gift of a polaroid camera and photos, which went to Daniel. Jake received a diary from RM, while Sunghoon got a Chimmy character body pillow as a present from Jimin. A bowl and spoon set from Jin went to Geonu.

BTS
I-LAND
How does this article make you feel?