Mnet’s “I-LAND” has made its first elimination of part two.

“I-LAND” is an “observation reality program” that follows the creation of a new boy group. It’s the first project by BELIF+, which is a joint venture between CJ ENM and Big Hit Entertainment.

For the mission, the group was divided into three units that would cover BTS’s “DNA,” “I Need U,” and “Fake Love.” Following a dance battle, Ta-ki, K, and Jungwon placed first, second, and third respectively, each earning titles as team leaders.

Ta-ki was assigned “Fake Love” and chose Heeseung, Sunoo, and Sunghoon. Jungwon, Geonu, Daniel, and Jake were to perform “I Need U” while Ni-ki, K, Hanbin, and Jay would perform “DNA.” Although the trainees were also to be ranked individually, the winning unit would receive immunity from elimination.

First to perform was the “DNA” team, whom the other trainees had consistently mentioned as the strongest unit. Following their performance, the producers commented, “My eyes feel really refreshed,” and the unit received a score of 287 out of 400.

Ahead of the performance of “I Need U,” Bang Si Hyuk shared, “‘I Need U’ is a song that became a great opportunity for BTS. Even performance director Son Sung Deuk cried a lot because of this song. I hope it becomes a good opportunity for you guys too.”

The unit gave their all with a powerful performance, but Bang Si Hyuk commented, “From my perspective, it’s a bit regretful. I wish that you would think about how the original song is done.” The team received a score of 275.

The final team to perform was the “Fake Love” unit. Although Son Sung Deuk was disappointed in this team while giving them feedback throughout their preparations, after watching their rehearsals, he praised them for practicing well. Ta-ki, who was given the role of leader for the first time during this test, had a hard time keeping up with his team, but Heeseung was able to step up and comfort his teammates into giving an impressive performance.

Following their performance, Bang Si Hyuk remarked, “Since starting ‘I-LAND,’ I really enjoyed today’s performance.” He added, “Today, I think that Heeseung showed that he’s a really talented person.” To Ta-ki, Bang Si Hyuk commented, “You are really good one day, and not so good the next. You go back and forth.” Ta-ki responded, “I’m the leader, so I’m upset that I’m not receiving great feedback.”

However, the other producers chimed in with their own compliments and the team ultimately placed first with a score of 306, receiving immunity from elimination for all the members.

After all the performances, they revealed the individual rankings and the eliminated trainee. They first shared the rankings of the “Fake Love” team with Heeseung announced as first place. He commented, “I will not be satisfied with being first place and I will work even harder.”

Sunghoon placed third, Sunoo placed fifth, and Ta-ki placed twelfth, but he was saved from elimination with his team immunity. While crying, Ta-ki apologized to whoever placed in eleventh, who would then be eliminated in his place. 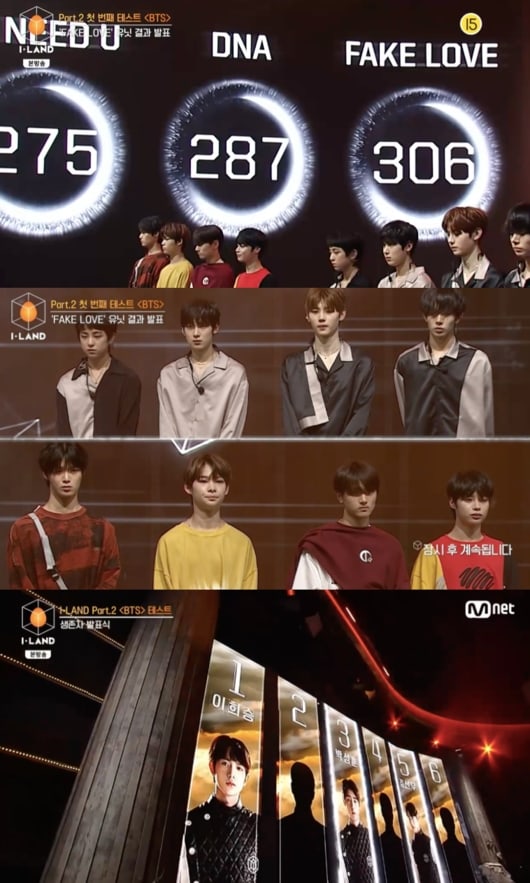 The final individual rankings were: 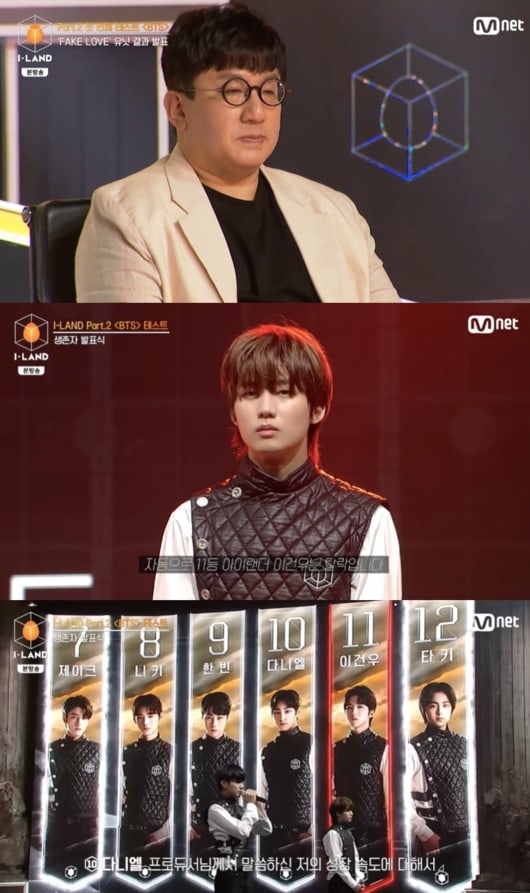 Although in eleventh place, Geonu was announced as the eliminated trainee. He commented, “I will work to improve on my own. I will rise to a higher place.”